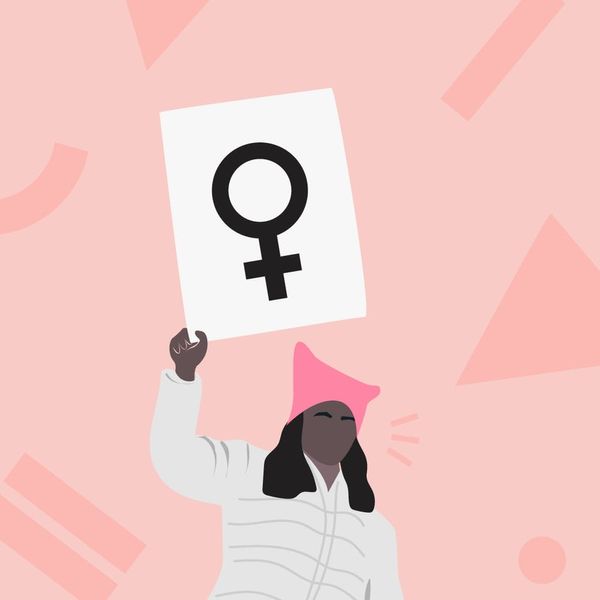 Whether you were in Washington D.C., Los Angeles, New York or even abroad, if you were at the Women’s March last weekend you were inevitably surrounded by a sea of pink “pussyhats.” The caps, while varying in their pinkness, all shared an identifiable shape: those two distinct cat ears. The hat became a uniform of sorts, identifying women and men who care about women’s rights. But something like this doesn’t just happen spontaneously. There are two women behind the movement. Their names are Krista Suh and Jayna Zweiman.

Suh is an LA-based screenwriter who, after hearing about the march, knew she wanted to get involved. In a video with The Atlantic, Suh says, “When news of the women’s march came up I knew immediately that I would go. I booked my flights, all that stuff. But I wanted to do something more that could help the movement. I couldn’t really think of anything until I realized as an LA girl flying out to DC that I was going to be really cold.” And with that revelation, the idea of rocking a custom beanie was born.

Suh and Zweiman wanted to create a visual statement at the DC march by having nearly every head cloaked in pink, a color that has always been synonymous with girl power. With that, they launched The Pussyhat Project. They created a website where people could go for a beginner-friendly pattern for free (to either knit, crochet or sew). Those personally attending followed the pattern and rocked it on the big day. Those who couldn’t attend in DC but wanted to show their support mailed finished hats along with a note about who they are and the issues they care about. Those hats were then distributed by the Pussyhat crew at the march.

It goes without saying that the project was a success. In fact, it was such a success it even resulted in a shortage of pink yarn at knitting supply stores across the country. The sea of pink was spotted not just on millions of marchers across the globe, but also on celebrity attendees like Amy Schumer, Mandy Moore and Chelsea Handler. Almost immediately the hats became a symbol of feminism in the same way Trump’s red hat has become synonymous with somewhat of the opposite.

So what happens now? The Pussyhat Project isn’t slowing down just because they made their statement. Following in the steps of the Women’s March, the project is now focused on becoming not just a moment but a movement. They received 15,000 sign ups for their newsletter in the 48 hours after the march. They’re now asking the community to continue making pussyhat and to join knitting circles. “Use your knitting circles as an opportunity to get together to write letters to government leaders about women’s rights issues,” the founders write on the website. “Welcome non-knitting women’s rights supporters to your group to brainstorm actions you can take.”

So rock your pussyhat with pride. And when you slip it on remember everything we have to fight for over these next four years… equal pay, healthcare, full control of our reproductive rights. Let it serve not just as a statement of girl power and feminism but also as the catalyst that ignites real activism from the masses. Because without that, we will see no change.

Cortney Clift
Cortney is the senior writer and special projects editor at Brit + Co. She typically covers topics related to women's issues, politics, and lifestyle. When she's not buried behind her computer you'll find her exploring New York City or planning her next big adventure.
Politics
More From Politics