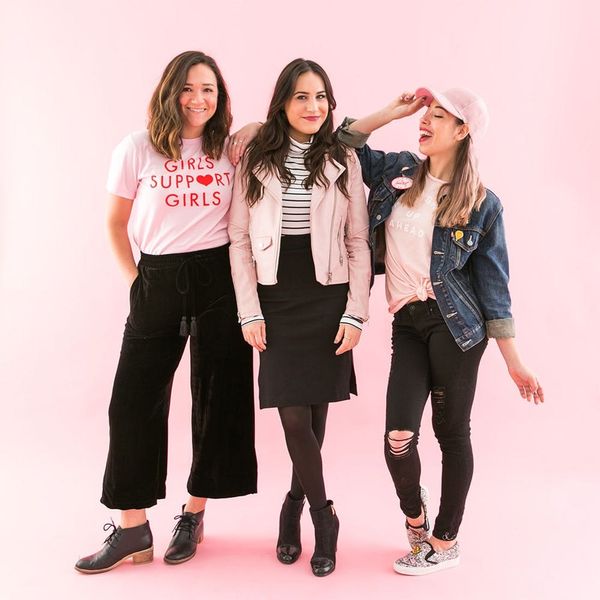 “I just bought a candle called Boy Smells,” my friend Kate recently told an Uber full of editors. “It was like $30, and all the packaging is millennial pink.” Millennial pink. It wasn’t a phrase I’d heard before, but I didn’t have to ask what she meant. It was immediately obvious to me. Everywhere I’d seen the color over the last year started flipping through my mind. Glossier ads, Ban.do’s Instagram feed, Everlane’s newsletter… you’ve seen it too. It’s the pink that’s not quite pink. Well, more like a spectrum of pink really – from that salmony shade to a washed-out cotton candy color. It’s a pink that’s shaping up to symbolize a whole new era of empowered women.

I looked up Boy Smells after Kate mentioned it. She was right. From the box to the label, the brand’s site was drowning in “millennial pink.” But contrary to what the name might have you believe, the candles aren’t scented like Axe body spray and teenage angst. Instead, the sophisticated scents available could easily be incorporated in a Goop gift guide.

Is it surprising that a brand that — at first glance — appears to be embracing masculinity has chosen a traditionally feminine color to represent itself? No, because it’s the exact way the color is being used by brands and women everywhere.

We’ll start at the obvious starting place, with Glossier. The anti-makeup makeup brand has gained a diehard following for their barely there products since launching in 2014. In a recent Instagram story, Glossier’s founder Emily Weiss shared a slide from a presentation explaining the Glossier mission. It read, “To reinvent the beauty experience for girls who aspire to be proud of who they are today.”

When I asked the ladies of Glossier what initially drew them to the color, they replied, “Glossier pink isn’t an everyday pink, and we went through many shades to find the right tones. It is gender neutral; it’s for boys or for girls. We also think it stands for something — it’s about embracing your particular approach to beauty, of being okay with you who are.” If this pink could have a mission statement, it would be precisely that.

This is not the oversaturated pink we’ve known for the last 60 years, that eyesore of a color associated with Barbie’s convertible, the wardrobes of ‘50s housewives and polyester prom dresses. Instead, it’s a progressive take on what pink meant for generations past. Simply put, it’s an emboldened stance on what femininity means in the 21st century. You might even call it a reclaiming of pink. It’s a pink that has become synonymous with feminism and girl power.

But where did it all start? With Pantone, where most trends are born, whether you realize it or not. The leading authority on color chose two “colors of the year” for 2016, a baby blue by the name of “Serenity” and a dusty pink known as “Rose Quartz.” The idea: Together they represent harmony and balance. Read into the gender undertones of that however you like. Dusty rose is a bit more saturated than the almost beige shade we’re starting to see today, but it’s what got marketers and big brands on board.

Cult-favorite millennial brand Ban.do cranked up the color’s prevalence. Notoriously neutral Everlane now has an entire edit dedicated to it. It’s also the color representing those controversial subway ads for Thinx (the period panties). All three companies have different missions, with one exception: They all cater to millennial women who are tired of the patriarchy.

Enter: the diffusion of the color in pop culture. Solange is cloaked in power pink all throughout her acclaimed video for “Cranes in the Sky.” Brie Larson wore it the night she took home an Oscar for Room. Lady Gaga dons it on the cover of her newest album Joanne. It’s tied to practically everything girlboss Sophia Amoruso touches. And NYC’s buzziest, girls-only social club The Wing is practically dripping in it.

It’s not just Pantone’s authoritative influence that led to a pink explosion. In this Trumpian era where women’s issues are more at risk than ever, this color is serving as a sort of shield — a badge of honor, if you will. It’s about embracing all things “girly” without abandon, embarrassment or tentativeness. As Véronique Hyland of The Cutwrites, it’s “a moment of ambivalent girliness.” This pink is a symbol of power. Wear it with pride to your executive office job, while you’re walking in the women’s march or when you cross the finish line of that ultra marathon that’s on your 2017 resolution list.

Given the depth of this color and our growing disdain for attaching our generation’s name to literally everything we touch, we’re going to ditch the term “millennial pink” from here on out. (Sorry, Kate.) In its place, something a little punchier: power pink.

We are women. We like pink. Deal with it.

Cortney Clift
Cortney is the senior writer and special projects editor at Brit + Co. She typically covers topics related to women's issues, politics, and lifestyle. When she's not buried behind her computer you'll find her exploring New York City or planning her next big adventure.
Feminism
Entertainment
Feminism
More From Entertainment