Red Velvet Cake — The Devil’s Food Is in the Details 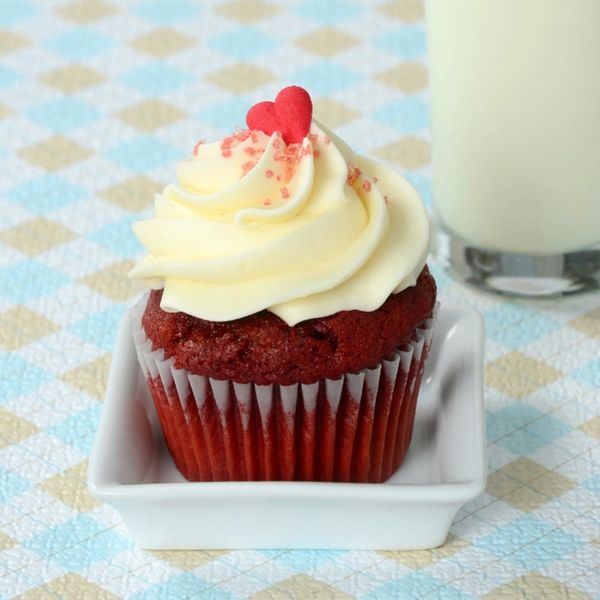 There appear to be as many recipes for red velvet cake as there are Southern meemaws. And they vary quite a bit when it comes to amounts of cocoa and whether or not to use buttermilk. But at heart red velvet cake is simply a more crimson shade of devil’s food, and the secret to making both delicious is to use the very best cocoa powder you can find — though, for red velvet, not too much of it. Red velvet cake is a taste sensation, but its color is key to its attraction. The gaudy red hue makes it perfect for Valentine’s Day treats, such as these red velvet brownie-cookies, er… um, brookies.

Theories abound regarding the origins of red velvet cake and what gave the first cakes their color. Today almost all recipes call for red food coloring, and a lot of it, but that wasn’t always the case. Back when the cake originated, which food historians place about the 1920s, the name derived from the reddish tint that the natural cocoa powder of the time gave it. The cocoa we use today is very different; the alkaline processing causes today’s cocoa to make everything baked with it a rich, dark brown. Thus, we modern-day bakers must add something to get the red back. Another alternative theory that sounds plausible is that during WWII, when sugar was in short supply, chefs in fancy hotels like the Waldorf Astoria used whatever they had available to help sweeten recipes. One sweet vegetable readily available in “victory gardens” was, you guessed it, beets. Whether you believe the color originally came from old-time cocoa or from war-time rationing, there’s no denying the crimson color makes the cake seem more decadent.

A common element in red velvet cakes is the icing, which nowadays is almost always a rich cream-cheese frosting. Traditionally, though, a red velvet cake would have been topped with a butter-roux icing. Also known as boiled-milk icing, it is much lighter and fluffier, but very time-consuming to make, requiring the chef to cook milk and flour together, then beat it into some creamed sugar and butter.

Whether you are using beets or food coloring, cream-cheese frosting or butter-roux icing, if you are whipping up a red velvet delight this Valentine’s Day, we would love to see it.