Remembering the Victims of the Las Vegas Shooting 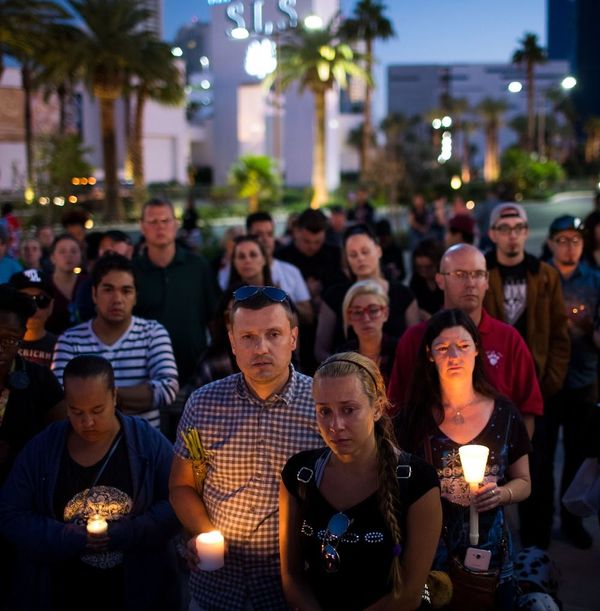 On Sunday night and Monday morning, the world felt the shock of hearing of the horrific mass shooting that took place in Las Vegas on Sunday night. As of press time, 59 people have died and 527 were injured in what is being called the worst mass shooting in modern American history. Though celebrities and public figures have expressed condolences for the victims and their families, it’s important to remember who they were as individuals. Here’s who they were:

Sonny was a 29-year-old married nurse from Tennessee. He was in Vegas with his wife, Heather Melton, an orthopedic surgeon. Heather survived the attack because of an act of bravery by her husband. She told CNN, “He saved my life. He grabbed me and started running when I felt him get shot in the back,” she said. “I want everyone to know what a kind-hearted, loving man he was, but at this point, I can barely breathe.” (Photo via Facebook)

Hannah, 35, was a daring woman who loved skydiving, poolside vacations, and all-around fun. The mother of three leaves behind her kids and her husband of 16 years, Brian. A friend told the LA Times that Hannah was “possibly one of the most beautiful women I have ever seen, with a heart to match,” adding, “she was a devoted mother and wife.” (Photo via Facebook)

This 25-year-old from Canada’s west coast spent his final moments with another concertgoer, who, in the confusion, ended up by McIldoon’s side. Heather Gooze didn’t want him to end up alone and become a John Doe, so she stayed by his side, relaying his death to his mother when she phoned.

34-year-old Carrie was celebrating a friend’s 30th birthday in Vegas when they were caught in the tragic events of October 1. The eldest of three siblings, Carrie had spent the last 11 years working at Disneyland in her native California.

This West Virginia mother and grandmother was at the country festival with her husband of 32 years, Tony, who snapped a pic of them just hours before the shooting took his wife’s life. Taking to Facebook, Tony said of his partner, “It saddens me to say that I lost my wife of 32 years, a mother of two, soon to be grandmother of five this evening in the Las Vegas shooting. Denise passed in my arms. I LOVE YOU BABE.”

A middle school teacher who worked with special needs kids, Sandy was “loved by students and colleagues alike and will be remembered for her sense of humor, her passion for her work, her devotion to her students, and her commitment to continuing her own learning and to taking on whatever new projects came her way,” the Manhattan Beach Unified School District said in a statement. “She has made a tremendous difference in the lives of her students and their families, many of whom worked with her over multiple years.

Dana Gardner had suffered through a mass shooting before. The San Bernadino native worked as the deputy recorder-county clerk during her hometown’s 2015 shooting. She was at Route 91 with one of her daughters, who was uninjured during the shooting.

Father of four Tom was with all of his adult kids, all in their 20s and 30s, at the country music festival in Las Vegas this past weekend. Tom’s dad, Tom Sr. lives in the greater Las Vegas area and is currently mourning with his grandkids. (Photo via Facebook)

The 34-year-old military vet, football coach, and off-duty LVPD officer was at the fest with many other off-duty officers. “I don’t know a better man than Charles. They say it’s always the good ones we lose early. There’s no truer statement than that with Charles,” Hartfield’s friend Troy Rhett told the Las Vegas Review-Journal. “Our hearts have just been very heavy since hearing the news.”

Only 20 years old, the Californian graduated high school in 2015 and was currently enrolled in community college classes.

Also 20, Bailey was a receptionist with software company Infinity Communications and Consulting in her hometown of Bakersfield, CA.

Jennifer was a joy to her friends and colleagues according to her friend, Kyle Kraska. He told the San Diego Union-Tribune that she was like a little sister to him and that the 42-year-old family law attorney was adored.

This single mother of four from Alberta, Canada had finally found love again after years of flying solo. Her fiancé, Brent Irla, took her to Las Vegas for the Route 91 Harvest Festival and was by her side when she died. (Photo via Facebook)

The resident from Tewksbury, Massachusetts was with her husband, Jason, at the concert. He thought she had ducked when he had, but unfortunately, Rhonda was shot.

This Alaskan fisherman had gone to Las Vegas with his childhood friend, Brian MacKinnon, to attend the festival. Of his friend, MacKinnon said, “He made me laugh. He was like an Alaskan cowboy, but when he saw a dog he’d turn into a 10-year-old kid.”

The New Yorker, 56, was with his son Travis, an EMT, dancing away at Route 91 when shots rang out. Travis managed to get his father, who’d been shot in the lower back, into a car and to the hospital, where he later died of his injuries. Travis was shot in the arm, but didn’t realize it amid the chaos because he was too busy helping his injured father.

With an incredibly heavy heart. My sweetest nephew has passed away. He was the most kind and loving soul. Everyone who…

Quinton was the first Las Vegas native to be identified after the attack. The 20-year-old had recently graduated high school.

This New Mexico high school secretary was loved by the administration and students alike at Miyamura High School.

Neysa was the mom of three, and worked for a technology company. A GoFundMe has been set up to help support her kids in the wake of her death. (Photo via Facebook)

After surviving a tour of duty in Afghanistan, this military vet was in Las Vegas with his mom to celebrate his upcoming 29th birthday.

Here’s how to help the Las Vegas victims, and how to take care of yourself in the wake of the weekend’s tragedy.