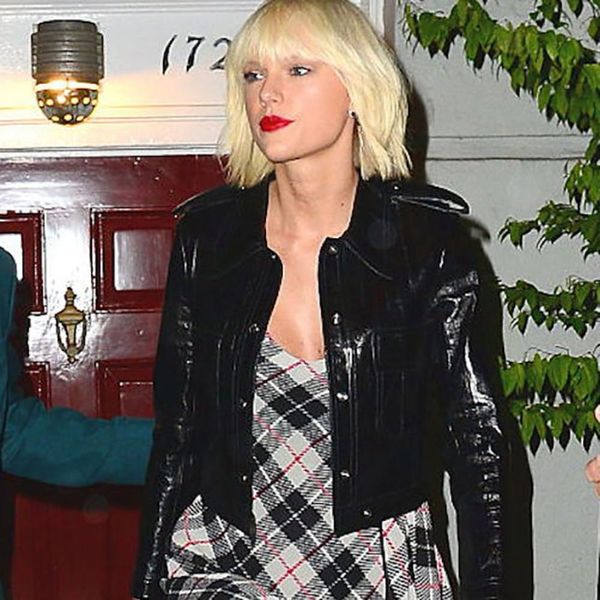 Taylor Swift’s goth transformation seemed to happen the moment her May Vogue cover was released two months ago. In the photo, she traded her dusty locks for a striking new bleach blonde look and her usual two-piece ensemble was replaced with a dark slip dress and black leather boots. This was a totally new Taylor — and it wasn’t just reserved for the glossy pages.

The pop star famous for her goody-two-shoes style (think: gingham everything, cat-themed accessories and circle skirts galore) was suddenly an edgy style icon. Her title as the neo-goth poster child was quickly solidified as she walked the red carpet of the 2016 Met Gala.

In a silver dress and ultra vampy lips, the new Taylor had officially arrived. But what sparked this transformation? Word on the street was Anna Wintour told Tay she needed to add a little more edginess to her look. And when Anna tells you to do something, you do it. But if you ask us, this phase may have been her way of mourning the death of her relationship with Calvin Harris.

We’re not sure exactly what went down between the two of them, but something did for sure. Was Taylor changing her style in an attempt to keep Calvin interested? Was she playing out an IRL version of the final scene in Grease? Who knows. But we know one thing is for sure: That version of Taylor died with Talvin.

Ever since Taylor and her new official (but not technically official) beau have coupled up, Taylor has been seen not in violet lipstick and ’90s choker necklaces but instead in — you guessed it — crop tops and skater skirts, flirty sundresses and adorable loafers (which is a weird beach footwear choice, but that’s beside the point). She even recently dyed her hair back to its original color. Basically, Tom killed goth Taylor.

Was the Brit not such a fan of her vampy makeover? Well, he met Taylor at the Met Gala (AKA peak style transformation), so that’s probably not the case. Could her new lease on love be affecting her style? That’s probably a little more likely. We’ll never fully know the reason for goth Taylor’s swift descent (wow, so proud of that pun, y’all), but we will miss her dearly. See you after the next breakup, GTS.