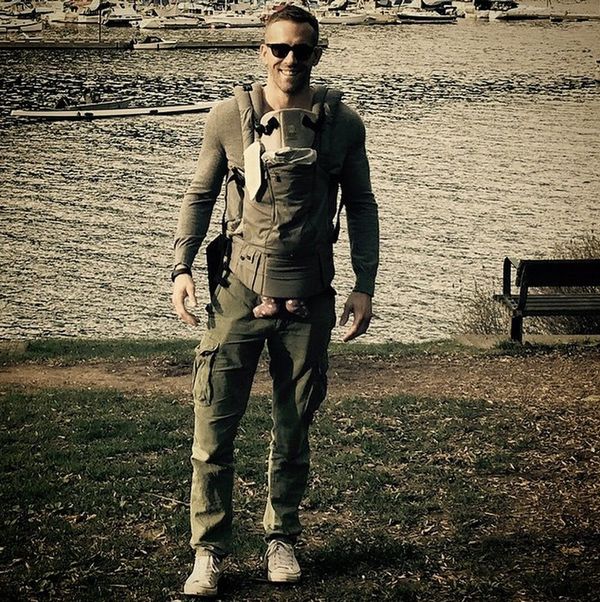 There is no handbook for parenting. Every mom and dad have been painfully aware of that at one point or another. Whether your little one picks up on a swear word you’ve accidentally let slip one too many times or covers the dining room table in permanent markers, being a parent is a definite “figure it out as you go” type of job.

Ryan’s carrier is from LÍLLÉbaby, a Scandinavian brand that’s popular among celebrities. The main problem with how Ryan has positioned baby James can be seen in the placement of her feet. Typically the baby’s feet are meant to stick out the sides rather than straight down through the waistband.

A rep from LÍLLÉbaby tells us that Ryan is indeed wearing the COMPLETE All Seasons carrier from their collection. Marketing Director Kelly Warren explains, “The LILLEbaby carrier has three options for positioning baby’s legs: fetal position, infant seat and toddler seat. It appears that the baby [James] is positioned incorrectly according to our instructions as the legs are sticking out under the belt. The LILLEbaby carriers has a harness strap on the inside that keeps the baby secure in addition to securing baby with the proper leg positioning.. We have reached out to the happy couple to help them learn the best way to use their LÍLLÉbaby.”

We’re sure that Ryan meant well and, like the rest of us, is figuring things out as he goes. Anyone who has ever tried to put together a crib or struggled with a baby gate (you know you’ve all been there) knows that sometimes baby-related products aren’t the most intuitive to use. So to anyone who is worried about baby James’ safety, we’re pretty sure that after the 6,000+ comments the photo received (most of which were advising the couple of their mistake), the infant is probably now traveling with her feet in a much more comfortable position.

*Update: A prior version of Warren’s quote has been updated at LILLEbaby’s request.

Cortney Clift
Cortney is the senior writer and special projects editor at Brit + Co. She typically covers topics related to women's issues, politics, and lifestyle. When she's not buried behind her computer you'll find her exploring New York City or planning her next big adventure.
Father's Day
Parenting
Father's Day