25 Books That Are Required Reading for First-Time Dads 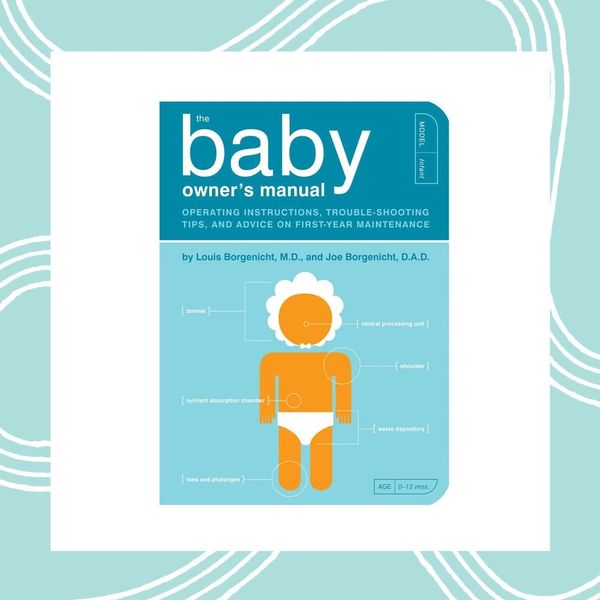 If knowledge is power, then one of the best gifts you can give a first-time dad is a book to prepare him for the monumental challenges ahead. Sure, a marathon viewing of classic, dad-tastic movies like Three Men and a Baby, Father of the Bride, and Mr. Mom might help a little, but let’s face it: The more information a new parent has absorbed ahead of time, the better prepared they’ll be for those moments of “What have I gotten myself into?” So, fire up that Amazon wishlist and add a dozen or so guides to the queue. It’s time to drop some knowledge on the dads of tomorrow.

Okay, maybe comparing parenting to coaching is kind of cliché, but hey, if sports references work for you, why not give this book a whirl to help you get your head in the game? Bonus points if you’re a 49ers fan, since there’s a foreword from Hall of Famer Steve Young.

Focusing on the months leading up to the little one’s arrival, this guide walks dads-to-be through all the usual trials and tribulations of pregnancy, from morning sickness and doctor visits to packing the overnight bag and choosing a name. And as the cover design indicates, it definitely doesn’t take itself too seriously.

Oh, if only babies were as simple to figure out as a new Bluetooth receiver. Unfortunately, they’re not. But that doesn’t stop this father-and-son duo (one of whom is an actual pediatrician) from laying out the basics of first-year parenting in a user-manual format. And in the end, babies are a lot more fun than electronics anyway, right? Minus all those diaper changes, of course.

Less of a how-to guide and more a hilarious look into a new dad’s life through perfectly captured moments of humor, goofiness, and outright defeat, this book offers an important reminder for those moments when everything’s going wrong. For example, you’re not going to be the first dad to put the wrong milk in your coffee.

The times, they are a-changin’. And with more stay-at-home dads rocking the homestead than ever before, it only makes sense that books like this are on the rise as well. Based on Kulp’s popular blog about the pitfalls of stay-at-home parenting, this crash course in all things kiddo-related is perfect for the dad who’s ready to nail his new full-time gig.

Kind of like the old standby What to Expect When You’re Expecting (except for dudes), this book’s got something for everybody, including adoptive parents and “two for the price of two” fathers. Inclusive of all types of dads, it gives a straight-shooter’s perspective on everything from psychologically preparing for parenthood to the nuts and bolts of labor and delivery.

Just like it sounds, this straightforward and often tongue-in-cheek guide gives practical advice ranging from notes on sex and sleep deprivation to facts, tips, and pointers on daily dealings with baby pee, poo, and other bodily functions. It’s a tough job, but look, somebody’s gotta do it.

One day, your fridge is filled with beers, and nine months later, they’ve been replaced by baby bottles. This book, in particular, is geared toward the quintessential man-child who’s still clinging desperately to his youth. Mancini, a man who claims he “personally raised the bar for pre-baby anxiety” is doing his best to calm his fellow dudes down and prepare them for the miracle of birth and parenthood. Written in the style of a stand-up comedy routine, this easy read is packed with far more insight than the six-pack on its cover might lead you to believe.

Written by the executive editor of Parenting, this book is chock-full of good information. But don’t snap it up looking for long-winded explanations of every baby-related topic under the sun. Instead, Shawn Bean takes the IKEA instruction manual route and uses as few words as possible, relying on simple illustrations to get his spot-on (and often really funny) point across. For men of few words, this guide is golden.

From fertility issues to epidurals, this modern classic covers it all in an easily digestible but authoritative tone. Leaving the jokes to other authors, Brott and Ash have produced a no-nonsense, month-by-month guide to becoming a parent by offering a comprehensive view of physical, emotional, financial, and medical matters faced by fathers-to-be. Heavy stuff? Sure it is. But so is becoming a parent!

You may know comic Jim Gaffigan from any number of places: That ’70s Show, Portlandia, or even his role as middle-school-crush-turned-sad-cabbie “Chris Grandy” from 13 Going on 30. But you may not know about the role he plays as a father of five — count ’em, five — kids in real life. Needless to say, he’s got some experience in Dad Land, and he’s got some stuff to say about it too. In its own words, the book is “sharply observed, explosively funny, and a cry for help from a man who has realized he and his wife are outnumbered in their own home.”

For the overzealous father-to-be who just can’t help but plan ahead, this Wired-approved idea book is filled to the brim with smart, geeky projects for dads (and moms!) to try out with the kiddos when they’re old enough. It acts as a beacon of light to get a new parent through those first overwhelming months stuck in the never-ending cycle of eating and pooping, pooping and eating (not to mention looking after the baby!). With the promise of electronic origami and home hydroponics, this book will help carry even the geekiest and most terrified new dads though the first year by showing that the future holds plenty of geektastic parent-child bonding ahead.

The L&D room isn’t exactly the place for dad to flake out. And he totally won’t. At least not with this book in hand. It’s concise, easy-to-follow, and filled with totally helpful illustrations too. And like the name says — it will give that proud papa-to-be the info he needs for helping out during childbirth.

Author and dad coach Craig Wilkinson tackles everything from pregnancy through actually taking care of the baby. Soon-to-be dads can learn about that emotional roller coaster their S.O. is going through, how those physical changes affect her body, and what to do with the baby when the little bundle finally gets here.

The earth-shattering love that a father feels for his little darling doesn’t always happen right away. For author Philip Toledano, it took more than a year. Instead of a how-to or a day-by-day pregnancy and newborn care planner, this book for daddies delivers a true story of one reluctant father’s journey through the mire of confusion.

Ah, the life of a parent. You’ve read the should be’s, would be’s, and supposed to be’s. But what about the realities? Author and dad Michael Lewis started recording what happened after the birth of each of his three kiddos. Not the, “ohhhh, this is so magical” stuff, but the real things that dads go through. It’s funny, real, and so, so, so true.

Okay, so yes this has the words “for new moms” in the title. And technically it is for the mamas out there. But it’s also a pretty rad how-to for any guy who wants to sweep his lady off her feet — without all the over-the-top romantic junk that new moms could care less about. And no, this isn’t page after page of nude, buff dudes. Instead, it focuses on the fantasies of what real moms want (like changing diapers) and what real dads should know about.

There’s a whole new vocabulary that comes along with being a parent. And while it may seem like all soon-to-be mamas (and the new ones too) know the lingo, dads are often left in the dark. Until now, that is.

Get a grip on what having a newborn means with this pick. Not only does author Anthony Kim teach new dads about newborns, but he also covers plenty of self-care topics.

There’s a reason why there are 18.5 million copies of this book in print: It has must-have information related to every pregnancy-related question you could think of, and it has been updated to include current lifestyle trends like push presents, health food fads, and IVF pregnancy.

Help the dad-to-be relieve a little sympathy pregnancy stress with this coloring book with funny drawings and (soon-to-be) relatable text.

This book provides great advice with humor and empathy, written by the guy who created Diaper Dude, a line of hip baby gear designed for dads. Your dude will learn what to expect with each trimester and how to be the best partner.

Super Bowl champion Benjamin Watson shares his game plan, with plenty of other sports metaphors, for being a new dad. Watson and his wife have five children, so he’s a pro dad in addition to being a pro athlete.

Late night TV host and funnyman Jimmy Fallon did everything he could to ensure his daughter’s first word was “Dada,” and this cute illustrated book is perfect for Daddy and baby reading time.
From Your Site Articles
Amy Lynch
Amy is a freelance writer and editor, telling the stories of progressive people and projects that move the world forward. Her work has appeared on The Hairpin, Refinery29, Citygram and more, and she's developed content for the likes of Alternative Apparel, Milkshake and Silvercar. She lives, works and plays with her fiancé and their dog, Bogey, in the weird, wild heart of Austin, Texas.
Books
Parenting
Books Fathers Day Goods New Parents Parenting