How to Cook With the Wildest-Looking Produce on the Market 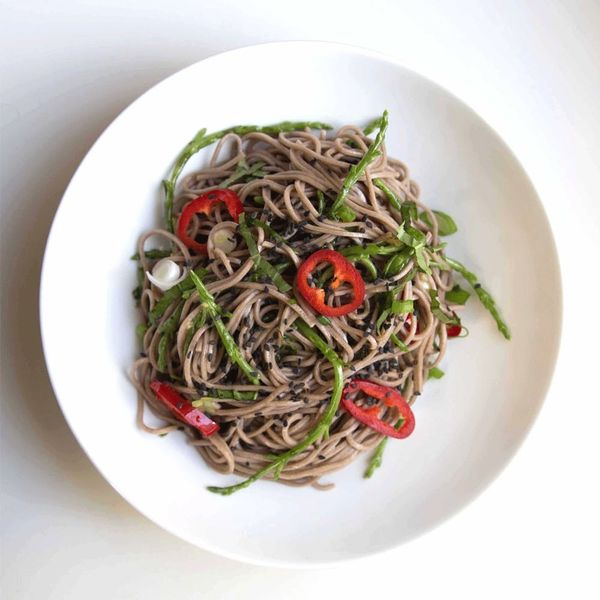 Cookboomarked! is our new series where we review the latest cookbooks from the foodie influencers you follow. Check back often to find out which new releases are worth your hard-earned cash and the recipes you should try first from each.

Berkeley Bowl, the famous grocer in Berkeley, California, is known for its vast produce section that displays exotic fruits and vegetables, precisely 1200 rare varietals to be exact. Many engage curiosity with their color (like pink dragonfruit) or diminutive size (Indian eggplant). Others suggest skepticism with spikes (like African horned melon) and require gardening gloves to handle them (prickly pear). And then, some resemble a rough-textured stick (burdock root). The store’s motto,“If we can find it, we’ll buy it,” encourages its customers to try new things, but it can be intimidating to purchase produce you don’t know how to prep. That’s why when Laura McLively’s cookbook The Berkeley Bowl Cookbook ($35) came our way, we were giddy at the thought of discovering lots of unusual produce that we’d previously passed over. The book acts as your friendly source for demystifying esoteric fruits and vegetables.

Digging into the Bowl

McLively has been chronicling her discovery of exotic fruits and veggies on the food blog My Berkeley Bowl since 2014. The book expands on her posts, providing tasting notes, availability, selection, storage, and substitutions for the produce. The 97 recipes in The Berkeley Bowl cookbook reflect a multicultural approach, sometimes taking an ingredient like the large spongy Asian vegetable bac hà and introducing it into a Spanish garlic soup where stale bread would have traditionally taken its place. Or how about the idea of the firm flesh of aloe chopped up into a mango ceviche and using starchy yucca to make buñuelos, sweet fried dough balls?

When we flipped to the recipe for a sea bean and soba salad… we knew we had to make it. If you’ve never had a sea bean before, these slender aquatic succulents taste like ocean water is captured inside each green stem. McLively describes them as a “salty pop,” and we love eating them raw with little adornment. If you find them too salty, you can extract some by blanching them in hot water for one minute, then shocking them in ice cold water.

This salad hits all the right spots: There’s heat from the Fresno chiles and the briny brightness of the sea beans stand out as the crunchy star of the salad. We liked how easy it is to cook, prep, and toss this recipe together. Plus, sea beans are a good entry into the world of exotic fruits and vegetables. And really, The Berkeley Bowl cookbook is one part recipe and one part reference, a book we think you’ll turn to again and again for fresh inspiration to mix up your fruit and veggie game.

Bursting in the mouth with a salty pop, sea beans are a playful addition to salads and stir-fries. Here, the tiny aquatic succulents are tossed with buckwheat (soba) noodles and sesame in a bright and satisfying salad.

Storage: Wrap in a damp paper towel and refrigerate in a plastic bag for up to 1 week.

1. Cook the soba noodles in boiling water for 1 minute than indicated on the package directions, or until they are al dente. Immediately drain and rinse with cold water to stop the cooking. Drain well and toss with the sesame oil. Cover and refrigerate for at least 1 hour or overnight.

2. Heat a small skillet over medium heat. Add the sesame seeds and toast until fragrant, shaking the skillet to avoid burning (about 1 minute). Set aside to cool.

3. To serve, place the noodles in a large serving bowl and add the sea beans, green onions, Thai basil, and chili. In a separate bowl, mix the lime juice, vinegar, soy sauce, honey, and ginger. Pour over the soba noodles and vegetables, and toss to coat evenly. Sprinkle with the toasted sesame seeds and serve immediately.

(Recipe reprinted from The Berkeley Bowl Cookbook by Laura McLively, by permission of Parallax Press. Photos of the cookbook, Laura McLively, and spores and succulents by Erin Scott.)

Annelies Zijderveld
Annelies Zijderveld is the author of Steeped: Recipes Infused with Tea. Her food writing and photos have been featured in Paste Magazine, The Kitchn, TODAY, Darling Magazine, AllRecipes, and other publications, She whisks together food and poetry on her blog, The Food Poet, and on Instagram at @anneliesz.
Books
DIY Recipes
Books Cookbookmarked Vegetarian Recipes
The Conversation
More From DIY Recipes