Disco Ball Suits + Drone Models: This Is How Silicon Valley Does Fashion Week 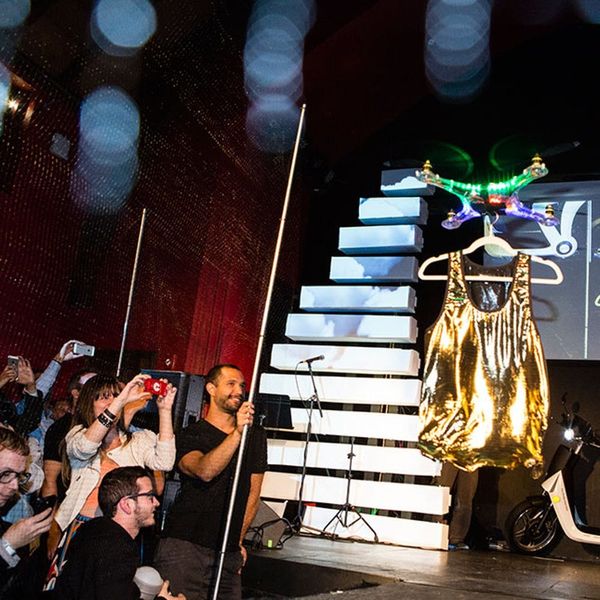 When it comes to fashion, Silicon Valley has a pretty terrible rap. Think: the Jobs black turtleneck, the Zuckerberg hoodie and jeans and maybe the most damning, those clunky smart frames that when worn out in public actually got you labeled a “Glasshole.” But last night, the tech mecca tried to change that with the first ever Silicon Valley Fashion Week?.

If the intentional question mark didn’t already give it away, the three-night tech-meets-fashion showcase dreamed up by Betabrand, an online clothing company that crowdsources and crowdfunds designs, doesn’t take itself too seriously — its website dubbed it “the wackiest show in town” and with drones, breakdancers, BMX riders and aerialists taking the place of traditional models on the runway last night, it definitely lived up to its promise.

“We are here to celebrate all the innovation that’s happening in our region. We’re here to explore ‘is there actual fashion in Silicon Valley?’” said MC Mustafa Kahn in Betabrand’s shimmering silver Disco Tux to a LOLing sold-out crowd at The Chapel in San Francisco. “There might be nerds, there might be geeks, but there is far more than that and, over the course of three nights, we’re going to be exploring that.”

Chris Lindland, the CEO and founder of Betabrand, stepped on stage to cut the inaugural ribbon and kick off night one, which centered around movemet and lighting. “When you look at fashion shows that I’ve seen in San Francisco, the people are awesome who put it on, but they’re often trying to make some carbon copy of what you see in New York or Milan or Paris. And while that’s great, it doesn’t capture the unique creative qualities that you see in the city of San Francisco that are spawned by things like Burning Man, the Maker Movement and the technology world,” he said. “The goal with this event from the get-go is to see how well we could do that. We wanted to give these people a runway and see what it looked like.”

Well, here’s a front-row view of what it looked like:

1. The night opened with a (disappointing) tech bro makeover: To set the irreverent mood, two style fairy godmothers descended upon a tech worker clad in his Silicon Valley uniform — a hoodie and jeans — singing “All you need is a little style” (amen). But the transformation fell flat when in its place he was given — ta-dah! — a head-scratching teal button up and a suit vest. How did Betabrand miss its moment to shine (literally) with its reversible Silver Disco Hoodie? To see a guy go from a boring black hoodie on one side to Vegas-level glitz with the flip of fabric, that’s a runway-worthy reveal.

2. The clothes glowed: Models hit the pitch-black stage in light-up gear that were worth the oohs: seeing the clothes in action made their techy aspects feel less gimmicky. SOVO’s Electric Hoodie flashed a neon halo over the person zipped up in it that would make any night runner or festival goer stand out in the dark, while Zackee’s blinking Turn Signal Gloves proved to be a clever way to help keep cyclists safer, especially when models were equipped with Torch’s LED-embedded helmets and Betabrand’s reflective bike to work gear, including a super cute pair of reflective ankle strap flats.

3. There were gadgets and gizmos aplenty: And they were all incredibly smart. The GenZe E-Bike and the Boosted Boards skateboards both boast enough power to climb SF’s most treacherous hills (not to mention help you get from point A to point B without breaking a sweat), while Tespack backpacks’ embedded solar panels use the sun’s rays to keep your haul fully charged — a bonus for commuters everywhere — and Misfit’s Swarovski Shine smart bracelets track your activity in the most glamorous way possible.

4. There were drone models: We’ll just let this video speak for itself.

5. And break dancers, BMX riders, aerial performers, cabaret singers and a sword dancer: Day one of Silicon Valley Fashion Week? was the spectacle it set out to be, but it also did hold its own as an innovation showcase. While the garments and gadgets featured on the runway didn’t have the style chops that make fashion girls swoon, they did embody the kind of entrepreneurial forward thinking the Valley is known for. And the minds behind the moment are just as invigorated and determined to spark change in the fashion field as any tech startup CEO. “Doesn’t it sicken you? Hoodies and jeans only! That’s what the rest of the world thinks we’re all about,” Chris Lindland said. “These next days are about us changing people’s ideas.” He motioned to the hoodie-clad castaways he had jokingly boo-ed off-stage. “I’m gonna challenge the models here. They’re gonna go backstage and do it up. They’re gonna put on new outfits with new ideas and show everybody maybe what we could dress like. Maybe the ideas that could change the way the rest of the world thinks about dressing themselves.”

Are you OMG-ing over the sights at Silicon Valley Fashion Week? Stay tuned as we cover the next two nights of the event!