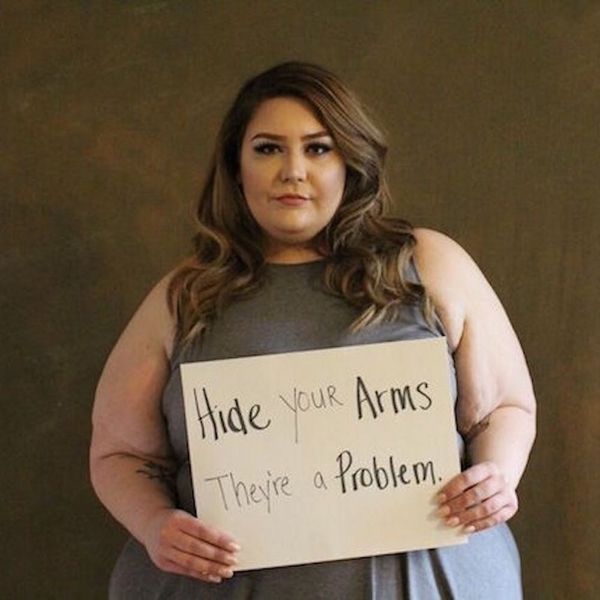 Open up any women’s magazine and count the number of times the word “flattering” is used — we bet it’ll hit double digits, at least. Our culture is obsessed with what’s flattering and what isn’t. We’re constantly trying to categorize our bodies — whether they’re pear shaped or apple shaped — and identify what kinds of clothes “flatter” that shape. Not very body positive, and it’s a close cousin to unhealthy body shaming. After all, what if you want to wear some super cute new trend, but those crazy, arbitrary rules say it doesn’t flatter you?

That’s exactly why fashion designer Mallorie Dunn started the #ImFlattered campaign. She’s the founder of Smart Glamour, a super body-positive brand of customizable clothing for all shapes and sizes. She’d been getting more and more fed up with the mainstream fashion industry’s insistence on flattery, so she decided to write a blog post about it. When that post got a lot of traction, she realized the world needed a larger movement to call attention to the ways the term “flattering” restricts how women are able to express themselves through style. Enter: #ImFlattered.

“Women’s negative self image is something that I’ve always been very passionate about. It’s my opinion that it stems from many things, but the two main culprits are women’s misrepresentation in the media (TV, ads, celebrity, movies, etc) and our struggle with shopping and fitting clothing to our bodies,” Mallorie tells us.

The campaign features badass women holding signs with comments they’ve gotten on their apparently unflattering sartorial choices, and Mallorie says the response has been a general sigh of relief.

“The responses have been 95 percent amazing!” she says. “Of course there will always be trolls on the Internet who are so unhappy with their lives that they can’t stand to see other people happy with themselves and go on the attack. But the majority of the responses have been women messaging me via SmartGlamour’s Facebook or sending emails or commenting on our original Facebook album and photos saying they resonated with a specific woman in the campaign or that they loved the idea in general.”

Through Smart Glamour, Mallorie has run a bunch of campaigns — including #AllBodiesAreGoodBodies, #SameSizeDifferentEyes and #MiracleMomBods. Her goal is to really make the company a safe haven for those of us fed up with downplaying our personal expression to fit society’s expectations.

“I’ve always loved fashion, and I’ve been making clothes for over 15 years now. But when I realized I could use that skill and create with it an environment where there is no women-to-women hate, no competition, a safe and empowering space, how could I not do it?” she says. “I have had women cry in my store over finally being able to shop with someone who cares. I’ve had women wear short sleeves for the first time in their lives, and I’ve had people tell me that shopping with SmartGlamour is like ‘being starving your whole life and finally seeing food.'”

Does this campaign change the way you think of the term “flattering”? Tweet us your thoughts at @BritandCo!

Kylie Kendall
Kylie is a freelance writer living in Ottawa, Canada. When she's not writing, you might find her scoping out all-day breakfast spots in her city or taste-testing every bottle of red wine under $10.
Body Positive
Style News
Body Positive Style Advice