Newsflash: Body Shaming Might Actually Be Making You Sick 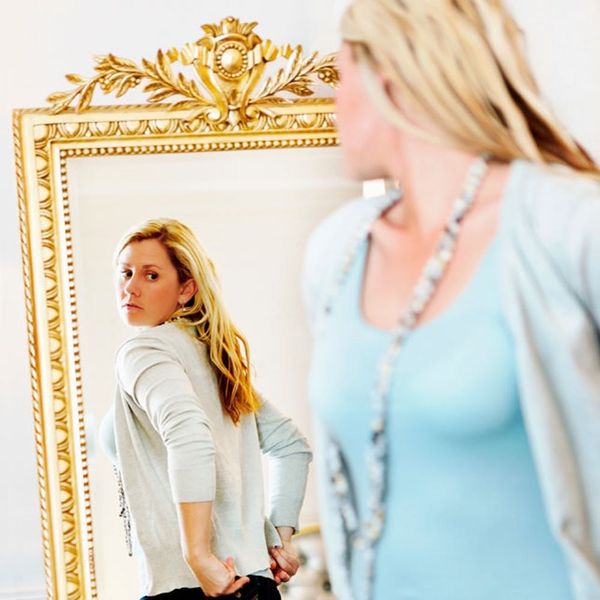 Remember that old rhyme about how sticks and stones can break your bones, but words can never hurt you? Well, think again. A recent study that looks at the relationship between body shaming and illness shows what some researchers have believed all along: When someone criticizes your appearance (or you do it yourself) it may literally make you sick. Since being body shamed sets women up for mental health issues like depression and eating disorders, Bucknell University researcher Jean Lamont suspected that body shame could also be a factor in poor physical health.

What We Think Affects How We Feel

Lamont performed two studies in which undergraduate women responded to statements like, “When I’m not the size I should be, I feel ashamed,” “I am confident that my body will let me know what is good for me” and “I often feel vulnerable to sickness.” Using that information, along with the subjects’ medical histories, Lamont affirmed that greater body shame aligned with poorer physical health. She repeated the study again, this time controlling for “self care” factors like smoking, body mass index and depression and took data twice across a semester.

“The results held,” she said, “and what that means is that body shame still led to poor health, no matter how much you weighed or how much you smoked.” But the story doesn’t end there. Though Lamont was specifically testing the correlation between body shame and poor personal health self-evaluation and responsiveness, she noted other ways body shame could be linked to poor health.

“For example, since chronic self-conscious emotions can suppress immunity, body shame could lead you to have a reduced ability to fight off a cold. And, since people who feel body shame tend to engage in poor health behaviors like disordered eating and smoking, self-care might also explain this relationship.”

Translation: When you feel bad about your body, you’re less inclined to take care good care of yourself, and that might make you more susceptible to getting sick. Yikes.

How to Stop the Shame Cycle

Lamont points out that body shame can take many forms. “It can occur when we feel like we don’t live up to what our culture thinks our bodies should be,” she explained in an email. That might mean shame stemming from what we think we should look like, or just the mere existence of normal body processes that society deems icky (like sweating or getting a period).

“Since many of those functions provide us with valuable information about our health, it makes sense that feeling ashamed of those things would lead to devaluing those bodily functions” — i.e. ignoring our own bodies and what we need — “and our health.”

The good news is that by clearly identifying the link between body shame and overall health, Lamont’s research offers some insight into how women can stop the cycle in its tracks by being more mindful of when they are engaging in self-harming behaviors. One of the takeaways from her findings is that simply being more conscious of what’s happening on your insides can really help. For example, Lamont shared, “We know that when people are trained in mindfulness meditation and yoga, they tend to become more attentive to and appreciative of things that go on inside their bodies.” So if you ever needed a good reason to get your ohm on, consider this a sign.

Even Supermodels Get Photoshopped

We could all learn to be a little kinder to ourselves and others about the skin we’re in, Lamont adds. “Women often blame themselves for not meeting the ideal,” Lamont explained, adding that, in reality, the “ideal” is impossible to meet. (Just a reminder: Even supermodels get photoshopped!) She encourages women to let themselves off the hook for not being what culture and the media deem beautiful. “Then again,” she added, “this shouldn’t be women’s responsibility to fix by ourselves. It would help if everyone called out these ideals for what they are.”

Some celebs who have been targets of body-shaming are heeding that call, including Amy Schumer, Lauren Conrad and Jennifer Lawrence, who told Barbara Walters, “I just think it should be illegal to call somebody fat on TV… The media needs to take responsibility for the effect that it has on our younger generation, on these girls who are watching these television shows, and picking up how to talk and how to be cool.”

As JLaw points out, avoiding the impact of body shaming culture — including not doing it to yourself — is often easier said than done. One way to help keep your mental (and physical) health in shape? Engage in activities that improve your self confidence and appreciate your body for what it allows you to do every day. That might mean hitting up yoga with your girlfriends and grabbing a healthy bite afterwards, or maybe putting on that dress that makes you feel gorgeous and twirling around in the mirror a few times. Making a conscious effort to stop the cycle of body shaming could be one of the best things you do for your health.

Have you experienced body shaming? Got any advice for us on conquering your inner critic? Tweet us @BritandCo and let us know!

Elizabeth Kiefer
Elizabeth Kiefer is a writer and editor who lives, works, and rearranges furniture in Brooklyn. When she's not typing away, she might be pickling carrots or potentially painting the cabinets (again).
Body Positive
Health
Body Positive Fitness Science