Your Favorite Starbucks Drink Might Contain 25 Spoonfuls of Sugar 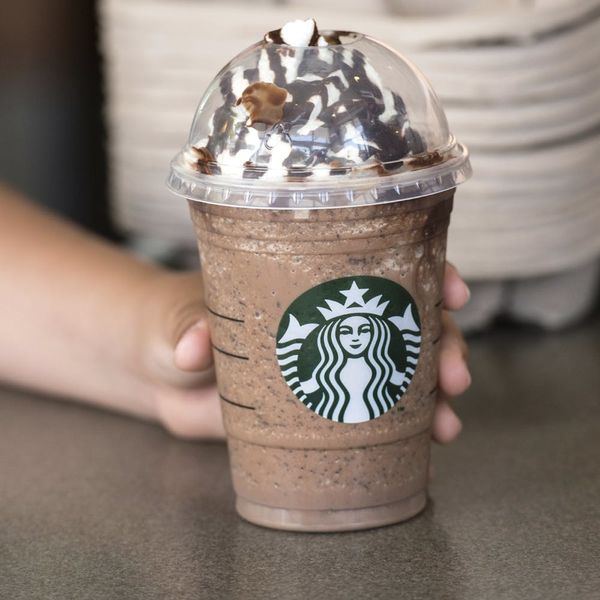 According to a new report by a British campaign group Action on Sugar, all those delicious flavored drinks from Starbucks — you know, the ones that are basically a cup of chocolate, with some caramel, chocolate sauce and whip cream and then like a spoonful of actual coffee — are a smidge worse for you than you may have thought. Actually, quite more than a smidge: the study found that your favorite Starbucks drinks can contain up to 25 teaspoons of sugar per serving. That much sugar would even make Willy Wonka pause. To give you some context the recommended daily dose of sugar for adults is six teaspoons, according to the World Health Organization.

The report said that 98 percent of hot flavored drinks sold at major coffee chains in the UK would receive a “red” (high) label for excessive levels of sugars per serving—with 35 percent containing the same amount or more sugar than a can of Coca-Cola. The research was conducted in the UK, but nutritional information published on the companies’ website show that sugar levels are similar in the US and elsewhere. The study looked at Starbucks, Pret A Manger and Costa.

As for the worst offenders, the report found that Starbucks’ Venti Chai Latte had 13 teaspoons of sugar in it. Vanilla lattes and caramel macchiatos also contain more than eight teaspoons of sugar each, according to the company’s US website. But the worst of the worst was the UK’s Venti Grape with Chai, Orange and Cinnamon Hot Mulled Fruit, which contained 99 grams of sugar or the equivalent of 25 teaspoons. Seriously, the Sugar Plum Fairy from The Nutcracker would have even thought that was too much for one drink.

While you might be saying to heck with it because you really want to try that new smoked butterscotch latte but remember health experts link excessive sugar intake to problems such as obesity, tooth decay and type two diabetes.

The coffee giant tells CNN it has committed to reduce added sugar in its “indulgent drinks” by 25 percent by the end of 2020.

Will you keep drinking Starbucks now that you know this? Tell us @britandco!

Meredith Lepore
Meredith is a freelance writer/editor who writes for Levo League, Bustle, Refinery 29, Instyle.com as well as magazines including Marie Claire, SELF, Women's Health and Cosmopolitan. Before going freelance she was Editor in Chief of the women's career site The Grindstone. She earned her Masters in Magazine, Newspaper and Online Journalism from the Newhouse School at Syracuse University. Meredith resides in New York full time and enjoys SoulCycle, jogging and playing with her Yorkshire Terrier Otis, who also loves SoulCycle.
Starbucks
Food News
Starbucks
The Conversation