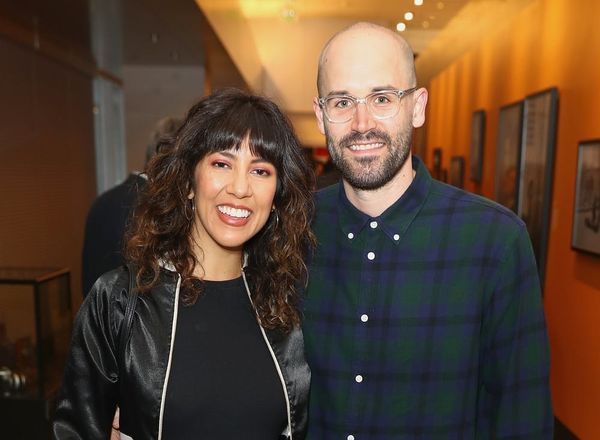 Stephanie Beatriz has said “I do!” The Brooklyn Nine-Nine star, who plays Rosa Diaz on the Fox-turned-NBC sitcom, married Brad Hoss on Saturday, October 6, in Los Angeles.

According to People, the couple tied the knot in front of nearly 300 friends and relatives, including Beatriz’s costars Chelsea Peretti, Andy Samberg, and Melissa Fumero.

Speaking with the mag ahead of the wedding, the actress said that she and her costars were excited to let loose at the reception. “That’s all we talked about this last week at work. We were just like, ‘Yeah, we can’t wait to party!'” she quipped.

“I think Andy’s excited to have another Hot Cheetos burrito. I think all of us are excited to dance. That’s one of our favorite things to do when we’re out all together, at a birthday party or whatever,” she continued. “Everybody loves to hit that dance floor. And not for nothing, all of them are pretty new parents. They deserve a night to just let loose and celebrate life, and I’m really, really excited that they’re all gonna be there to celebrate with me.”

Beatriz and her husband planned the big day themselves. “We decided that we wanted it to really reflect us,” she explained to People. “So for us that meant being involved every step of the way, meaning that we didn’t hire a wedding planner.”

The wedding’s theme was Los Angeles, where the newlyweds live. “We’re kind of doing a lot of theatrical recreations of our favorite stuff in LA,” she told the mag. “Like, the flora and fauna and how no matter the time of year something is blooming.” The reception also featured special LA-themed rooms and food trucks instead of buffets.

Peretti, who announced last week that she’s leaving Brooklyn Nine-Nine, took to Instagram on Sunday, October 7, to post a few photos from the special day, including one of the bride and groom standing together under a gorgeous floral display. Beatriz wore a lace gown from Grace Loves Lace, while Hoss opted for a light gray suit.

According to Us Weekly, the couple decided to forgo presents and instead ask guests to donate to one of their favorite charities, The Trevor Project, Lake Geauga Recovery Centers, The Grey Muzzle Organization, and the Eva Longoria Foundation.

Are you a fan of Brooklyn Nine-Nine? Let us know @BritandCo.

(photo via Joe Scarnici/Getty Images for Annenberg Space for Photography)