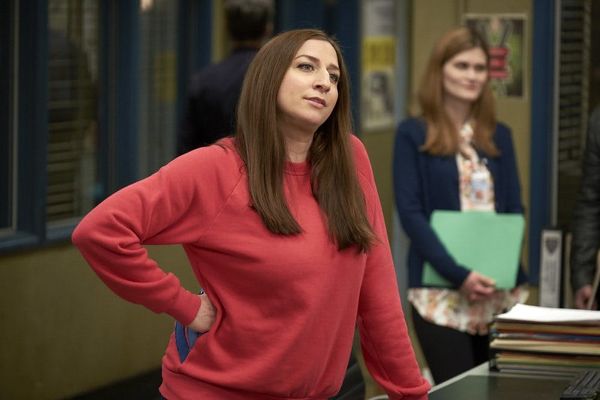 Sad news for Gina Linetti fans: Chelsea Peretti, the actress who plays the beloved sardonic administrator on Brooklyn Nine-Nine, announced Wednesday, October 3, that she will not appear for the entirety of the show’s upcoming sixth season.

“B99 fans. Hiiiiiiiiiiii. Chelsea Peretti, here,” she wrote on Twitter. “I won’t be doing a full season of Brooklyn Nine-Nine in Season 6. But that doesn’t mean I won’t ever be back, winky face emoji, heart emoji. I want to thank you for the hours you spent watching Gina be Gina: confident, idiotic-but-smart, pithy, and infused with rhythm and cell-phone radiation. It is hard for me to know exactly what to say.”

She then jokingly referenced Emmy Rossum’s recent departure from Shameless, bolding relevant quotes from Rossum’s statement. The selected portions included shouting out the cast and crew and a very vague and hilarious, “We have made over 100 hours of television.”

B99 fans. Hiiiiiiiiiiii. Chelsea Peretti, here. I won't be doing a full season of Brooklyn Nine Nine in Season 6. But that doesn’t mean I won’t ever be back, winky face emoji, heart emoji. I want to thank you for the hours you spent watching Gina be Gina:

Series co-creator Dan Goor also spoke out about Peretti’s exit on Twitter, saying that from the moment he and Mike Schur created the show, they wanted Peretti on board. “She has brought so much to her amazing, hilarious, unique portrayal of Gina Linetti, which is not surprising since she is one of the funniest people in history,” Goor tweeted. “We have tried really hard to create a storyline for her departure that lives up to a character who can only be described as ‘The human embodiment of the 100 emoji.’ While it’s sad to see a member of the family leave, we are so proud of Chelsea and excited for what she does next. Also, I know for a fact this isn’t the last we’ll see of Gina Linetti. I mean, she got run over by a frickin’ bus, and she only missed like a week of work.”

Peretti did not offer a reason for why she’s taking a step back in the show’s sixth season, but she’s been busy with other projects in recent months. Over the summer, she shot her first feature film starring role in a comedy called Spinster, and she’s currently filming Friendsgiving with Kat Dennings, Aisha Tyler, and more.

Brooklyn Nine-Nine almost didn’t get a sixth season. Last spring, Fox announced the comedy’s cancellation, but days later, NBC came to the rescue, renewing the show after a massive outpouring of support on social media.

Are you sad to hear Chelsea will be leaving Brooklyn Nine-Nine? Let us know @BritandCo.