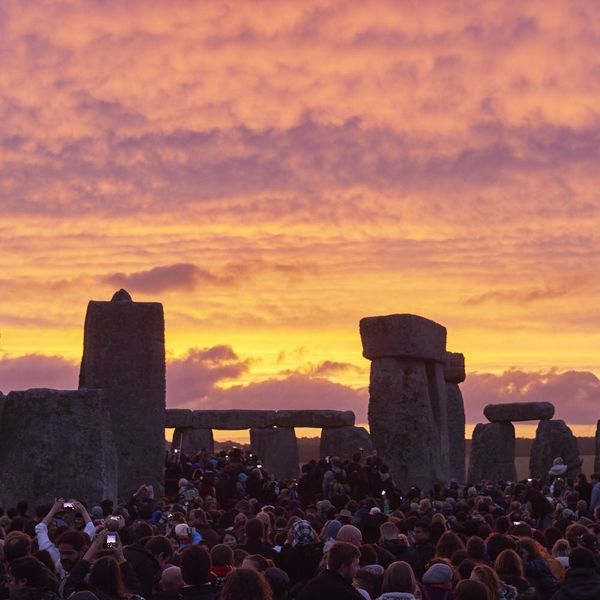 Summertime travel calls for outdoor adventures, colorful destinations, and quintessential European vacays. The warm weather isn’t the only reason why summer’s the most popular travel season. Many places in the world also have way more hours of daylight than usual, peaking on summer solstice — the longest day of the year — on June 20 this year. Whether you’re into chill music festivals, cool yoga retreats, or sailing on a dragon boat (yeah, you read that right), these 9 incredible summer solstice celebrations are the ultimate way to spend those extra hours. Trust us: You won’t regret it.
Secret Solstice Music Festival, Iceland: If you’re in a bit of a funk now that Coachella season is behind us, Iceland’s Secret Solstice Festival is the place for you. Although it’s no longer much of a secret, this music festival attracts people from all over the world for an unbeatable dance party. Music blasts 24 hours a day, and this year’s top headliners include the Foo Fighters, Rick Ross, and Big Sean. There are only three hours of darkness each night, so you're going to need plenty of caffeine. (Photo via Matthew Eisman/Redferns/Getty)
Solstice at Stonehenge, England: For a more spiritual retreat, think about spending summer solstice, celebrated as a day of rebirth in pagan and druid cultures, at Stonehenge, historically known as an important site for both ancient religions. That doesn't mean this celebration hasn't come into the digital age. The peak moment of the festival (to capture an Insta-worthy shot!) is at sunrise, when the orange and pink colors pour through the cracks in the stones. Who's down to commune with nature? (Photo via Niklas Halle'n/AFP/Getty)
Midsummer, Sweden: Flower crowns, dancing, and drinking galore, midsummer is one of the most well-known summer solstice celebrations around the world. Swedes and tourists alike count down the days to Midsummer's Eve, so much so, that it became its own national holiday. If you're rolling to this countryside event, get ready to frog jump around the maypole like there’s no tomorrow. Party on, Swedes, party on. (Photo via Getty)
Summer Solstice Parade, Santa Barbara, California: Over 100,000 people come together every year to celebrate the longest day of the year in the coastal town of Santa Barbara. Parade floats, live DJ’s, elaborate costumes, and craft beer are just a few of the awesome things you should expect to see at this party. It’s also the largest arts event in Santa Barbara county, embracing the whimsical and creative nature of the town. (Photo via Visions of America/UIG/Getty)
Dragon Boat Festival, China: For the Game of Thrones-obsessed partier, China's three-day Dragon Boat Festival should be number one on your list. The festivities date back 2,000 years and still draw huge crowds every single year. The festival falls on the fifth day of the fifth month of the traditional Chinese calendar. From boat races to an unlimited supply of rice dumplings, there’s no shortage of food and fun. Pro tip: Show up with an empty stomach because you’ll want to try absolutely everything the food trucks and street markets have to offer. (Photo via VCG/Getty)
White Nights Festival, St. Petersburg, Russia: The White Nights Festival is a month-long event centered around the midnight sun, which occurs in super northern or southern places in the world. A midnight sun means the sun is always slightly visible on the horizon, so it doesn't ever get totally dark. Pretty amazing. With classical ballets, operas, and other music events, the cultured crowd shines during the celebration. Fancy people, this one's for you. The most popular event to attend is the water show, with sailboats and fireworks that light up the twilight sky. (Photo via Sergey Mihailicenko/Anadolu Agency/Getty)
Solstice in Times Square, New York: Calling all yogis: Book your flights to NYC right now. In celebration of the summer solstice and International Yoga Day, both on June 20, thousands of people shut down Times Square for a free yoga class known as the Mind Over Madness event. From sunrise to sunset, you can participate in one of the biggest yoga classes you’ve ever taken in your life. Talk about bringing people together. (Photo via Erik McGregor/Pacific Press/LightRocket/Getty)
Astrofest, Croatia: Star-lovers, we’ve found the ultimate destination for you. Astrofest — part astronomy festival — is one of the most unusual blowouts we've heard of to date. With star gazing, musical performances, dancing, and bonfires, myth has it that this two-night festival brings fairies and elves together with the sun and moon. Basically, our bags are already packed. (Photo via Getty)
Mountain Bonfires, Tyrol, Austria: Austria is the perfect summer solstice destination for outdoorsy folks. In the towns surrounding the Austrian Alps, locals and tourists alike gather together to create a big bonfire to illuminate the entire night sky. We're going to channel our inner Julie Andrews and twirl and sing the super short night away. (Photo via Getty)

What summer solstice festival are you most excited for? Tweet us @BritandCo!