12 Supernatural Shows to Turn Your World Upside Down in 2018 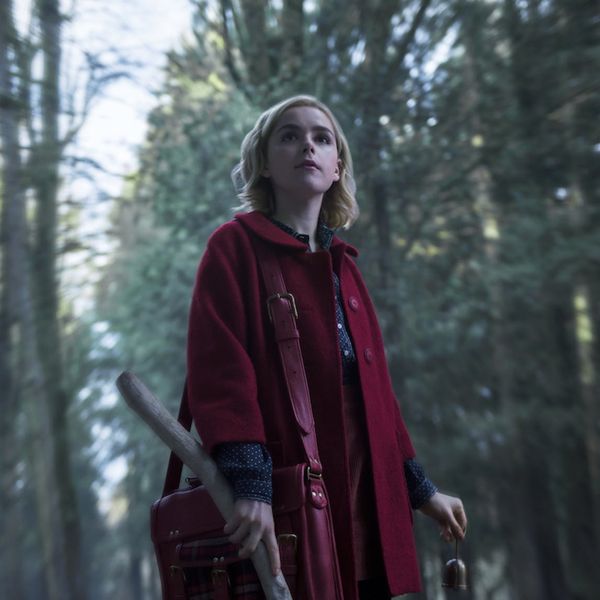 We love shows that take us to other worlds, even if just for 30 minutes. And supernatural elements — like time-travel or vampires or witches — add an extra level of escapism. Click through to see 12 shows from 2018 that will turn your reality upside down. (Photos via Patrick Harbron/Hulu + Jordon Nuttall/The CW + Giles Keyte/BBC America + Diyah Pera/Netflix)
Castle Rock (Hulu): Stephen King fans, this is the show for you. The series, which premiered on Hulu in July, features a collection of characters and settings from King's chilling horror novels, but in an entirely new story. The vibe is very Stranger Things, but for an older audience. André Holland, Melanie Lynskey, Bill Skarsgård, Jane Levy, and Sissy Spacek all star. (Photo via Patrick Harbron/Hulu)
iZombie (The CW): Rose McIver takes the lead in iZombie as Olivia "Liv" Moore, a medical examiner who just happens to be a zombie. She solves murders by eating the brains of the victims, which allows her to take on the personalities and memories of the people whose deaths she's investigating. Malcolm Goodwin plays her Seattle PD partner, while Rahul Kohli shines as her boss in the ME's office. Season 4 aired in early 2018, and season 5 — the show's last — will debut in early 2019 on The CW. (Photo via Jordon Nuttall/The CW)
The Innocents (Netflix): A new series from Netflix, The Innocents is a haunting tale of teen romance that focuses on a young couple, June and Harry, who run away when their families try to keep them apart. They quickly find themselves caught up in a dangerous new world when June begins to display mysterious shapeshifting abilities. Season 1 premieres in September. (Photo via Aimee Spinks/Netflix)
The Originals (The CW): The Originals, a spinoff of The Vampire Diaries, wrapped for good in early August, but you can catch up on all five seasons via Netflix. The show revolves around vampire-werewolf hybrid Klaus Mikaelson (Joseph Morgan) and his siblings Elijah (Daniel Gillies) and Rebekah (Claire Holt), who are members of the original family of vampires. (Hence the name of the series.) (Photo via Jordon Nuttall/The CW)
Legacies (The CW): Fans who have already watched and rewatched all five seasons of The Originals can tune in to its spinoff, Legacies, in October. The series will follow Hope Mikaelson, the "tribid" daughter of Klaus Mikaelson and Hayley Marshall, as she learns to wield her supernatural powers at the Salvatore School for the Young and Gifted, which was named for the Salvatore brothers from The Vampire Diaries. (Photo via Quantrell Colbert/The CW)
The Magicians (Syfy): If you've ever dreamed of going to school to study magic (and most of us have, thanks to Hogwarts), you'll definitely want to check out The Magicians. Jason Ralph plays Quentin Coldwater, a student at Brakebills University for Magical Pedagogy, a secretive academy where students learn that spells, potions, and special powers are not only real, but more dangerous than you could ever imagine. Season 3 wrapped in April, and season 4 is due in 2019. (Photo via Jason Bell/Syfy)
Doctor Who (BBC America): Jodie Whittaker, the first female doctor on Doctor Who, will make her official debut when series 11 premieres in October. The "Doctor," for uninitiated viewers, is a time lord who travels through space and time to help people in need. (Photo via Giles Keyte/BBC America)
Outlander (Starz): Like Doctor Who, Outlander involves time-travel. The show, which will premiere its fourth season in November, is based on the historical novels by Diana Gabaldon and revolves around Claire Randall (Caitriona Balfe), a WWII-era nurse who travels back in time to Scotland in the 1700s, where she meets and falls in love with Jamie Fraser (Sam Heughan). Let's be honest: Who wouldn't fall in love with Sam Heughan? (Photo via Starz)
Supernatural (The CW): Jared Padalecki and Jensen Ackles play Sam and Dean Winchester, brothers who team up to hunt demons and other supernatural predators, in The CW's longest-running current show, which has been scaring fans (much to their delight) since 2005. Season 14 will premiere in October. (Photo via Dean Buscher/The CW)
Charmed (The CW): Original Charmed stars Shannen Doherty and Holly Marie Combs aren't exactly thrilled about the reboot of their beloved supernatural series, but fans will be able to judge the show for themselves when it premieres in mid-October. If you're intrigued by the idea of a trio of powerful sisters who use magic to protect themselves and others from dark forces, give the new series a shot, or track down the original on Hulu. (Photo via Jordon Nuttall/The CW)
The Chilling Adventures of Sabrina (Netflix): Kiernan Shipka is taking on the role of Sabrina Spellman for this spooky new series, which is set to make its debut just in time for Halloween. Melissa Joan Hart played a version of the Archie Comics character in the '90s series Sabrina, the Teenage Witch, but Shipka's Sabrina will have much darker forces to deal with, starting with someone named Madam Satan. (Photo via Diyah Pera/Netflix)
Midnight, Texas (NBC): Season 2 of Midnight, Texas — a show that features all kinds of supernatural beings, including a vampire, a half-demon, a fallen angel, a weretiger, and a witch — will premiere on NBC in October. The series is based on Charlaine Harris' books of the same. (Photo via Virginia Sherwood/NBC)