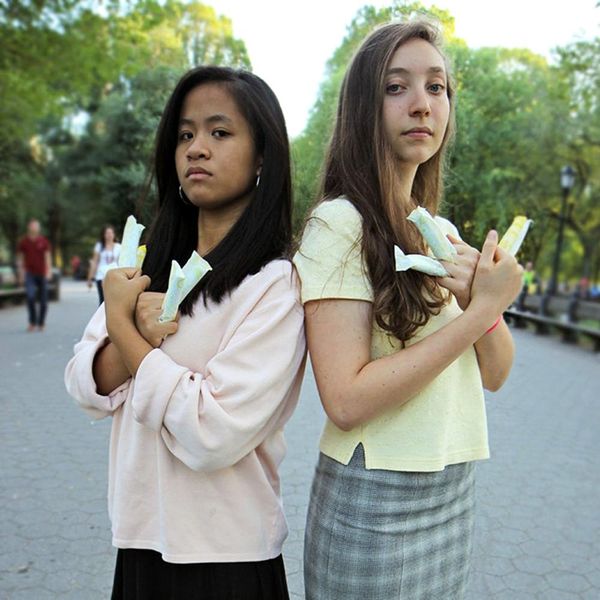 There is an exciting update in the world of menstruation gaming. The same teenage girls — I repeat, teenage girls aka the original girlbosses aka damn, I need to get on my resolution to learn how to code asap, amirite?! — who brought us Tampon Run back in the fall are launching a mobile version of their addictive viral video game. Coming to an iOS device today, you can take Tampon Run on the run now for free.

Since we last chatted with Sophie Houser and Andy Gonzales, the two Girls Who Code graduates who launched the game meant to change the way we approach periods have taken their creation to the next level. They worked with Pivotal Labs to turn their 8-bit web game into a mobile iOS app and added new challenges, an all-new enemy, a leaderboard to get all competitive with your buds and even original music. Is “Sorry, I had to QA the most recent version of my app in Test Flight before it launches,” the new “my dog ate my homework,” for kids these days?

In the mobile version, our superhero Luna (gosh, these gals are clever) needs your help to “rid the world of menstruation haters” and open the mind of “period shamers.” She’s bringing out the big guns to complete her mission — enlightenment and tampons. The latter, which she shoots at her opponents as she hustles through the mean menstruation-panicked streets of the pixelated metropolis she resides in.

The mission of Sophie and Andy parallels little Luna’s and takes it a step farther. Not only are they trying to torpedo a proverbial tampon through our society’s taboos surrounding menstruation, but they’re also encouraging other young girls and women to code, join them in their STEAM studies and shatter tech’s glass ceiling for their + future generations. With an app, they hope to reach an even wider audience of smartphone-toting badasses-in-training. Candy Crush, who.

Since September, this role model-worthy twosome have been keeping busier with things you probably didn’t even know existed when you were in high school. They’ve given a TEDx Talk, created a new female-themed game during a Silicon Valley hackathon (where they were also finalists in the competition, btw) and started developing a book concept around Tampon Run. To say we can’t wait to see what’s next is an understatement — to say Houser and Gonzales for Co-Presidents 2040 sounds about right.

Did you DL Tampon Run? Tip us off to more Girls Who Code graduates like Sophie and Andy below!

Lisa Raphael
In her past professional lives, Lisa has served the masses as the Editorial Director at Brit + Co, Bieber Whisperer at J-14, Golden Girls Fan Club Prez at Lifetime and Talk Show Host Understudy to Katie Couric. Now, she's taking on the sports world at The Relish, teaching Hairography 101 in her spare time and will forever be trying to fill the hole Zayn Malik left in her heart.
Coding
Health
Coding STEM Womens Health
More From Health