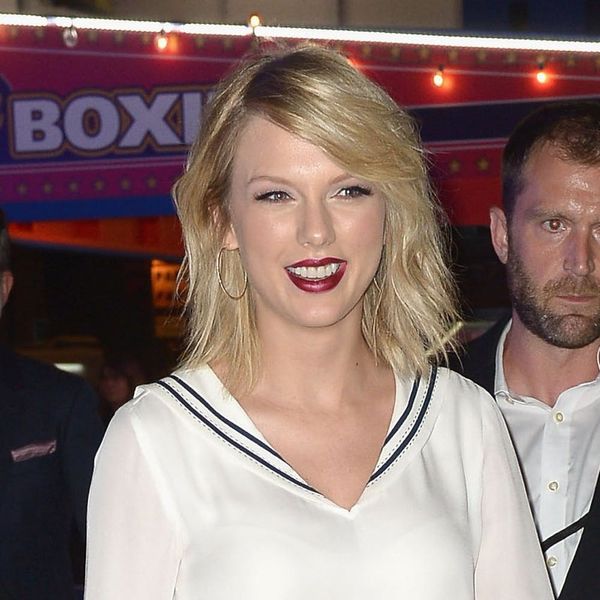 Taylor Swift’s massive court win last week was not only a victory for the 27-year-old pop star — it was a win for women everywhere. The “I Don’t Wanna Live Forever” singer was cleared of all charges brought against her by former radio DJ David Mueller, who slapped her with a $3.4 million defamation lawsuit after Swift claimed the radio jockey sexually assaulted her. She was also victorious in her countersuit against Mueller, in which she requested a symbolic amount of $1 to show survivors everywhere that you CAN stand up to your aggressors — and defeat them.

In case you had any doubt about just how truly important that message was, RAINN (Rape, Abuse, & Incest National Network), which is billed as the world’s largest anti-sexual abuse organization, had some pretty staggering stats to report in the wake of Swift’s case. The organization told ABC News that its hotline saw a 35 percent increase in use from Friday to Monday — the timeframe from when the activist saw her charges dropped to the time the judge ruled in favor of her countersuit.

While Swift is in an undoubtedly privileged position, with plenty of means for top-notch attorneys and love and support flooding in from fans all over the world, injustices can never be righted if they’re not even reported, which is, in fact, one of the largest obstacles when it comes to sexual assault cases, according to organization president, Scott Berkowitz.

Currently, only 344 out of every 1,000 sex crimes are reported to the police, with victims citing retaliation, fear of not being taken seriously, or belief that a crime of such nature was a “personal matter” as their rationale. For those doing the math, that means two out of every three sexual assaults go unreported. Of those reported cases, 994 perpetrators will walk free for every 1,000 cases reported. Needless to say, the outlook isn’t great.

But having someone like Swift shine a spotlight on such an issue, and doing so without shame or fear, could have a major impact on those who would let their perpetrators walk away from their crimes. “[It’s] a great demonstration to other victims that there is strength in coming forward and pursuing justice,” Berkowitz said. “Seeing someone that they respect, that they identify with [state that they’ve been assaulted] has a big impact,” he told the outlet. “I think that will encourage others to come forward.”

He doesn’t see her influence being a passing fad, either. “I think this could have a long-term impact and help shape the conversation. While the circumstances of assault are different (some wrongfully trivialized the ordeal, as Mueller was accused of groping Swift’s rear as opposed to more serious allegations), [Swift] can still serve as a symbol for sexual assault — that you don’t have to take it.”

The majority of sexual assaults are not reported to the police. #MyNameOurVoice

It certainly appears to have had a heavy impact on the singer herself. Following her legal victory, Swift released a statement promising to help those who have been victims of similar abuse.

“I acknowledge the privilege that I benefit from in life, society, and in my ability to shoulder the enormous cost of defending myself in a trial like this,” she said. “My hope is to help those whose voices should also be heard. Therefore, I will be making donations in the near future to multiple organizations that help sexual assault victims defend themselves.”

The Huffington Post reports that she’s doing just that, having already reached out to Joyful Heart, a sexual assault support foundation headed by Law and Order: SVU star and fellow survivor, Mariska Hartigay.

What did Taylor Swift’s public hearing mean to you? Share with us @BritandCo.

Nicole Briese
Nicole is the weekend editor for Brit + Co who loves bringing you all the latest buzz. When she's not busy typing away into the wee hours, you can usually find her canoodling with her fur babies, rooting around in a bookstore, or rocking out at a concert of some sort (Guns N' Roses forever!). Check out all her latest musings and past work at nicolebjean.com.
Taylor Swift
Current Events
Taylor Swift
More From Current Events