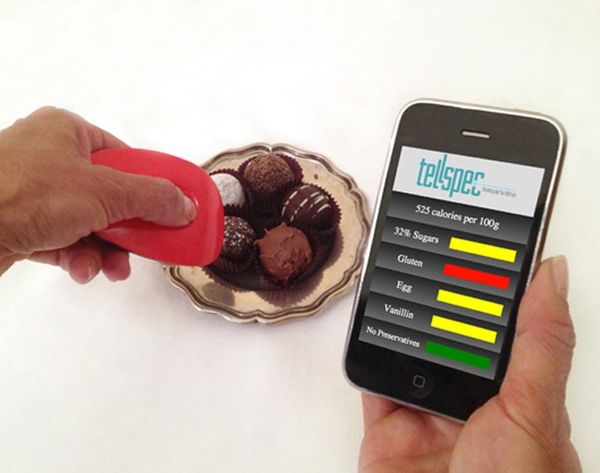 What if you could wave a magic wand over your food and seconds later know exactly what was in it? We know it sounds like straight up sorcery, but this revolutionary technology actually exists.

TellSpec is a gadget that detects the allergens, chemicals, nutrients, calories, and ingredients in anything you eat or drink. Just wave the hand-held device back and forth over your cheeseburger or glass of wine until it beeps, then check your phone to see the results.

TellSpec not only tells you if what you’re about to eat contains the nutrients your body needs, but it also helps you avoid accidentally consuming anything you shouldn’t. It’s like a dream come true for people with food allergies.

But this device isn’t just useful, say, if you’re gluten-intolerant: TellSpec is a handy aid for anyone who’s a health-conscious eater or prides high-quality food. Want to see if the apple you just bought has pesticides in it? Or know if there are trans fats lurking in your take out? Now you can literally have this nutritional information in the palm of your hand.

There’s an in-depth, scientific explanation for how TellSpec works (check out their indiegogo campaign to get the full-blown low-down), but basically it’s a three-part system comprised of a spectrometer scanner, an algorithm, and an app on your phone. When you scan food or drinks, a laser beam changes the energy levels of some of its molecules and records that reaction. That data is analyzed by the algorithm, then beamed to your phone in the form of well-sorted results: ingredients—including allergens—chemicals, and nutrients are categorized by a green-yellow-red color system that seem to designate the good, the bad, and the ugly.

It seems like only thing that TellSpec can’t tell you is which farm your organic chicken came from. The device counts calories, monitors your intake of chemicals, vitamins, and minerals, and even detects ingredients inaccurately reported (or not reported at all) on food labels. TellSpec can also help you identify food sensitivities based on your post-meal feedback.

The team behind TellSpec have successfully tested prototypes and are moving toward production with the help of crowdsourcing, which has proved to be a successful route: TellSpec will more than likely surpass its $100,000 goal well before its deadline. You can grab this all-knowing gadget for $150, which seems like a small price to pay to be such a highly-informed eater.

Would you zap your grub with TellSpec? Do you use any other high-tech ways to keep track of what you eat? Talk to us in the comments below!