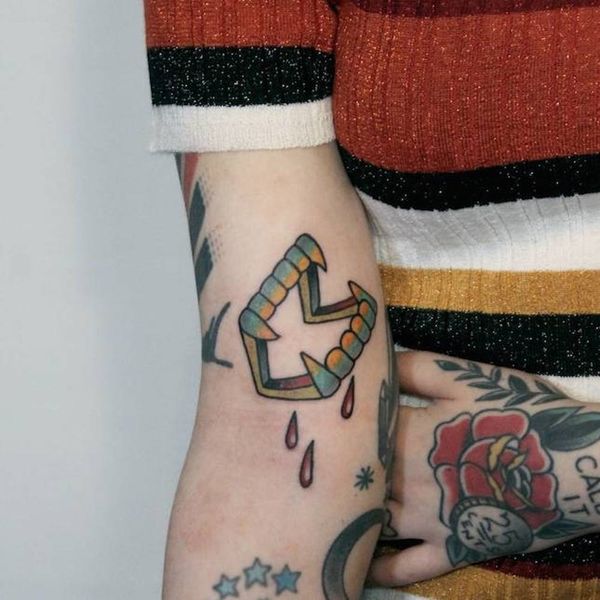 If your love for Halloween extends well beyond one day, it may be worth considering something a little more… permanent ;) To help inspire your next bit of ink, we found some of the cutest spooky Halloween tattoos on Instagram. These zombies, vampires and other spooky creatures of the night have been given an unexpectedly cute twist. But hey, no one’s complaining. Scroll down for 15 super cute and spooky Halloween tattoos you’ll definitely choose over candy.

1. Jack-o’-Lantern: Celebrate your favorite holiday with a classic jack-o’-lantern. Frame it with a couple of bats and an oozing slime-covered heart and you will have done Halloween justice.

2. Vampire Fangs: They may be blood-suckers, but you can’t deny vampires are the classiest creepy characters in the realm of monsters. Get this stylish set of ombre chompers if you agree.

3. Hocus Pocus Spell Book: Your childhood would not be the same without having watched Hocus Pocus every Halloween. Rep some pride for the Sanderson sisters with a tattoo of their most beloved spell book.

4. Haunted House: You really *can’t* go wrong with a haunted house tattoo. A timeless motif in scary books and films, the classic haunted house motif is one that’ll continue to endure, even as a tattoo.

When your two clients cancel for the day and your colleagues clients friend puts her hand up to fill in some time! Thanks so much @tifff666!!! I had soooo much fun with this and would love to do more. Thanks for looking! #skeleton #skeletonhandtattoo #skeletonhand #newschooltattoo #scarytattoo #halloweentattoo #halloween #halloweenflashsheet #tattoo #tattoosmash

5. Skeleton Hand: Regardless of whether you want to symbolize good luck or peace, a hand gesture is 10 times cooler in skeletal form. Add splotches of bright color to channel this bold look with added dimension.

7. Poison Apple: Snow White may have been the creepiest Disney Princess film yet, TBH. It’s amazing we turned out okay after watching a movie about an evil queen, a haunted forest *and* poison apples.

8. Sugar Skull: Who knew something so creepy could look this beautiful? Get a full-on Day of the Dead tattoo — complete with all the bells and whistles a traditional sugar skull design requires.

9. Adventure Time Zombies: This is *the* tattoo to get if you adore both Adventure Time and Halloween. Just give Finn and Jake a zombie makeover for a similarly spooky look.

10. Zero: If you love The Nightmare Before Christmas but want something other than a Jack Skellington tattoo, go with Jack’s ghost dog Zero. He’s just as endearing with his li’l glowing pumpkin nose.

11. Frankenstein Galaxy: He may not say much, but there’s a lot going on inside! Just take a look at this dazzling galaxy x Frankenstein design. *WOW*

12. Sally Finklestein: Jack and Sally have earned their place among the greatest scary movie couples. So share your love for Halloween *and* the S.O with a matching couples tattoos inspired by The Nightmare Before Christmas.

13. Frankenstein and His Bride: Maybe you haven’t found someone that looks at you like Frankenstein looks at his bride, but until then, get this tat to keep you company. It may be creepy, but you can’t deny their connection is relationship #goals.

14. Marceline Cupcake: If you didn’t think Adventure Time characters could get any cuter, think again. Here’s what Marceline the Vampire Queen would look like if she became a baked dessert. Seriously, SO cute!

15. Jack-o’-Lantern in a Graveyard: There are few places scarier than a graveyard at night. Pay tribute to one of the creepiest places you know with an inspired graveyard scene.

Grace Lee
Grace is an LA-based freelance writer, documenting her everyday life via her Instagram. She's a fan of spontaneity, individual style, all things Harry Potter, cuddling with her two dogs, and exploring new places. More about Grace can be found on her blog, Girl Meets World.
Halloween
Trends and Inspo
Halloween Instagram Roundup Tattoos
More From Trends and Inspo