The Bachelorette Recap: What Even IS an Engagement? 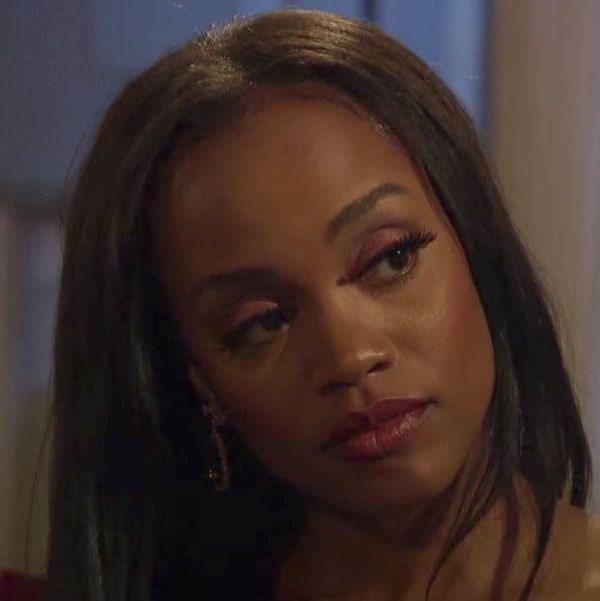 We’re swiftly approaching the end of The Bachelorette, and with Rachel’s certain engagement looming, I’m very stressed out about how this show insists on a strict timeline of love and engagement. Yes, the show has always been this way, but is there any room for an expanded definition of love and dating as the show also tiptoes around more troubling implications? Why does endlessly charming Rachel Lindsay have to go all-or-nothing with one of these dudes, including one who everyone thinks is the worst? I’m going to need a case of wine, 10 fidget spinners, and shock therapy to get through these last few episodes.

Rachel brings the guys to Dallas to meet her family. Her sister is eight months pregnant and can’t travel, but boy can she and her mother put these guys through the ringer and I LOVE IT. Where Rachel appears to have shed her skepticism, Constance and Kathy are deeply skeptical about the whole process. “We’re in love and ready to get married after nine weeks,” will not fly with these ladies, and this is very good news for Peter. My gap-toothed favorite has been painted as more and more unlikely to go all the way with Rachel because of his reservations about getting engaged. After a pleasant visit with the family, Peter tells Kathy that he is not ready to ask permission to marry her.

Oh, yeah. Part of this process is that the guys are expected to ask permission to propose to Rachel at the end of this, even though this is her show and she has all the control. Normally, it would be the guys asking her father, but Judge Lindsay is too busy banging his gavel in the name of justice for all to engage in this bizarre patriarchal practice. So, if we have to do this crap, at least they’re asking her mother, I guess? But Kathy’s not entirely here for it and responds well to Peter saying he’s not ready to propose. She just wants to make sure that Peter takes a relationship with her seriously. He agrees. She agrees. I AGREE. End this charade now and really get to know Peter, Rachel!

Of course, that doesn’t fit with the structure of the show, so Rachel must offer two more lambs up for slaughter. Next up is Eric, who gets a little light grilling from Constance about having never been in love before. With his walls down, Eric expresses that he is ready for commitment and his sweetness wins over the family. There’s no way Eric wins this but he’s clearly a prime candidate to be the first black Bachelor, right?

Things don’t go so well for slick Bryan, and I am living for it even as Rachel’s family annoys her with their critical approach to her relationship with the smooth-talking Colombian chiropractor. He tells the whole family that he is in love with Rachel and thought of her as his girlfriend from the first date. Constance and Kathy don’t quite let loose the “HELL NO!” that they’re feeling, but they’re not about to let him get away with it. Bryan asks to be excused when things start to get tense and Rachel lets her family know she’s displeased.

“You are in a bubble,” her mother says. “We are outside that bubble. We need to get clarity.” LAY IT DOWN, KATHY. She won’t let Rachel’s googly eyes take this further than it needs to go. “I love your family,” Bryan tells Constance later. “It’s only been an hour-and-a-half!” she replies. TEAR HIM APART, CONSTANCE.

In the end, neither of these women feel the need to stand in the way of Rachel’s happiness, even as Bryan spews garbage like, “She has everything I’ve ever wanted in a potential future wife,” but their concern speaks volumes. “If you don’t have issues with each other, someone’s not being honest with the other,” says Kathy, laying down one final bit wisdom. The only way I could adore these women more is if they bound and gagged Bryan and returned him to Miami to live out the rest of his days as mama’s special guy.

With the bros thoroughly vetted, it’s off to Spain, where Rachel is ready to be engaged for the first time! Really, how did we get to this point with the self-professed skeptic? Is she contractually obligated to need to be engaged at the end of this? She takes a romantic helicopter ride with Eric, who is more happy-go-lucky than ever. She’s concerned that Eric has never been in love before, and it’s clear that this is hobbling him as far as the show’s accelerated romance schedule is concerned. He wants to be able to tell her that he loves her but his guard is up.

Then, there’s an exchange between Rachel and Eric that rivals any major courtroom drama. He felt a connection when they were in the hot tub! What kind of connection? Emotional! WHAT KIND OF EMOTION?!? He loves that she challenges him but she makes it clear that it is down to the wire. Finally, he tells her he’s in love with her. He’s tried to run but he can’t run from it anymore. She rewards his openness with an invitation to have sex with her in her suite. At least the show is designed to let them test drive before buying the car.

Next up, Rachel and Peter go to a date at a winery. Peter tells Rachel that he told her mother he couldn’t ask for her permission to get engaged, but rather that he wants to continue dating her. Their conversation is interrupted by a small child beckoning them to stomp on grapes, because Spain, am I right? With the tough stuff on hold, they make wine while making out and it’s clear that these crazy kids are smitten and falling fast.

But is it fast enough? They resume their conversation and it becomes quickly clear that they have differing opinions about what it means to be engaged. For Peter, engagement means marriage for sure while Rachel takes an engagement to mean a commitment to eventually getting to a point where they can and will get married and wait, wait, wait, hold up. Rachel, how did you pass the bar? Where is the airtight logic that comes with being a lawyer?

“For me, a proposal isn’t, ‘Oh my god, you’re getting down on one knee and you’re proposing and we’re getting married tomorrow, next week, next month, next year,'” she says. Is there a head-exploding emoji? There’s certainly a crying emoji 😭 because Rachel ends up in tears as “To Be Continued…” (oh, see, I thought the whole show ended here) flashes on the screen.

Eric: Rachel doesn’t have the chemistry with Eric that she has with Bryan or Peter, and he’s a long-shot for taking this whole thing, but his successful family visit and one-on-one puts him at the top for the time being.

Peter: With this episode and the ads for the final episode, Peter seems poised to end this journey alone, but this could all be a hoodwink leading to his eventual triumph. Fingers crossed.