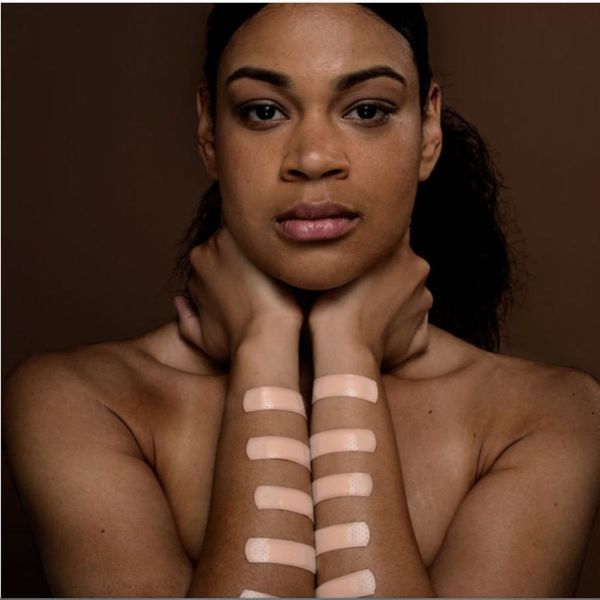 What “nude” looks like to you depends pretty heavily on what you look like nude. We’re talking about the idea of nude as a color here, not the state of clotheslessness (okay, not an actual word, we know, but it totally should be).

Too often, the way companies and the marketers they use to sell their products define “nude” is incredibly limited — imagine a shade that fluctuates wildly (insert eye roll here) between a pinky beige and a warm, off-white.

Finding beauty products like foundation to match non-beige or cream-colored skin tones has been a widely acknowledged struggle for a long time, but there’s a much broader selection of products that are also problematic. Think: high heels, lipstick, nylons, underwear, bras, Spanx, nail polish, dancewear like leotards, tutus, and Pointe shoes, band-aids, and crayons and other art supplies.

We’re Nude Against Nude and we’re trying to change what color brands label nude. Brands across the board, from pharmaceutical companies, to fashion houses uses nude when they mean white-colored nude. It’s this kind of latent colorism that we’re trying to stop. #NudeAgainstNude --------- Photographer: Anrong Xu Makeup Artist: Gary Wong

The fact that these items don’t exist in a wider range of skin tones, one that actually represents the diversity of people across the US, is only a fraction of the issue. Another aspect is that the limited number of colors that DO exist are named, labeled, and generally referred to as “nude,” warping what that word actually means, and excluding people whose skin is not a whiter shade of pale (no offense, Annie Lennox).

That kind of casual, ingrained racism — the kind we don’t notice until or unless it directly affects us (or a someone alerts our attention to it) — is what the team behind a campaign called Nude Against Nude is trying to address through a series of striking photos that spotlight the issue.

“Some brands describe products as ‘nude’ when what they really mean is cream or beige,” explains the campaign’s website. “This widespread usage of ‘nude,’ interchangeably with beige, is another instance of casual racism. This is because as a society where white privilege prevails, white is the standard skin tone and non-white skin is other. This idea that ‘nude’ is one color results in an astounding range of products which make no attempt at inclusivity.”

Spreading the word on the streets of NYC. #NudeAgainstNude

Besides postering New York City with their photographs and launching a seriously gorgeous Instagram page, organizers behind the campaign are targeting specific brands with a petition to change their language to reflect color instead of concept. The aim is to get companies that “treat ‘nude’ as a color that matches only white skin, neglecting millions of others” to call their products ‘beige’ or ‘cream’ — an implicit acknowledgment that they’re (at the very least) aware that other skin tones exist. It’s a small step towards inclusivity, but that doesn’t mean it isn’t an important one.

Is it a struggle to find products that are a match for your skin tone? Let’s talk about it on Twitter!

(Images via Nude Against Nude)

Corrina Allen
Corrina Allen is a film + television + travel writer from Toronto. Her journalistic goals include a backstage interview with David Byrne, the fictional character she identifies most closely with is John Wick, and her favorite dead person is Vladimir Nabokov. She never, ever Instagrams photos of her food (just her dog).
Every Body
Diversity
Every Body inclusivity