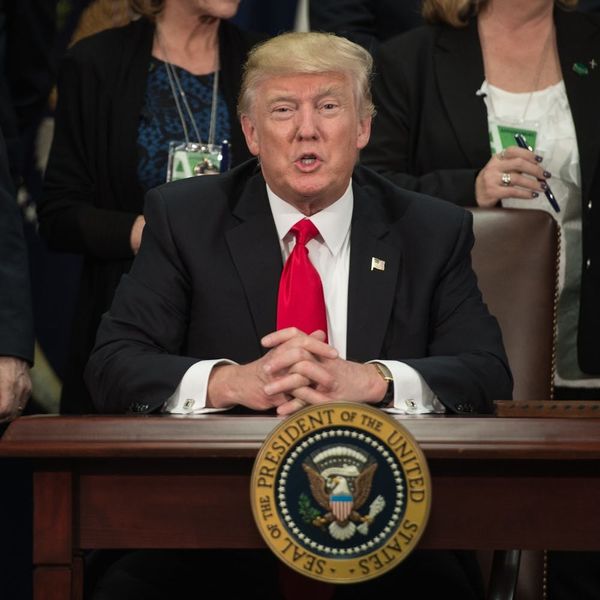 While we continue to keep an eye on the sitch in Washington — e.g. changes like the anti-abortion bill that was just passed and the next marches that you can expect — folks are making their voices heard when it comes to what they want to see from the new president. Case in point? Though his administration has maintained its stance that folks are no longer interested in the issue, the petition to get President Trump to release his taxes actually just broke a White House record.

“The White House response is that he’s not going to release his tax returns,” Trump’s advisor Kellyanne Conway said while appearing on ABC’s This Week. “We litigated this all through the election. People didn’t care. They voted for him, and let me make this very clear: Most Americans are — are very focused on what their tax returns will look like while President Trump is in office, not what his look like.”

According to Politico, she later changed her stance by saying that Trump could release the documents when they were no longer under audit. (FYI: It is legal for them to be released when under audit).

However, despite Kellyanne’s assurance that this is an issue that’s been left behind us (an alternative fact, perhaps?), plenty of folks are still very concerned by this issue, with the proof in the petition to get President Trump to release his taxes. So many people are concerned, in fact, that the petition just broke the all-time signatures record on the White House’s petitions page (!).

While the petition was initially seeking a required 100,000 signatures within 30 days in order to have it recognized by the government (and guarantee an official update from the White House within 60 days), it has now easily surpassed that mark.

As of press time, the petition was sitting at 385,845 signatures, with more likely to be added by the due date of February 19, easily surpassing the 367,180 signatures that were added to the current record-holding petition to “legally recognize the Westboro Baptist Church as a hate group.” Oof.

Though this definitely shows that plenty of people feel that this sitch is still front-and-center, we’ll just have to wait to see what kind of impact it will have with regard to a public showing of President Trump’s tax records.

Do you think President Trump should releases his taxes? Tweet us @BritandCo!