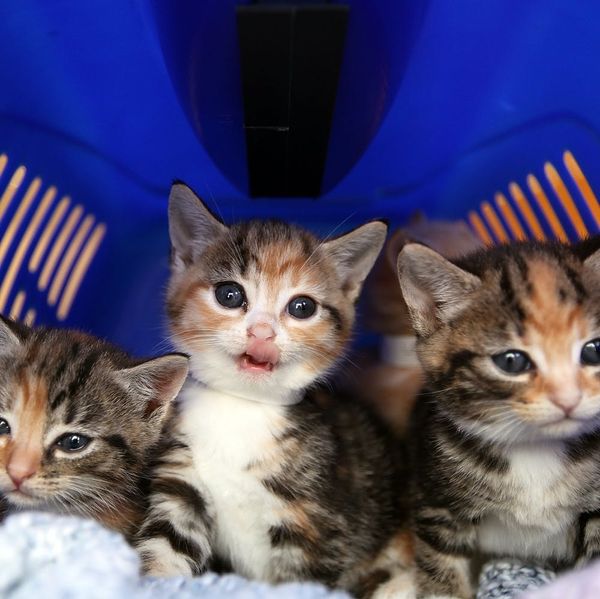 A bit of happy news for animal lovers this week: The United States Department of Agriculture (USDA) announced on Tuesday, April 2, that it will no longer use cats and kittens for lab testing and is adopting out its remaining furry residents. The decision to end the practice of testing on cats comes less than a year after a local Washington, DC, ABC news affiliate reported on a USDA lab in Maryland that has killed thousands of cats in the last few decades.

KITTEN LAB UPDATE: @USDA just announced its toxoplasmosis research has been redirected & use of cats as part of any research in ARS labs has been discontinued & will not be reinstated. Remaining 14 cats will be adopted out. @ABC7News #7OYS @WhiteCoatWaste @NEAVS pic.twitter.com/dN2ll4eP7N

According to the 2018 ABC 7 investigation, the lab infected thousands of cats with toxoplasmosis, a disease that results from exposure to Toxoplasma gondii parasites, which can be found in undercooked meat — and, notoriously, in cats who eat infected prey. The USDA claims that testing on cats was necessary in order to learn how to treat the disease, which is usually not serious and may not even be symptomatic in healthy adults who are not pregnant.

Bipartisan legislation to end the painful testing on cats and kittens was introduced to Congress in March 2019. The bill was dubbed the”Kittens in Traumatic Testing Ends Now Act,” or KITTEN Act.

According to ABC 7’s update following the USDA’s announcement on Tuesday, the USDA says it is now no longer necessary to test on cats, and that toxoplasmosis has been reduced by 50 percent in the US as a result of the decades-long research using cats for testing. The initial ABC 7 investigation revealed that 2,988 cats and kittens had died since the lab started testing toxoplasmosis on felines in 1982.

Only 14 cats remained in the lab when the USDA announced it would no longer be testing on them, and all of them will be adopted out. According to ABC 7 reporter Scott Taylor, who investigated the story last year, cats were last infected at the lab in September 2018.

“We are absolutely thrilled that kittens are out of harm’s way & taxpayers are no longer going to have to pay for cat abuse at the USDA. There was immense pressure on the USDA from both sides," says Justin Goodman, VP of Advocacy & Public Policy for @WhiteCoatWaste @ABC7News

The watchdog group White Coat Waste, which championed the KITTEN Act, wrote in a blog post on Tuesday that the USDA’s decision marks “an historic victory” for animal rights.

Elizabeth King
Elizabeth King is a politics, history, and culture writer based in the Twin Cities. She is generally pretty cranky but still enjoys traveling, music from the early 2000's, and plotting the resistance. Feel free to say hi on Twitter at @ekingc or check out some of her work at www.elizabethcking.com.
Cats
Current Events
Cats Science
More From Current Events