The Wonder Woman Premiere Created Controversy for a Questionable Reason 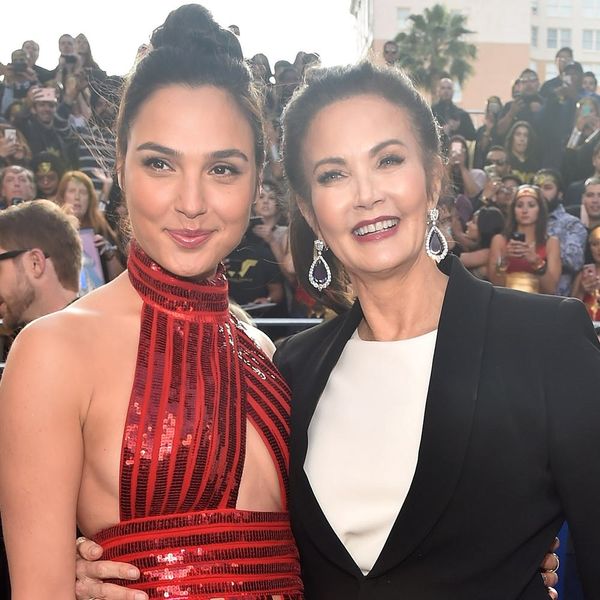 More than 40 years after the release of the original TV series, Wonder Woman premiered last night to much fanfare, with its star Gal Gadot walking the superhero blue carpet in a glitzy red halter dress with stunning cutouts. She wasn’t the only heroine in attendance, either: Her predecessor, Lynda Carter, was also on hand to celebrate the flick’s release, smiling wide as she posed for photos with Gadot.

“Wonderful (see what I did there?) to be with the lovely @gal_gadot at the world premiere of Wonder Woman!” Carter wrote on Instagram.

Wonderful (see what I did there?) to be with the lovely @gal_gadot at the World Premiere of Wonder Woman!! #wonderwomanfilm • 📸: @james.alt 😘

And yet, it wasn’t who was seen at the film’s Hollywood screening, however, but who *wouldn’t* be joining in on the fun at a separate, upcoming release event that seemed to make the biggest splash. A female-only viewing of the film has been set for June 6 at a theater called the Alamo Drafthouse Cinema in Austin, Texas, and the fellas? They ain’t too happy.

The theater has invited women ages 18 and up (six and up with an adult) to join them for a no-guys-allowed night at the movies. “Apologies, gentleman, but we’re embracing our girl power…And when we say ‘People who identify as women only,’ we mean it. Everyone working at this screening — venue staff, projectionist, and culinary team — will be female,” read the site.

The thought was too much for some to bear, with men reportedly flooding the cinema’s social media pages to express their anger.

The Alamo Drafthouse is having a women only screening of Wonder Woman. What's next? Will men and women have to use separate bathrooms?!!

my new favorite thing: Alamo Drafthouse's responses to men being Mad Online about a women-only screening of WONDER WOMAN pic.twitter.com/H8jGiYrpOO

The fact remains, however, that this doesn’t just come down to a screening for many, but a larger issue of gender identity. Wonder Woman‘s big screen debut — nearly 80 years after her introduction to the world — has been a long time coming, particularly with a new superhero film being churned out what seems like every six months. What the heck took so long to get her story made? “Since 1920, there have been about 130 superhero and comic book films with solo protagonists in the United States, both on the big and small screens,” wrote Gizmodo, adding, “Do you know how many of those 130 films had female leads? Eight.”

What’s more, as many have pointed out, it’s also the first time a superhero film was directed by a woman since 2008, when Lexi Alexander took on Punisher: War Zone, making it an even bigger historical event for women in cinema.

Then, there are those who argue that there is big difference between private women-only spaces of safety and shared feminism, and publicly discriminatory practices. After all, as The Guardian’s Naomi Wolf wrote, “Feminism in the 1970s was based on the truism that every woman ‘needed a room of one’s own.’” She goes on to express that “there are still breakthroughs in skills acquisition, learning, and leadership that happen in women-only settings,” while also noting that the same has been said of male-only settings.

"Why do those Alamo Drafthouse screenings have to be Women Only? Isn't it discriminating against men?" pic.twitter.com/iNG8wkbbru

She’s not alone in her viewpoint. As one man (yes, man — not all feminists are women!), wrote on Twitter, “This isn’t inequality. This is a business giving back to a demographic who has been largely sh*t upon by our culture for a significant amount of our shared history.”

The theater, for its part, isn’t backing down, not only trolling angry commenters, but adding a second screening of the event in response (which, like the first, sold out). They also announced plans to take the idea nationwide.

Catch the flick on the big screen on June 2.

What’s your take on a women-only Wonder Woman screening? Tell us over @BritandCo.

Nicole Briese
Nicole is the weekend editor for Brit + Co who loves bringing you all the latest buzz. When she's not busy typing away into the wee hours, you can usually find her canoodling with her fur babies, rooting around in a bookstore, or rocking out at a concert of some sort (Guns N' Roses forever!). Check out all her latest musings and past work at nicolebjean.com.
Controversy
Gender Issues
Controversy
More From Gender Issues