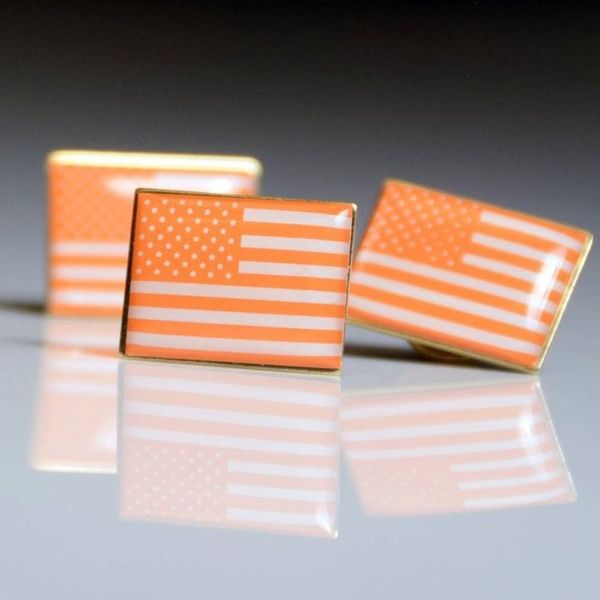 We may not be seeing a sea of black gowns on the 2018 Oscars red carpet tomorrow night, but that doesn’t mean we won’t be seeing a nod to the current political climate.

Rather than the black gowns we saw at both the 2018 Golden Globes and BAFTA Awards or the white roses we spied at the Grammys, presenters and nominees alike will reportedly be putting their efforts toward raising awareness for gun violence in the wake of recent Parkland, Florida high school shooting, which left at 17 dead.

A stylist for the awards show has confirmed to People that some stars will be donning Everytown’s Wear Orange American Flag Pins ($15 for a set of three) in order to help shed a light on gun safety.

It’s not the first time stars will have swathed themselves in the bold color for the cause: Back in June, famous faces such as Kim Kardashian West, Troian Bellisario, Julianne Moore, and Brooke Shields shared snaps of themselves wearing orange for the aptly named #WearOrange campaign, which began in Chicago back in 2013 to increase wakefulness on the topic of gun violence.

As for TIME’S UP, it’s not over, but merely changing, as organizer Shonda Rimes explained a press conference when she confirmed that black gowns would not be suggested dress at the biggest night of awards season. “The initiative launched on the red carpet, but was never intended to live there,” she said.

We can’t wait to see what else the stars will show up in!

What do you think of the idea of wearing orange pins at the Oscars? Have your say over @BritandCo.

Nicole Briese
Nicole is the weekend editor for Brit + Co who loves bringing you all the latest buzz. When she's not busy typing away into the wee hours, you can usually find her canoodling with her fur babies, rooting around in a bookstore, or rocking out at a concert of some sort (Guns N' Roses forever!). Check out all her latest musings and past work at nicolebjean.com.
Red Carpet
Red Carpet
Red Carpet