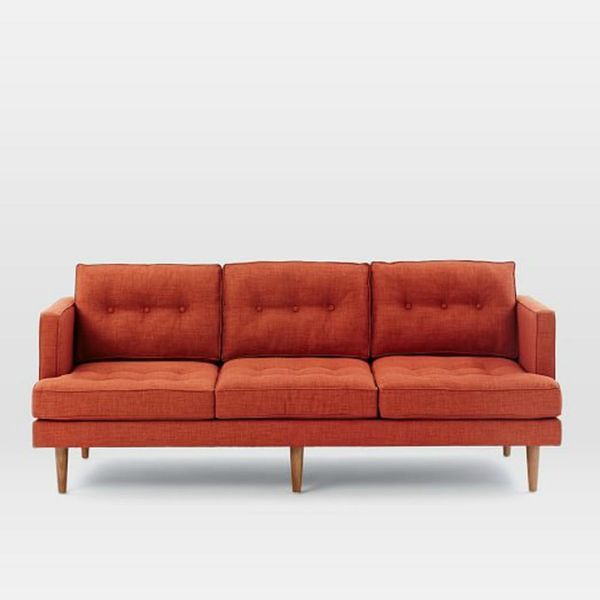 Buying your first grown-up sofa is somewhat of a rite of passage. While mid-century modern style furniture might be the look we covet (think this IKEA collection), small budgets force millennials to look for the best bang for their buck. Enter the “Peggy” couch from West Elm. This ubiquitous favorite can be seen in bachelor pads and condos across the country, but for years, customer reviews have been less than favorable.

And yet, regardless of how many (or few) stars this couch had, you’d still see it in apartment after apartment — until recently. One writer took the time to destroy any goodwill it may have had left in the public’s eye, getting it pulled from shelves FOREVER.

Thank you @silviakillings for letting me write a truly deranged tirade about one of history's worst couches https://t.co/wtCSUOQvq3

In a post for The Awl, writer Anna Hezel writes about how her “Peggy” didn’t only fall apart, it joined a long line of sofas of the same name that are shoddily made, broken, or breaking, with customers paying the cost. She mentioned a woman in Denver who wrote a 700 hundred word (!) Yelp review about the couch because she couldn’t leave a review on West Elm’s website.

A quick search of Twitter reveals that Hezel isn’t wrong: The couch has posed a problem with people for, well, forever.

@westelm just got Peggy couch & a button already fell out. Few others very loose. So frustrating. Can you help? pic.twitter.com/kqdtH8eupu

Mainly, the problems with the couch tend to be the terrible buttons (that always fall off) and its cheap legs that break and bend.

According to Hezel, West Elm has not been particularly helpful in repairing or replacing parts of the couch. Mysteriously, shortly after her post was published online, the couch disappeared from the company’s website completely. Buzzfeed reached out to some stores whose employees simply said the couch was “sold out,” but didn’t mention the article.

Incidentally, one of my friends bought a Peggy couch from West Elm. They said they delivered it but they didn't. And it was a whole thing.

With no official word from West Elm, or its parent company, Williams-Sonoma, we can’t be entirely sure why the couches were pulled, but the timing is definitely suspicious. We guess we’ll wait and see what happens with #PeggyGate, but in the meantime, you’ll have to find a different affordable-yet-chic mid-century replica if you’re furnishing your place!

Do you have a “Peggy?” Tell us about it @BritandCo!

Kat Armstrong
Kat has been a writer, social media maven and mom for longer than she's willing to admit. She's also spent time in front of and behind the camera, interviewing celebs, politicians and acting as a producer for fashion and artistic photography shoots. When she isn't writing for various orgs and publications, she's hanging with her kids, husband and French Bulldog, Peter, in Toronto, Canada.
Furniture
Entertainment
Furniture