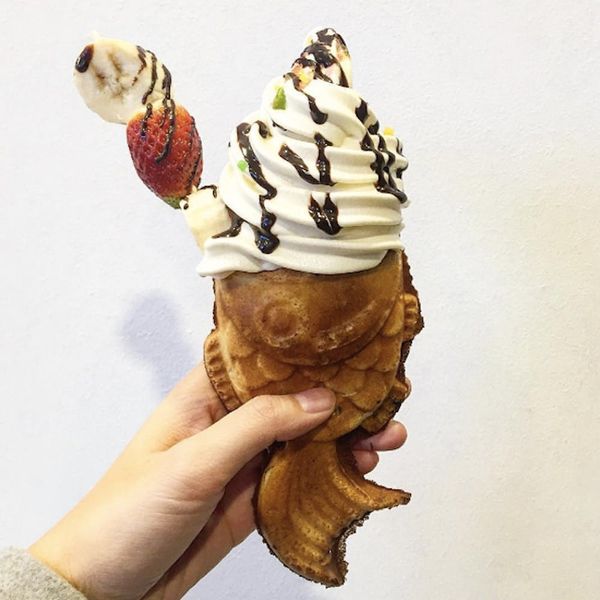 When it comes to dessert, nothing compares to what is the most delicious summer treat on the planet: ICE CREAM. No matter what form it comes in, we don’t judge — in fact, we’ll kindly take it all. Boozy, glittery ice cream sandwiches? Yes, please. Patriotic Fourth of July sundaes? Definitely. Croissant ice cream cones? Bring it on!

It’s been less than 48 hours since we fell in love with the decadent goodness of the latter, and already we’ve stumbled upon another awesome frozen treat trend that’s vying for our attentions.

Though Serious Eats explains that these little fishies initially became popular in Asia as a completely different type of treat called taiyaki (“fish-shaped pastries made of a pancake-like batter [and traditionally] filled with sweet red bean paste”) that hasn’t stopped anyone from jumping on the revamped ice cream bandwagon (us included)! Bonus? They’re totally Insta-worthy. See for yourself below!

1. @chocolatesuze: The adorbs new fad is believed to have started in Australia at Zero Degrees Sydney where, as Insta user @chocolatesuze describes, they’re carefully crafted with all the essentials: “Taiyaki fish filled with red bean, soft serve, a sprinkle of popping candy and chocolate sauce,” she writes. Seriously, how much cuter can you get?

2. @petermkk525: If you don’t live in Australia, fear not, as these edible fish are already swimming to all sorts of other countries and taking on exciting new flavors. In Japan, Tanoshii Dezato serves theirs in a wide array of flavors, including black sesame and chocolate, plus all kinds of fruit toppings.

3. @halimagoga: Meanwhile, traveling from Down Under to London, these cute cones are served in a green tea version at Chinatown’s Bake. Insta user @halimagoga documented her indulgence, giving followers more deets on the exact location where they can score one: “Taiyaki fish shaped Waffle/Cake Cone with Matcha Soft Serve. Place called ‘Bake’, 9 Wardour Street, opposite the W Hotel, China Town.”

4. @tienamayra: As Insta foodie @tienamayra joked, “Keeping my food in shape keeps me out of shape.”

BRB, we’ll just be over here, booking our flights. Who’s with us?

Barbara Pavone
Barbara Pavone is a pop culture-obsessed writer based in beautiful (but ridiculously cold) Montreal, Canada. When she's not working, she's sipping on a Pimm's Cup and daydreaming about her celebrity hero, Saint West.
Dessert Recipes
Most Recent
Dessert Recipes Ice Cream