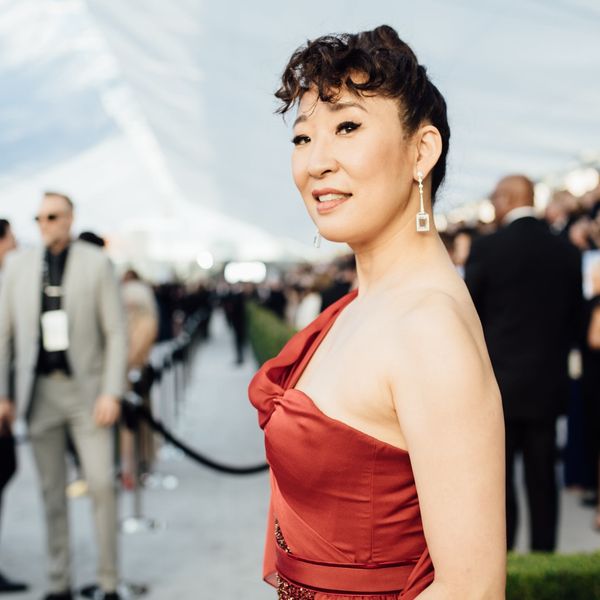 On Wednesday, April 17, Time magazine unveiled its 2019 list of the 100 Most Influential People in the World. It features Michelle Obama, Ariana Grande, Brie Larson, Taylor Swift, Chrissy Teigen, Lady Gaga, Sandra Oh, and many more, all with short profiles written by their peers. We highly recommend checking out each of the full write-ups and the entire Time 100 package — there are videos, behind-the-scenes details, and even a companion Spotify playlist! — but in the meantime, here are just a few of the best and most powerful quotes. (Photo via Emma McIntyre/Getty Images for Turner + Dimitrios Kambouris/Getty Images for Turner + Frazer Harrison/Getty Images + Christopher Polk/Getty Images)

Shonda Rhimes on Sandra Oh: "With her nuanced characters, Sandra Oh has chosen to fearlessly take up space in a universe that has not always made space for her," wrote Rhimes, who worked with Oh on Grey's Anatomy for 10 years. "Now, the power of her talented presence makes space for others. And that is a gift to every artist of color who follows in her footsteps." (Photo via Emma McIntyre/Getty Images for Turner)

Viola Davis on Regina King: "We're on the battlegrounds together as women and women of color," Davis said of the If Beale Street Could Talk star. "Regina enjoys watching other actors fly. And that is rare in a profession that is about deprivation." (Photo via Frazer Harrison/Getty Images)

Emma Thompson on Emilia Clarke: "She has the courage of a small lion, the stamina of a Welsh pit pony, and the soul of a clown," Thompson said of her Last Christmas costar. "A powerhouse to watch and an ally to die for." (Photo via Dimitrios Kambouris/Getty Images for Turner)

Tessa Thompson on Brie Larson: "Brie Larson is a warrior on- and offscreen," Thompson wrote of her Avengers: Endgame costar. "She sits at a table and wants to make sure everyone has access to it. She is constantly investigating how to be a better ally. … She is in a position to make real systemic change in Hollywood. I'm elated to see someone so pure of intention wield that power." (Photo via Christopher Polk/Getty Images)

Tim Tebow on Joanna and Chip Gaines: "Through remarkably hard work, Jo and Chip have created a platform to be able to impact lives," the former NFL star wrote. "Loving people matters. And Jo and Chip are amazing at loving people." (Photo via Mireya Acierto/FilmMagic)

Troye Sivan on Ariana Grande: "Through just about the craziest storms and whirlwinds I can imagine, Ariana Grande remains the most real person I've met," Grande's friend and collaborator Sivan said. "I've always thought the world is privy to actual, genuine emotion — be it heartbreak, empathy, generosity, resilience, strength — and I believe that's exactly why the world keeps falling deeper in love with Ariana." (Photo via Rich Polk/Getty Images for iHeartMedia)

Shawn Mendes on Taylor Swift: "Taylor makes anyone older feel young again and anyone young feel they can do anything," Mendes wrote of the pop superstar. "It's so rare and so special. If there is one thing I want to achieve in my career and life, it's that." (Photo via Emma McIntyre/Getty Images for dcp)

Beyoncé on Michelle Obama: "Loving Michelle Obama wasn't much of a choice. … Because she resembled us and was moving in spaces where, as Black Americans, we weren't exactly meant to be, she seemed so powerful," Beyoncé wrote of the former first lady. "I am so grateful that my daughters and my son live in a world where Michelle Obama shines as a beacon of hope who inspires all of us to do better and to be better." (Photo via Alex Wong/Getty Images)

Celine Dion on Lady Gaga: "She empowers her fans… to stand up for what they believe in, despite what others might think," the music icon said of Gaga. "By doing so, she gives her followers the strength and confidence to believe in themselves. Whether it's her unstoppable support for the LGBTQ community, or her anti-bullying campaigning, Lady Gaga's voice is being heard where it really counts." (Photo via Neilson Barnard/Getty Images)

Ava DuVernay on Gayle King: "To be present, but not centered. To observe. To bear witness. Gayle has long honed this craft," DuVernay said of King. "So the fact that this year she is being lauded as one of the all-time great broadcast interviewers is simply the perfect signifier, a few decades overdue. Luckily for us, we've finally decided to regard her in relationship to herself. To see her for the truth seeker that she has always been." (Photo via Dia Dipasupil/Getty Images)