These Texas Teens Are Protesting Their State in Quinceañera Gowns 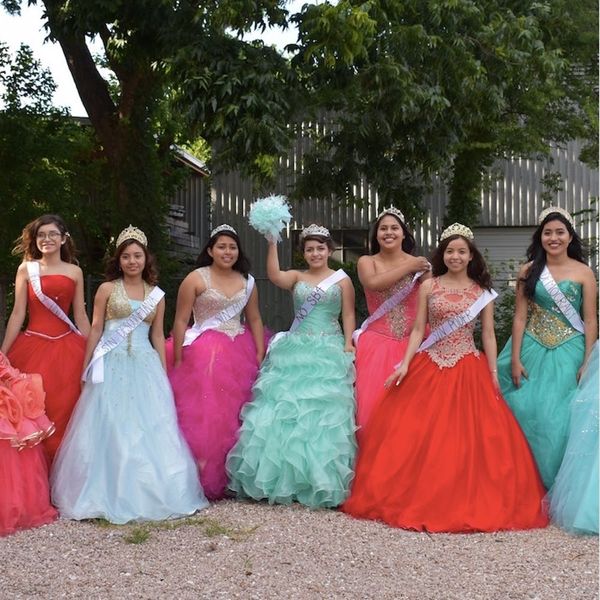 Today, 15 young Latina women are heading to the Texas State Capitol in downtown Austin to send a uniquely powerful message to the lawmakers that run their state. Joining the ranks of young women all over the world who are standing up to the injustices they see in their countries and communities, they’ll protest a controversial new immigration law that gives police (and any other law enforcement officer, including university and school district police departments) the power to ask detainees questions about their immigration status.

The teens will gather in Austin to voice their objection to the law, Senate Bill 4, before it comes into effect on September 1. And to top it off, they’ll be dressed in bright, beautiful quinceañera dresses, melding a traditional celebration with a political protest to create a statement unlike any other.

Following a performance of Lin-Manuel Miranda’s “Immigrants (We Get the Job Done)” and Los Tigres Del Norte’s “Somos Más Americanos,” protesters will meet with state legislators to deliver personal messages about why they’re taking a stand against SB4. The gathering is being called “Quince at the Capitol,” a double play on the number of protesters and the celebration of a young woman’s fifteenth birthday in many Latino cultures.

We spoke to protest organizer and Jolt Texas Executive Director, Cristina Tzintzún, to learn more about how this new law will affect communities and what these young women are doing to oppose it.

Can you list some of the ways that this new law, when it goes into effect on September 1, will impact the daily lives of members of the Latino community in Texas?

SB4 makes being brown and undocumented a crime in Texas. Under this law anyone can be asked to show their proof of citizenship just because of the color of their skin. This law will lead to increased racial profiling and will drive victims of crime into the shadows because they will be too afraid to report crimes.

This law really inspires a new kind of distrust in communities. It’s not only police that will enforce ICE’s policies under SB4: People like city council members, local governing bodies, city and district attorneys and police on college and university campuses also must report to ICE, which only widens the circle of people to be distrustful of. Officials who don’t comply can be removed or fined with misdemeanor charges, so officials that have close ties to certain communities will no longer be able to stand with the communities that they were chosen to represent.

If someone is the victim or witness of a crime, officers can just ask about their immigration status. Imagine trying to help someone else or getting hurt in an accident, but then getting deported for trying to do the right thing.

One of the most shocking elements of SB4 is that it allows children to be asked about their immigration status. Parents may no longer feel comfortable to let their kids play outside, walk home from school, or go out to the park because they can be questioned just for being brown. We need the public to understand that all people of color will face discrimination under this law: Anyone who looks “foreign” to public officials will be subject to questioning.

The instinct for a lot of people right now would be to hide in the face of things like the Trump administration’s cancelled threat to repeal DACA, the travel ban, and “show me your papers” laws like Senate Bill 4, but this protest is about the proud celebration of culture — where do these young women find the courage to do that?

After someone finds their voice and their power, there’s no stopping that momentum. These young women are not only proud of their culture, but they know that their voices matter. They saw at their own quinceañeras how their families came together to celebrate, and they saw how beautiful and powerful that can be. This pride and resilience — even in the face of this kind of hateful and fearful rhetoric — is what our communities need to see most. We know that through celebration we can be proud of being brown Latinas and that this joy and pride encourages more people to be proud of who they are.

When I thought of doing a Quinceañera protest it was 2 also say #BrownisBeautiful that we resist hatred w/pride https://t.co/wOf8MvMX1h #Sb4

Protests are frequently marked by anger and violence but this one features singing and bright, beautiful, cheerful quinceañera dresses. Why go that route? What makes it so powerful?

We know that celebrating our culture and our existence is a cure to hateful acts like SB4. This hateful law wants to silence us and drive us into the shadows, so in order to resist we must stand tall and show that we are proud and unafraid.

This bright and exciting protest celebrates our culture and will hopefully inspire young Latinos to come up with creative acts of resistance too. It may sometimes seem that there’s not much that we can do in the face of such racism and discrimination, but there is actually so much we can do. By joining together in celebration and pride at Quince at the Capitol, we will send a strong message to all Latinos that now is the moment to exercise our voices and our power.

On Wednesday, 15 quinceañeras will confront lawmakers who voted for SB 4 with their own personal reasons for resisting the law. Can you share some of those reasons with us?

These quinceañeras demand accountability from our political representatives. There are 11 million Latinos here in Texas, and we make up 40 percent of the population. We deserve respect and representation, not the discrimination that SB4 promotes. More and more young Latinos today are of voting age and will have the power to vote out representatives that don’t support and protect our communities. If we come together, organize, and demand accountability, politicians like our Governor Greg Abbott won’t mess with us. This is what we are trying to show with this event: that young Latinas are powerful, and we demand better than SB4.

A big reason that we are resisting this action is for family unity. SB4 threatens to break our communities apart through distrust and tear our families apart through deportation. Through this action, we want to say that we are not going anywhere, and neither are our family members or loved ones. We deserve to be here and to live in peace and safety as much as anyone else.

Another huge reason that these women are resisting is to say no to racism and racial profiling in our state. This law is an attack on all people of color in Texas and beyond, and we will resist.

Are you a teen who’s thinking of getting involved in activism in your community? Let us know on Twitter.

Corrina Allen
Corrina Allen is a film + television + travel writer from Toronto. Her journalistic goals include a backstage interview with David Byrne, the fictional character she identifies most closely with is John Wick, and her favorite dead person is Vladimir Nabokov. She never, ever Instagrams photos of her food (just her dog).
Ladies First
Current Events
Ladies First Politics
More From Current Events