Tom Hardy Is Getting a Tattoo from Leonardo DiCaprio 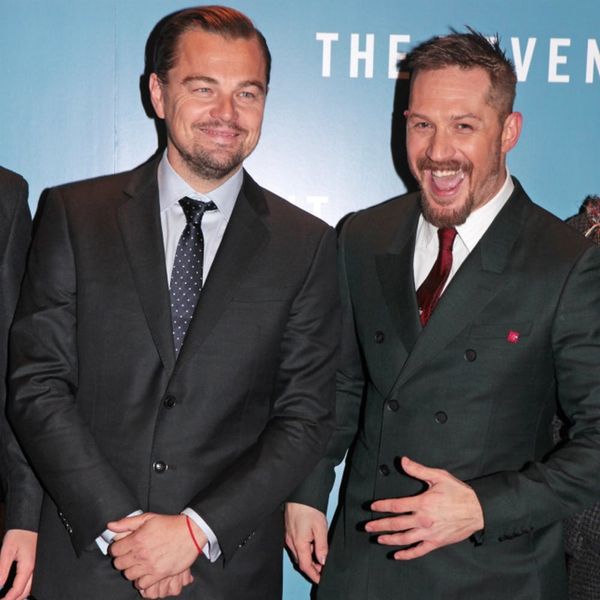 Tom Hardy seems like the kind of guy you just want to have in your life. The actor is incredibly gorgeous, funny and smart, and his love of dogs is beyond words. He also is apparently a really loyal friend, one who doesn’t back down when faced with a bet. While starring with Leonardo DiCaprio in 2015’s The Revenant, the two actors entered into a bet which may turn out to be devastating for Hardy.

In an interview with Esquire Magazine, Hardy spilled the beans on his yet-to-be fulfilled bet with DiCaprio. It seems that during filming, the actors wagered on whether or not Hardy would be nominated for an Oscar for his role as baddy John Fitzgerald alongside Dicaprio’s Oscar-winning performance as American legend Hugh Glass (yes, The Revenant is a true story!). Dicaprio was positive Hardy would get nominated. Hardy said he wouldn’t, but Leo was right and Hardy was nominated, meaning that as the bet’s loser, Tom would have to get a tattoo completely designed by Leo.

Hardy is no stranger to tattoos, but this one, he says, is very ugly. He’s delayed honoring the bet, because Leo’s design isn’t exactly top-notch. “He wrote, in this really sh***y handwriting: ‘Leo knows everything,’” said the actor. He has yet to get the “design” done because even though he asked Leo to rewrite it, it’s still in this awful handwriting. Plus, where would you even place a tattoo like that?

Obviously, this isn’t the worst tattoo of all time, but we’re sure that it won’t really fit in with all the gorgeous work that Hardy currently has. Maybe if he eventually gets it done, he’ll show us where he put it (we’re hoping for ribs, TBH).

Do you have a tattoo horror story? Tell us @BritandCo!

Kat Armstrong
Kat has been a writer, social media maven and mom for longer than she's willing to admit. She's also spent time in front of and behind the camera, interviewing celebs, politicians and acting as a producer for fashion and artistic photography shoots. When she isn't writing for various orgs and publications, she's hanging with her kids, husband and French Bulldog, Peter, in Toronto, Canada.
Halloween
Celebrity News
Halloween Tattoos
More From Celebrity News