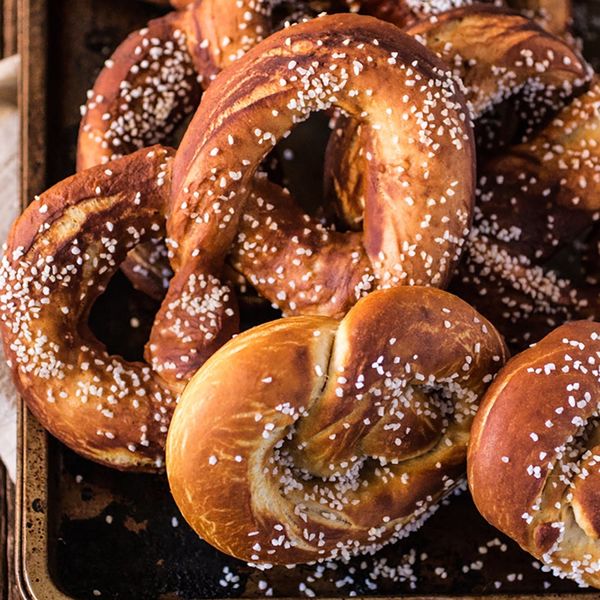 Bratwurst is great, but there's a lot of other German food worth talking about. For most of the year, Germany is a pretty cold place, so the traditional fare includes all the delicious meaty, potato-y, and cabbage-filled dishes you’d expect. Their salty, crispy schnitzel and potato pancakes put our fries and nuggets to shame. And they don’t skimp on dessert either — the Germans really do love Black Forest cherry cake (or Schwarzwald kirsche kuchen, as it’s known there), and they make pudding better than anyone else in the world. Here are 13 classic German recipes that’ll make you want to book a trip straight to Frankfurt.
Spaetzle: This eggy noodle dish is like the German equivalent of mac and cheese — eating it feels like home, even if you aren't German. (via The Wanderlust Kitchen)
Pork Schnitzel: Schnitzel may sound intimidating, but it's actually super easy to make. One special tool you'll need is a meat tenderizer, which you'll use to pound the pork chops until they're nice and thin. (via Natasha's Kitchen)
Grießpudding: This treat is so German, you can only find recipes for it on German blogs. A type of semolina pudding, it's a sweet dream and eating it is like taking a bite of a cloud. (via Kleiner Kuriositätenladen)
Laugenbrezel: It's impossible not to include pretzels in a roundup of German food. These ones are especially delicious, because they're made with beer, malt syrup, and lots of butter, all of which make them softer than the ballpark pretzels you might be used to. (via Olivia's Cuisine)
Rouladen: This recipe comes straight from food blogger Livin' the Pie Life's German grandma, or Oma as she calls her. It's comprised of beef rolled up with bacon, onions, and mustard, and finished off with sour cream. If that doesn't sound amazing, we don't know what does. (via Livin' the Pie Life)
Schwarzwald Kirsche Kuchen: The original Black Forest cake comes straight from the region surrounding the actual Black Forest. Though this recipe isn't that authentic, it comes as close as possible to what the versions you might eat in Germany taste like. (via Also the Crumbs Please)
Rote Grütze: In German, the word "rote" means red, and this dessert is all about the red berries. In this recipe, a mix of raspberries and blackberries are stewed with sugar, brandy, and a bit of vanilla, then topped with a luscious vanilla cream sauce. (via Stellar Ash)
Kartoffelpuffer: These potato pancakes are actually super easy to make and no more challenging than a basic batch of latkes. (via The Culture Dish)
Dutch Baby: Dutch baby is a bit of a misnomer. If you ask any German, they'll tell you that they created this breakfast favorite, not the Dutch. It's great plain as featured above, and even better topped with syrup, fruit, and whipped cream. Maybe even try topping it with that rote grütze. (via Lovely Little Kitchen)
Apfelstreusel: Germans and Americans aren't so different after all — we both adore apple desserts like the apple streudel featured here. (via Plated Cravings)
Kartoffelsalat: German potato salad is different from what we have in America, because it doesn't use mayo. Instead, it combines potatoes (FYI that's kartoffeln in German) with bacon, mustard, a bit of sugar, and garlic to create a dish that's at once sweet, savory, and little spicy. (via Five Heart Home)
Sauerkraut: Once you perfect this famous recipe, you can practically consider yourself a German. (via Earth Food and Fire)
Sauerbraten: What makes this German pot roast different from others is that it's traditionally marinated for two days in red wine, vinegar, and lots of spices. Cozy AF is the only way to describe the results. (via Kitchen Frau)

Related Articles Around the Web
Audrey Bruno
Audrey is a food and travel writer currently living in Berlin. She's always on the lookout for funky wine, sour beer, and the dirtiest martinis, and if she were a food, she'd be a pickle.
Recipe Roundup
Recipes
Recipe Roundup Travel
The Conversation
More From Recipes