Transform Your iPad into an Old School Etch A Sketch 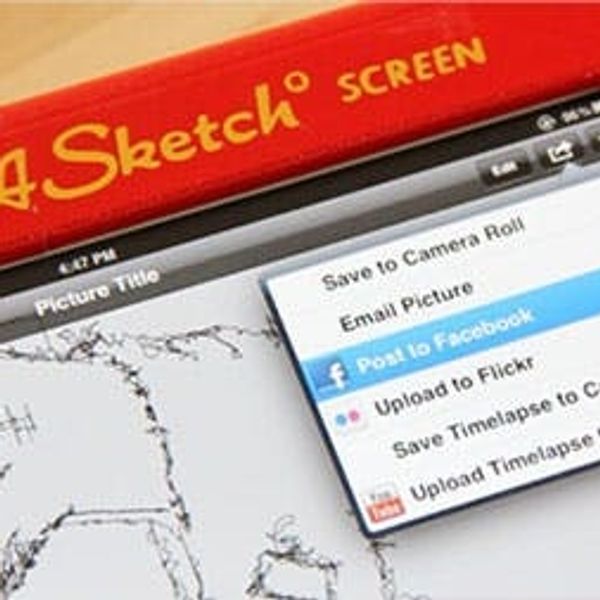 Remember road trips spent in the back seat mastering the art of the Etch A Sketch? Sometimes you just drew lots of lines, sometimes you wrote messages to your siblings, and every so often you ended up with a masterpiece. But then, with just a shake, your Mona Lisa disappeared and you had to start over.

The Etcher takes the awesomeness of the classic Etch A Sketch and combines it with the iPad for a fun, modern upgrade. And no, it's not just a case. It actually works!

Once you slip your iPad into the Etcher case, open up the Etcher App and get ready for a dose of nostalgic revelry. As you turn the Etcher's knobs, lines appear on the iPad screen, exactly like the original Etch A Sketch. It even erases when you shake it!

But, in a lot of ways, it's better than the original. If you find yourself particularly proud of your latest sketch, you can save and share the photo with family and friends, and you can even save a time-lapse film of the drawing process. It really takes the art of the Etch A Sketch to a whole new level.

Best of all, the Etcher makes the Etch A Sketch much more relevant to kids today. Parents can show off their etching mastery, and kids can add the Etcher to their arsenal of creative digital gadgets.

The Etcher is currently looking for funding over on Kickstarter. Founder Ari Krupnik is working directly with Apple and Ohio Art Company (Etch A Sketch's parent company) to get all the licensing in place, and are even toying with the idea of manufacturing the Etcher in Ohio Art's Etch A Sketch factory! If you choose to fund, cases will ship around October. We can't wait to try it out!

Anjelika Temple
As Co-Founder and Chief Creative Officer of Brit + Co, Anjelika Temple brings her voracious consumption of all things creative and colorful to DIY projects, geeky gadgetry finds and more. When she's not DIY-ing her heart out, you'll find her throwing dinner parties with friends or adventuring with her husband David, their daughters Anokhi and Indira, and their silly dog Turkey.
Nostalgia
Tech
Nostalgia
More From Tech