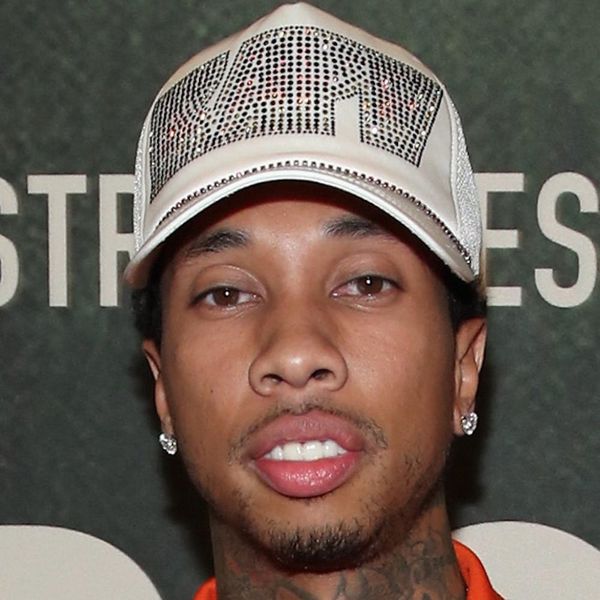 Kylie Jenner may be enjoying new parenthood with boyfriend Travis Scott, but long before she was being showered with no less than 443 (!) roses to commemorate the time of daughter Stormi Webster’s birth, Jenner was calling another man her beau: musician Tyga. Now, he’s sounding off about his former paramour’s babe, and why they called it quits.

Fans first began speculating that the pair of roughly three years might be throwing in the towel back in March of 2017. The makeup mogul seemed to confirm the news when she was spotted hanging out with Scott at Coachella in April, and put what appeared to be a final nail in their coffin when she covered up her former beau’s initial tattoo in June.

She later opened up about her breakup on The Life of Kylie, saying, “The hardest part about having a relationship, for me, is that it’s just blasted all over the internet, you have to hear about other people’s opinions, on who you’re with — it’s a lot.”

Though the reality star’s ex has remained largely silent with regard to both their split and her pregnancy, he’s finally opening up about both, speaking to Complex’s morning show, Everyday Struggle.

If you expected him to badmouth his ex, however, you’d be sadly mistaken: It seems the 20-year-old’s one-time love has nothing but well wishes for her, explaining things as simply as possible.

“You just get older, you feel me?” he told the radio hosts around the 45:00 mark. “It was a relationship that was in front of the world and that was it. She has her new life, and I have my new life, and that’s it. There’s no bad blood or problems.”

What’s more, he says, they still “communicate here and there.” He even went so far as to give Scott his seal of approval, saying, “He’s cool.”

When asked if he would be visiting her new child anytime soon, however, he quickly changed the subject, saying, “Whoa, homie! Ask me another question, man.”

Kudos to Tyga for handling the interview like a true gentleman!

What do you make of Tyga’s comments? Share with us over @BritandCo.

Nicole Briese
Nicole is the weekend editor for Brit + Co who loves bringing you all the latest buzz. When she's not busy typing away into the wee hours, you can usually find her canoodling with her fur babies, rooting around in a bookstore, or rocking out at a concert of some sort (Guns N' Roses forever!). Check out all her latest musings and past work at nicolebjean.com.
Celebrities
Celebrity News
Celebrities Celebrity Breakups Celebrity Couples Kardashians Kylie Jenner
More From Celebrity News