The US Women’s Soccer Team Is Suing for Equal Pay 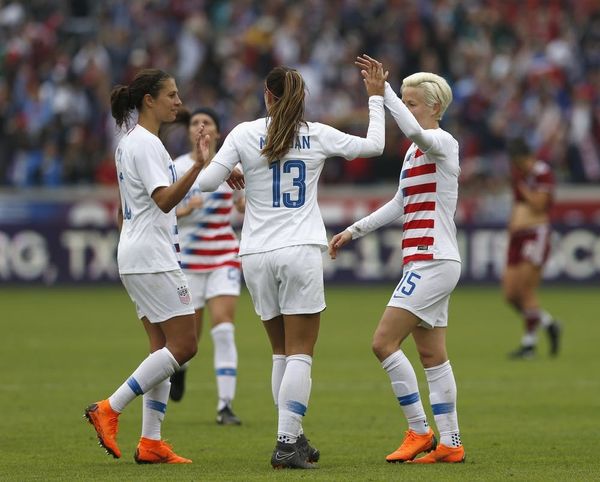 The players on the US women’s soccer team are some of the best (and best-known) athletes in the world. They’re Olympians, record-setters, and the reigning Women’s World Cup champions, but according to a new lawsuit, they’re still “consistently paid less money than their male counterparts.”

On Friday, March 8 — International Women’s Day — 28 members of the team filed a legal complaint against their governing body, the United States Soccer Federation, over what the lawsuit describes as “institutionalized gender discrimination.”

“Despite the fact that these female and male players are called upon to perform the same job responsibilities on their teams and participate in international competitions for their single common employer, the USSF, the female players have been consistently paid less money than their male counterparts,” the lawsuit states. “This is true even though their performance has been superior to that of the male players — with the female players, in contrast to male players, becoming world champions.”

The players named in the suit, including stars such as Carli Lloyd and Megan Rapinoe, are seeking class-action status in order to have the lawsuit represent both current and former members of the women’s national team, dating back to February 2015.

“We believe it is our duty to be the role models that we’ve set out to be and fight to what we know we legally deserve,” Christen Press told the Associated Press. “And hopefully in that way it inspires women everywhere.”

The lawsuit is the latest development in what has been an ongoing battle between the women and US Soccer. Back in 2016, five members of the women’s team filed a federal complaint with the Equal Employment Opportunity Commission over wage discrimination, saying at the time that they were being paid, on average, 40 percent less than their male counterparts. That complaint also alleged that women were given less in bonuses and a smaller per diem than the men.

Although the claim was never resolved, players received a “right to sue” letter from the EEOC in February of this year. And while the gendered pay structures — as per the New York Times — are tricky to unravel, the women have already made gains in their financial bargaining, which could bode well for the suit.

This isn’t the first time US women’s soccer players have united to fight for gender equity. Back in 2000, the entire first string of the team boycotted to protest an unfair wage gap.

RELATED: 20 Women in Hollywood Who Have Spoken Out for Equal Pay

Kat Armstrong
Kat has been a writer, social media maven and mom for longer than she's willing to admit. She's also spent time in front of and behind the camera, interviewing celebs, politicians and acting as a producer for fashion and artistic photography shoots. When she isn't writing for various orgs and publications, she's hanging with her kids, husband and French Bulldog, Peter, in Toronto, Canada.
Empowerment
More From Empowerment