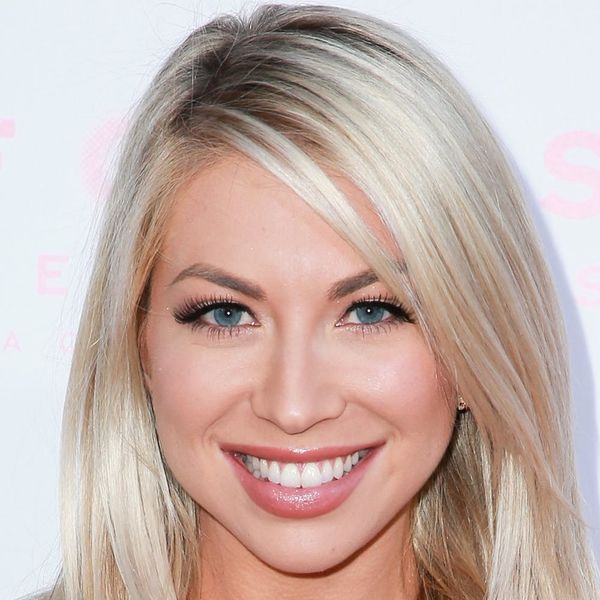 Stassi Schroeder is known for being outspoken, but the reality star has found herself in some seriously hot water with endorsers over comments she made on her podcast, Straight Up With Stassi, regarding the #MeToo campaign.

In a now-deleted podcast, Schroeder, along with friend and Pucker & Pout blog founder Jennifer Hoffman, took on the recent allegations of sexual assault and harassment that have come forth in recent weeks with an episode titled “Are We on a Male Witch Hunt?”

While sounding off about the topic, the girls made several comments that many found to be controversial regarding both sexual and domestic violence.

“A lot of them are more than willing to go to that hotel room,” Schroder, 29, quipped, adding that no one could make her perform sexual acts she wasn’t willing to do barring the use of excessive force. “It’s the easiest thing to just be like, no… I’ve been reading all these stories of women who were maybe making out with this person, and then they were forced [to perform sexual acts],” she said. “I’m like, wait, sounds like he thought you liked it, because you were making out with him, but now, years later, when it’s now a trend to say #metoo, you’re gonna come out and say that you were sexually assaulted?”

About 5 ppl heard this podcast & everyone else read ONE quote without the backstory or context of a TWO hour episode. pic.twitter.com/23EMPZpcMU

The reality starlet went on to say that cases in which women, or “hamsters,” as she referred to them, who made sexual abuse allegations to “avoid embarrassment” over their actions ‘”rustrate me, because it takes away from the actual victims, people who have actually experienced this, and that is what frustrates me so much,” later adding, “To the victims, we’re on your side… but we don’t know the truth about so many of these things.”

Hoffman responded to say that people aren’t thinking of the consequences of naming an alleged abuser in the era of “mob justice,” adding, “You name one person on the internet, and it blows up, and maybe they didn’t even do anything, maybe you had a bad day… a lot of times, that has happened.”

The Vanderpump Rules star summed things up by saying, “My main two issues are that one, men that actually have not done anything are being accused and their reputation’s being ripped apart… and there are other people… that are collateral damage, like the crew… and then my second issue is that I want to be able to be alone in a room with a dude and not have him be scared of me, and I want… the men that I work with to still be able to joke.”

Rent the Runway, for one, was NOT pleased to hear backlash regarding the comments, terminating its relationship with her podcast “effective immediately” after fans flocked to social media to sound the alarms to the company.

We’re shocked by @stassi's comments re the #metoo campaign. It goes against everything RTR stands for as a company and has publicly advocated. Our 1st ads were slated to run on Mon but effective immediately we’ve terminated our relationship with her podcast.

“We’re shocked by @stassi’s comments re the #MeToo campaign,” the company wrote in a tweet. “It goes against everything RTR stands for as a company and has publicly advocated. Our first ads were slated to run Monday, but effective immediately we’ve terminated our relationship with her podcast.”

In no way do @stassi's comments about the #metoo campaign reflect our beliefs. We are ending our relationship with the Straight Up with Stassi Podcast effective immediately. We will always stand by brave women sharing their stories.

Framebridge quickly followed suit, tweeting out a similar message, adding, “We will always stand by brave women sharing their stories,” as did Simple Contacts, who wrote, “To suggest that the #metoo campaign is made up of attention-seekers belittles the pain and suffering so many women experience on a regular basis.”

Simple Contacts doesn’t agree with or condone the opinions of @stassi. We’ve pulled our ads from her podcast. Full statement below. pic.twitter.com/xnPU0Sl62S

Schroeder, for her part, says that the comments were “taken out of context” from a two-hour episode, and that she’s working on a follow-up podcast for clarifications.

When asked why she deleted the original podcast, she responded to say, “Because a lot of people aren’t ready for it yet.”

Do you think Stassi’s comments were taken out of context? Tell us over @BritandCo.