This Vegan Portuguese Kale Soup Recipe Will Cure What Ails You 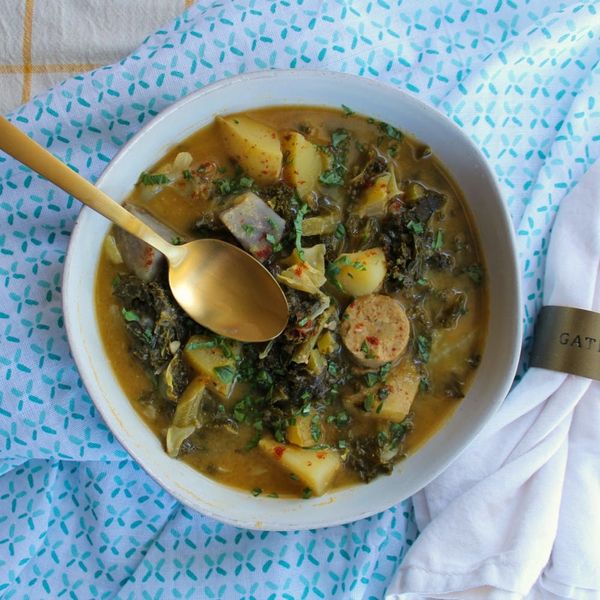 Whenever I’m craving comfort food, I make a big pot of vegan kale soup. Growing up, it was a cure-all remedy in our house. Winter wind just a little too cold? Make the soup. Schoolyard bullying got you down? Mom made the soup. It was also our food of celebration. When my grandma came into town she’d make the soup, her version just ever so slightly different than my mom’s. We’d sit together in the kitchen peeling the skins from soaked lima beans (the secret ingredient to our broth), my grandma’s knobby arthritic fingers working faster than anyone else’s. The pot would simmer on the stove for hours, filling the house with its spicy, savory aroma, until finally it was ready. My aunt and cousin would come over, and we’d celebrate being all together, filling and refilling our bowls with our family’s ambrosia. These days, I eat a plant-based diet. At first, that was big cause for alarm with my mom, who was worried that she wouldn’t be able to ply me with bowls of her kale soup when I was home for visits. Luckily, we found a way to make a tasty vegan version that’s still just as comforting.

Traditionally, the kale soup my family makes contains Portuguese chouriço (pronounced “cherise” in my family’s southern Massachusetts dialect). It’s what makes a soup with such humble ingredients come to life. So, when recreating the soup sans sausage, I decided to add all of the ingredients that give chouriço its red color and garlicky, salty flavor to the broth itself. The result is a pot of goodness that tastes just like home, even if it is devoid of meat. Lima beans are the key to giving the broth extra body. You soak them overnight, then remove the skins. It might sound finicky but it’s really quite easy. Once your beans are peeled, you’re ready to go!

This is an Old-World soup, meaning the kale and cabbage are cooked more than you might be used to. They’re supposed to be very soft in the final dish, almost melting in your mouth. This kale soup is closer to the chunky caldo verde of the Azores than the more broken-down version found on mainland Portugal.

If comfort food is the name of your game, follow us on Pinterest for more cozy recipes.

Justina Huddleston
Justina Huddleston is a food writer living in Los Angeles. When she's not busy writing, she spends her time in the kitchen creating both virtuous and decidedly junky vegan food. Buffalo chickpea pizza, anyone? She's also been known to eat a plain block of tofu or beans straight out of the can for lunch, but somehow those culinary adventures don't make it to her Instagram. You can follow Justina on Twitter or see what's cooking in her kitchen on her blog, A Life of Little Pleasures.
Comfort Food Recipes
DIY Recipes
Comfort Food Recipes DIY Soup Recipes
The Conversation (1)
Reviews:

This soup looks and sounds amazing! I want to make it but I'm a bit confused because two different times it says to "Top the pot off with enough water so it's 3/4 full." Are you really supposed to do that two separate times? And isn't that hard to know if you're adding too much or too little water because everyone will have slightly different sized pots? I want to make this but don't want to screw it up! HELP, please!