Why You Should Wear Some Green on St. Patrick’s Day 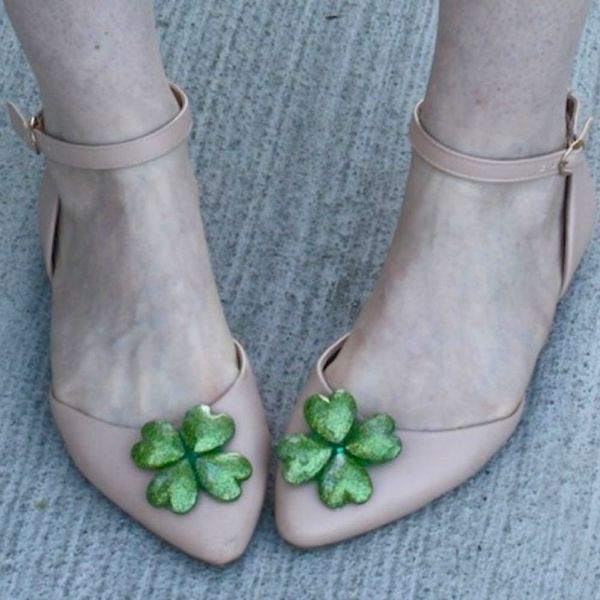 While we’re all washing down corned beef with our Guinness during next week’s St. Patrick’s Day festivities, we’d best be sporting some green — or get pinched for it. You know the old saying. Well, we wouldn’t want that! Here are 18 green dresses that will work for St. Paddy’s Day. The greens are all different shades and hues, so there’s likely to be one that’s just right for you.

Not in the mood to wear head-to-toe green? How about just a bit of green bling? Over at New Dress a Day, Marissa Lynch is DIY-ing some sparkly shamrocks to dress up her shoes.

It surprised us to learn that pinching folks for not wearing green is a wholly American tradition. According to the folklore, leprechauns — mischievous little fairy creatures who liked to play tricks — thought it a fun prank to go around pinching people when they weren’t looking. Wearing green supposedly made you invisible to leprechauns. If you did get pinched, it was because the leprechauns could see you. And this was considered just punishment for not wearing green in honor of the Emerald Isle. (Via the Christian Science Monitor)

In actuality, the roots of this custom are probably more political than that. You can Google the song “The Wearing of the Green” if you are interested.

Quite a few beloved St. Patrick’s Day customs are actually American cultural inventions. Take corned beef and cabbage, for example. It’s not a traditional meal back in the old country but a poor man’s substitute for the Irish dish bacon and cabbage. Irish immigrants in New York City’s lower east side who were yearning for a taste of home couldn’t afford thick-sliced bacon (and even if they could, American bacon is not the same as Irish bacon). What they could afford, and what was readily available, was corned beef brisket from neighboring Jewish butchers.

If you’ve a hankering for the real deal, here are 19 true Irish eats, drinks and traditions.

Do you know of another St. Paddy’s Day custom that’s a wholly American invention? Tweet us at @BritandCo.

(Photo via New Dress a Day)