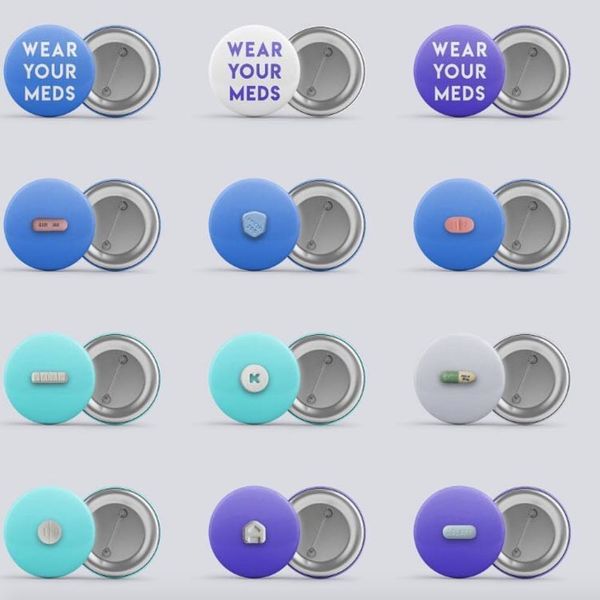 Wear Your Meds, the brainchild of 29-year-old advertising and copywriting student Lauren Weiss, is an online store that sells decorative buttons that allow you to literally wear your meds. Each simple pin depicts the image of a mood-regulating drug on a monochromatic background. There are currently buttons available for 14 commonly prescribed antidepressants and other mood-regulators like Lorazepam, Lithium, and Xanax, in addition to some that simply read “WEAR YOUR MEDS.” Proceeds from button sales support the National Alliance on Mental Illness.

The project has personal origins for its creator. Weiss was formally diagnosed with Bipolar II in 2017. By phone from her home in New York City, Weiss tells Brit + Co that when she first went to see her psychiatrist, she was adamantly opposed to the idea of some medications. Her aversion was based almost entirely on media portrayals of negative drug side effects.

“People have mixed reactions no matter what the medication is,” she tells us. “I think you hear all the horror stories when you’re watching movies or in the news. It’s just not common to see people having success stories, because it just doesn’t make for a good movie.”

Weiss’ perceptions changed after her medication (an anti-seizure medication that also works for people with bipolar disorder) took effect and transformed her life for the better. She vowed to remain open about the experience, so that others might follow suit and get a chance to live their own best lives.

“I tend to talk about it a lot with friends, and work on it at school,” she says. “Talking to people, having a very person-to-person conversation, giving them my experience, telling them how much I definitely tried [non-medicinal] routes… but ultimately, medication was completely necessary for someone like me who has bipolar.”

Weiss recognizes, however, that Wear Your Meds is a project made possible by her own privilege, both in the ability to access mood-regulating medication, and in her ability to talk openly about mental health issues without fear of consequence.

“There have been a lot of people asking, you know, ‘I don’t feel comfortable doing this, I could lose my job, I could be ostracized from my friends and family, does that make me a bad person?'” she tells us.

“[Wear Your Meds] is not for everyone, however much I wish it could be,” Weiss admits. “I understand that people in a position like me, you know, who are in an industry where I can be very open and not worry about being unemployed — like I’ve said before, I can do the heavy lifting. And these buttons are for those people, and hopefully it can spread from there.”

(Photos via Wear Your Meds)

Kat Armstrong
Kat has been a writer, social media maven and mom for longer than she's willing to admit. She's also spent time in front of and behind the camera, interviewing celebs, politicians and acting as a producer for fashion and artistic photography shoots. When she isn't writing for various orgs and publications, she's hanging with her kids, husband and French Bulldog, Peter, in Toronto, Canada.
Activism
Womens Health
Activism Mental Health Taking Care Womens Health
More From Womens Health