The 10 Weirdest Hotels in the World 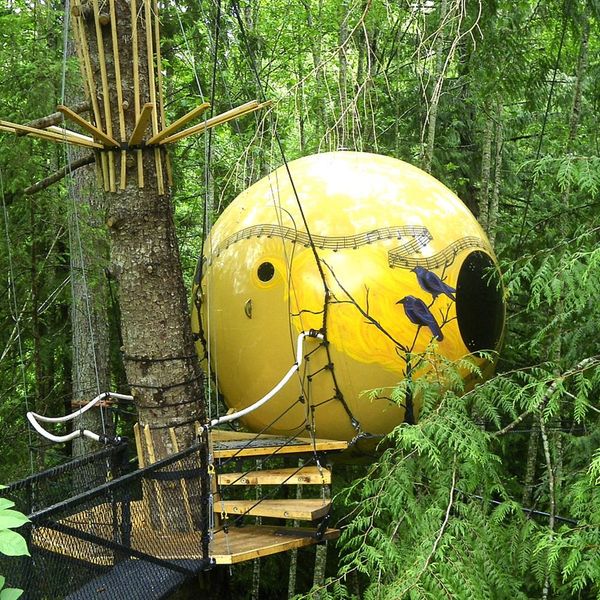 Now that places like crazy colorful hotels and their art-infused rooms exist, there’s really no going back to ordinary. Since it seems like there’s something for everyone these days — from must-visit foodie hotels to haunted Airbnbs — creativity is becoming competition. These 10 unusual hotels give each other a run for their money, leaving us scratching our heads at some and immediately booking others.

2. Magic Mountain Lodge: In the heart of the Chilean Patagonian Rainforest at the Huilo Huilo nature reserve, these lodgings are as far from industrial as you can get. The reserve is an incredible utopia of architecture inspired by the surroundings, with running rivers and wandering geese very much included. (Photo via Huilo Huilo)

3. Amsterdam Zaandam: For a hotel that looks like it’s straight out of Willy Wonka’s factory, check out the Zaandam in the Netherlands. It’s a hodgepodge of traditional-style houses, stacked together with an aesthetic similar to a kid’s building blocks creation. (Photo via Inntel Hotels)

4. The Hobbit Motel: Any true Lord of the Rings fan has to jump at the opportunity to stay in hobbit-style housing, especially in New Zealand, where the movies were filmed. These motel abodes, along with the other quirky constructions nearby (a plane, a train and a ship!), are very literally the stuff of fiction. (Photo via Woodlyn Park)

5. Crazy House: Though this one won’t be ready until 2020, we’re marking our calendars. This Vietnamese guesthouse (previously referred to as Hang Nga Villa) is part nature, part surrealist architecture — and entirely awesome. (Photo via Crazy House)

6. Palacio de Sal: They actually ask you not to lick the walls… because they’re made completely of salt. Walls, ceilings, tables — everything. It makes sense for a hotel located in the salt flats of Uyuni, Bolivia, but it still blows our minds. (Photo via Palacio de Sal)

7. Panda Inn: This. Can’t. Be. Real. Apparently anything goes in China, including a hotel with a fully committed panda theme. It would be cute if the staff didn’t also dress as pandas — kinda creepy. (Photo via AFP/Getty)

8. Tree Hotel: With room names like the Mirrorcube, the UFO and the Bird’s Nest, it’s not really surprising that this hotel in Sweden made the cut for our weird list. Each bizarre room is built within the trees and accessed by ladders at least 13 feet tall to really get your feet off the ground. (Photo via Tree Hotel)

9. Hotel Jested: Straight out of the 1960s, this active hotel and national cultural monument sits atop a prestigious mountain in the Czech Republic. All architectural significance aside, we can’t decide if it looks more like a futuristic Hershey’s kiss or a discarded space craft. Either way, you’ll feel like you’re in a James Bond movie while staying here. (Photo via Jested)

10. Free Spirit Spheres: These giant, eyeball-looking rooms are obviously part of the globally popular movement toward nature escapes, but these wacky hanging globes especially caught our attention. A Vancouver-based architect creates each one by hand, and suspends them himself for maximum nature viewing — a free spirit’s paradise. (Photo via Free Spirit Spheres)

Where is the strangest hotel you’ve visited? Tell us @BritandCo.

Margaret Ulrich
Margaret Ulrich is a writer and wanderer currently living in Phnom Penh, Cambodia. Her obsession with health and wellness has led her to scour the globe, gaining firsthand experience with both cutting edge therapies and ancient techniques. Unsurprisingly, she teaches yoga, practices reiki, and compliments her plants when she waters them.
Travel