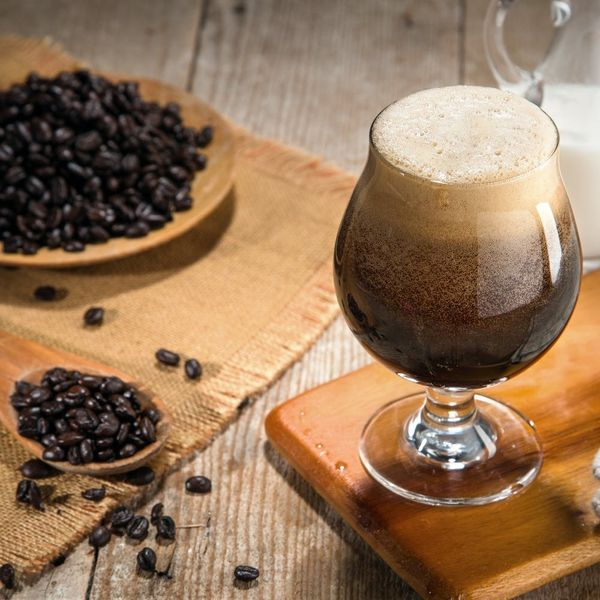 Any coffee lover knows that trendy takes on the beverage are nothing new. From cold brew to coffee cones (yup, that’s coffee in an ice cream cone), there’s always something fresh happening on the java scene. For hard-core enthusiasts, the quest for the perfect cup of coffee is never over, and any exciting new ways to drink it are just part of the fun. That’s why we’re *pretty* excited that nitro coffee is gaining popularity, not just in ahead-of-the-curve coffee shops, but also nationwide and in major grocery chains, as well as in wellness communities.

Basically, nitro coffee is cold brew infused with nitrogen gas. The idea of infusing a drink with gas might seem weird, but it’s the same thing that powers your sparkling water habit, only with nitrogen subbed in for carbon dioxide. In contrast to the bubbles in carbonated drinks, nitrogen adds a thick, frothy quality to liquids, resulting in an iced coffee that has a foamy, almost milkshake-like quality. One might even say the texture is similar to beer. Then there’s the “mouth feel,” which is described as thicker and smoother than regular iced coffee.

If you’re wondering why anyone would bother to drink this stuff aside from the unique texture, there are actually several health benefits to switching to a nitro brew. First, adding nitrogen adds a creamy texture to the coffee, according to La Colombe, a coffee shop that offers a canned nitro “draft latte” in their cafes, on their website, and in grocery stores around the country. This creaminess is a serious plus for those who don’t want to add milk — dairy or otherwise — to their brew. Secondly, aficionados say that nitro brew has a distinctly sweet flavor without needing any sugar. Of course, that doesn’t stop people from adding simple syrup and other sweeteners for an even more intense flavor, but for those who like their coffee pure, the hint of sweetness does the trick. Lastly, nitro coffee is often made with cold brew, which is less acidic than the traditional hot stuff, meaning it’s easier on your stomach and less likely to cause annoying symptoms like heartburn.

While nitro brew was initially only served from the tap in specialty coffee shops (Cuvée Coffee in Austin, Texas is said to be the first place to serve it back in 2012), the beverage is now available in cans from coffee purveyors like Stumptown, Rise Brewing Co., and Califia Farms. If you doubted that nitro brews have really “made it,” as of last year, you can even get it on draft at some Starbucks locations. Dunkin Donuts is the latest major chain to test the coffee in a limited number of locations.

Even more exciting, some fitness studios in various parts of the country, like Vibetality Yoga in Chandler, AZ, are starting to serve nitro coffee as a pre- or post-workout treat. Jillian Michaels recently purchased a cold brew company called Lucky Jack, which makes their own version of the buzzy drink. Since nitro brew doesn’t need milk or sugar to taste delicious, it makes sense that the fitness-conscious set is low-key obsessed with it. Plus, research shows that having a small amount of caffeine about an hour before a workout can boost your performance and even help you enjoy your workout more. Seems like a pretty perfect reason to give it a try.

Have you ever had nitro coffee? Tell us what you thought about it @BritandCo!

Julia Malacoff
Julia is a writer, editor and proud life-long vegetarian based in Brooklyn, NY. An avid traveler, meditation enthusiast and exercise junkie, she stays active in every new locale she visits.
Coffee
Health
Coffee Food Trends
More From Health