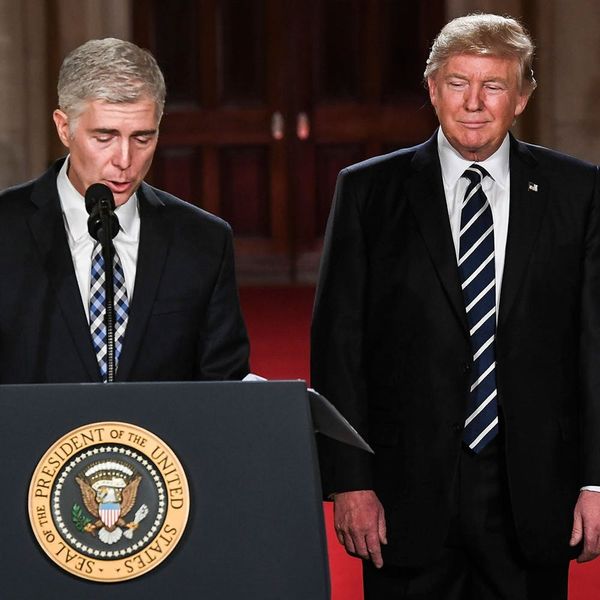 Last night, President Trump finally announced his nomination for the Supreme Court Justice set to replace the late Antonin Scalia. That nomination went to Neil Gorsuch. Gorsuch was on Trump’s shortlist for some time, and it was leaked earlier in the day via Rogue POTUS Staff’s twitter account that he would be selected. Considering Trump’s vocal stance on working to overturn Roe v. Wade, this nomination has been anxiously anticipated. If you’re wondering who exactly Neil Gorsuch is and where he stands on some of the important issues, here’s a quick rundown.

Gorsuch is a Colorado native who studied at Columbia, where he earned his bachelor’s degree in three years. He also went on to study at Harvard and Oxford. Gorsuch has worked for multiple supreme court justices and at a prominent DC law firm, and served in George W. Bush’s Justice Department for two years. In 2006, Bush appointed him to a seat on the 10th Circuit, a federal court that rules over eight districts in the Southwest. While Gorsuch is considered to be a conservative, he currently resides in the liberal town of Boulder, Colorado, where he teaches at the University of Colorado’s law school. (h/t Politico)

WHERE HE STANDS ON WOMEN’S ISSUES

Trump has said before that he plans to appoint a pro-life judge who will help work to overturn Roe v. Wade. While Gorsuch has not made any specific comments about his stance on abortion, he has ruled in ways that indicate he leans toward a pro-life position, some of which can be seen through his favoring of religious freedom rights.

One of his most notable cases involved the craft supply store Hobby Lobby back in 2012. Under Obama’s ACA, Hobby Lobby was required to cover certain birth control options for their employees. The business fought this mandatory condition, as it is run by Christian couple David and Barbara Green, who are religiously opposed to contraception. Gorsuch was in the 5-3 majority that sided with Hobby Lobby. The case eventually went on to the Supreme Court, which agreed with that majority.

On this case, Gorsuch has said, “To violate their religious faith by lending an impermissible degree of assistance to conduct their religion teaches to be gravely wrong […] The mandate compels Hobby Lobby and Mardel to underwrite payments for drugs or devices that can have the effect of destroying a fertilized human egg.” His basis for this ruling was primarily focused on religious freedom.

A few other indications that Gorsuch might favor a pro-life stance: According to a statement issued to us by NARAL Pro Choice America on Gorsuch, he has contributed and/or worked for a handful of pro-life officials over the course of his career, including Bill Frist, John McCain, George W. Bush and Associate Justice Byron White. He also wrote a book opposing assisted suicide. In that book he writes, “All human beings are intrinsically valuable and the intentional taking of human life by private persons is always wrong.”

WHERE HE STANDS ON LGBTQ+ ISSUES

While Gorsuch has not made public comments declaring his stance on LGBTWQ+ issues, he has been frequently compared to his predecessor Antonin Scalia, who has made numerous comments opposing this community.

In a statement on his nomination, Chad Griffin, president of the Human Rights Campaign writes, “Since the moment he stepped foot in the Oval Office, President Trump has attacked equality. He has signed executive orders that undermine our country’s most cherished values and appointed anti-LGBTQ cabinet nominees who have spent their careers undermining civil rights. And now, he has nominated Judge Gorsuch to the Supreme Court, fulfilling his campaign promise to nominate a justice in the mold of Antonin Scalia, one of the most vehemently anti-LGBTQ justices to ever sit on the court, who once went so far as to compare gay people to murderers. The Supreme Court has played a central role in advancing the promise of equality for LGBTQ Americans, and Judge Gorsuch’s anti-equality record — from opposing crucial medical treatment for a transgender person to supporting a license to discriminate for private corporations — make him unfit to sit on the nation’s highest court.”

WHERE HE STANDS ON IMMIGRATION ISSUES

Here is yet another area where Gorsuch doesn’t have a clear public stance. Considering the amount of legal action that has taken place surrounding Trump’s recently imposed Muslim ban, this could be something that the Supreme Court rules on.

A report by Forbes states, “In a decision last year he expressed deep concern about the due-process rights of an immigrant whose request for residency status was rejected by the Board of Immigration Appeals after it applied a law retroactively to his case. In that case, Gorsuch also fired a broadside against the practice of allowing agencies to interpret the law.”

Gorsuch now needs to be confirmed by the Senate. Considering Republicans are currently in the majority and all of Trump’s other nominations have passed thus far, it is expected that Gorsuch will be confirmed. But that won’t come without a fight from the Democrats in the Senate. However, that’s a bit of a tricky situation.

According to NBC, the 14 Supreme Court nominees who have been nominated since 1975 have waited an average of about 67 days to be voted on by the Senate. To be confirmed, Gorsuch only needs a simple majority.