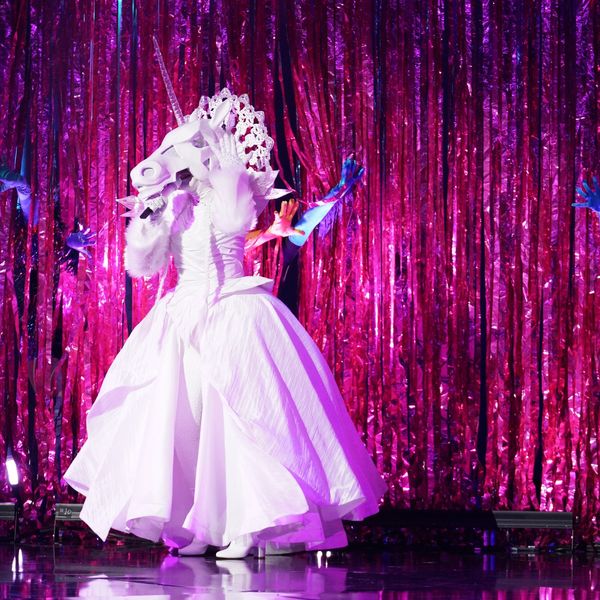 If you've been combing the winter 2019 TV schedule for your next favorite show, you might have noticed that a lot of the new series are competition shows. In addition to legacy singing competitions like The Voice and American Idol, as well as reality TV pioneers such as Big Brother and Survivor — going into their 21st and 38th (!) seasons, respectively — there's a new crop of competitive series that promise celebrities singing in disguise and everyday people striving for greatness alongside The Rock. Here's our guide to the (sometimes wild) new reality competition shows premiering this winter. (Photos via Food Network + Michael Becker/Fox + Vivian Zink/NBC + Brian Bowen Smith/Fox)

The Masked Singer (Fox, Wednesdays, 9pm): It's possible you've already heard of or even become obsessed with Fox's The Masked Singer by now. The series, which originated in South Korea before being adapted for US audiences, is hosted by Nick Cannon and features a panel of judges including Jenny McCarthy, Ken Jeong, Nicole Scherzinger, and Robin Thicke. The contestants are celebrities, too — but neither viewers nor judges know their identities. They dress in elaborate head-to-toe costumes, perform popular songs, and offer up vague clues to try to get the judges to guess who they are. In the January 2 series premiere, the eliminated celebrity was Antonio Brown of the Pittsburgh Steelers, but given that the competing celebs apparently have 65 Grammy Awards among them, we're expecting some stellar musical talent to appear as well. It's exactly as bonkers as it sounds. (Photo via Michael Becker/Fox)

The Titan Games (NBC, Thursdays, 8pm): Honestly, why wouldn't Dwayne "The Rock" Johnson host an athletic reality competition show? Titan Games features Ninja Warrior-esque obstacle courses on which 64 male and female athletes compete against each other (not against the course) for a chance to be named Titan and win $100,000. The workouts were inspired by Johnson's own real-life workouts, and the movie star — who has a known soft spot for inspiring stories — participated in the casting, making sure to look for people who, like him, had overcome personal obstacles and challenges in their lives. Johnson gives the contestants motivational pep talks before they take to the course, and it's both entertaining and awe inspiring to watch. (Photo via Vivian Zink/NBC)

Winner Cake All (Food Network, Mondays, 10pm): If you didn't get your fill of baking competition shows over the holidays, Giada De Laurentiis has a delightful new cake-baking competition show to keep you entertained. The series finds the cheerful Giada Entertains host challenging competitors to create epic cakes not only for specific client celebrations such as baby showers and homecomings, but also for thematic episodes that see them making game-day cakes for NFL player Rashad Jennings and Guy's Grocery Games-themed cakes for — you guessed it — Guy Fieri. (Photo via Food Network)

America's Got Talent: The Champions (NBC, Mondays, 8pm): The new edition of America's Got Talent puts previous winners, runners-up, finalists, semi-finalists, and other standout contestants from the history of the show back onstage to face each other for the first time. The competitors aren't the only familiar faces: Longtime judges Simon Cowell, Mel B., Heidi Klum, and Howie Mandel make up the panel, while Brooklyn Nine-Nine star Terry Crews hosts. If the premiere episode — which featured the triumphant return of season 3 second-place winner Susan Boyle — is any indication, it's going to be a tear-jerking watch. Like usual! (Photo via Trae Patton/NBC)

The World's Best (CBS, Sundays, Starting February 3, 10pm): James Corden hosts this new CBS talent competition show, which — not unlike NBC favorite America's Got Talent — will feature competing acts of every type imaginable. Here, though, the contestants hail from all over the world and have to not only impress judges Drew Barrymore, Ru Paul, and Faith Hill, but also break through the "wall of the world," which features the most accomplished experts in every field of entertainment. The winner will be crowned the World's Best. (Photo via Monty Brinton/CBS)

Mental Samurai (Fox, Tuesdays, Starting February 26, 9pm): There are several new obstacle-course shows premiering this winter, but Fox promises the first obstacle course for your mind on Mental Samurai. Contestants must quickly and precisely answer knowledge-based questions — while, for some reason, they're strapped into and spun around in a 360-degree rotating capsule. Rob Lowe hosts. (Photo via Brian Bowen Smith/Fox)

Million Dollar Mile (CBS, Wednesdays, Starting March 27, 9pm): Former NFL quarterback Tim Tebow hosts an athletic competition series that's more high stakes than most: Contestants have a chance to win a huge $1 million prize every time they run the Million Dollar Mile. But the obstacle course is the "most challenging course ever designed" — and it features additional attempted sabotages from elite athletes along the way. (Photo via Michael Yarish/CBS)