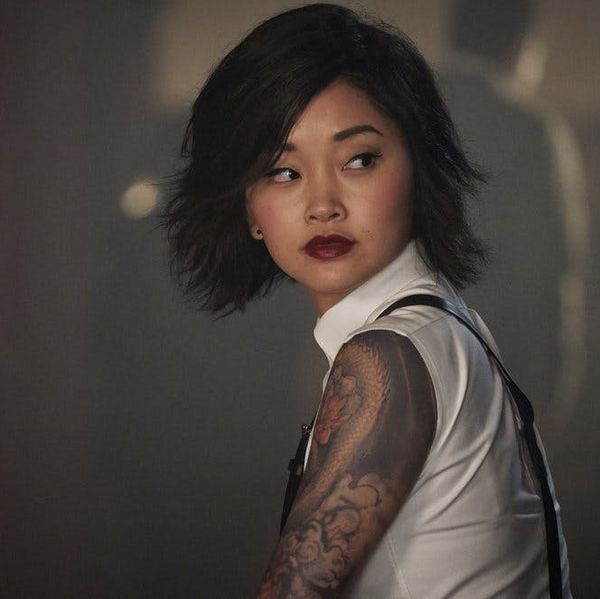 After the holidays, all of your favorite TV shows return from their midseason hiatus to resolve any dramatic fall finale cliffhangers and keep you entertained until spring. But there are always a crop of new shows that make their debuts midseason, too, and often, you'll find a new favorite where you least expected it. Check out all the new midseason TV shows premiering in the winter of 2019. (Photos via Sonja Flemming/CBS + Allen Fraser/Syfy + Ursula Coyote/The CW + Freeform/Beth Dubber)

The Masked Singer (Fox, January 2, 9pm): In this "top-secret singing competition," celebrities disguise themselves in elaborate costumes to perform for a panel of judges including Ken Jeong, Nicole Scherzinger, Jenny McCarthy, and Robin Thicke. (Photo via Michael Becker/Fox)

The Titan Games (NBC, January 3, 8pm): Dwayne "The Rock" Johnson makes his way to TV to put everyday people through intense tests of physical and mental strength and endurance. The winners then compete in the ultimate challenge on Mount Olympus for the chance to become a Titan. (Photo via Vivian Zink/NBC)

America's Got Talent: The Champions (NBC, January 7, 8pm): The most memorable acts from AGT return to compete for the first-ever title of AGT Champion. Terry Crews will host the "all-stars" competition, while Simon Cowell, Mel B, Heidi Klum, and Howie Mandel will appear as judges. (Photo via Trae Patton/NBC)

Good Trouble (Freeform, January 8, 8pm): Fans said a tearful goodbye to The Fosters in 2018, but 2019 brings a spinoff featuring Callie (Maia Mitchell) and Mariana (Cierra Ramirez) front and center. Together, the adoptive sisters move to Los Angeles to start their adult lives, figuring out exactly where those lives intertwine and separate along the way. (Photo via Freeform/Gus&Lo)

Schooled (ABC, January 9, 8:30pm): The Goldbergs spinoff Schooled will finally premiere in January after initially airing as a one-off episode earlier this year. Brian Callan and AJ Michalka will reprise their roles as Mr. Mellor and Lainey Lewis, respectively, alongside Tim Meadows and Jane the Virgin's Brett Dier. (Photo via ABC/Craig Sjodin)

Fam (CBS, January 10, 9:30pm): Nina Dobrev returns to a leading TV role as Clem, a woman close to having what she sees as the perfect life with her fiancé (Tone Bell) — until her delinquent 16-year-old half-sister unexpectedly comes to live with her. (Photo via Sonja Flemming/CBS)

The Passage (Fox, January 14, 9pm): Based on the Justin Cronin book series of the same name, The Passage follows Federal Agent Brad Wolgast (Mark-Paul Gosselaar) as he works to protect Amy (Saniyya Sidney), the test subject for an experimental and dangerous virus that has the potential to cure all disease — but also to wipe out the entire human race. (Photo via Eliza Morse/Fox)

Roswell, New Mexico (The CW, January 15, 9pm): The CW's latest reboot takes a page from its 1999 predecessor in that it focuses on the relationship between average Roswellian Liz (Jeanine Mason) and secret alien visitor Max (Nathan Parsons). But it also takes cues from the current political climate, as Liz is the daughter of undocumented immigrants and, between her parents and Max, who works as a police officer, often deals with the realities of injustice and inequality. (Photo via Ursula Coyote/The CW)

Deadly Class (Syfy, January 16, 10pm): You fell in love with her in the Netflix rom-com To All the Boys I've Loved Before, and now you get to see breakout star Lana Condor as a teenaged assassin in her new Syfy show. Based on the comic book series of the same name, Deadly Class follows the lives of students at a high school where they train to become top assassins for crime families around the world. (Photo via Allen Fraser/Syfy)

Black Monday (Showtime, January 20, 10pm): Don Cheadle and Regina Hall star in this comedy about a group of outsiders who take on the old boys' club and cause the great stock market crash of 1987. Paul Scheer, Casey Wilson, Andrew Rannells, and more also appear. (Photo via Miller Mobley/Showtime)

The World's Best (CBS, February 3, 10pm): If you have room in your TV schedule for a new reality competition show, CBS is bringing The World's Best to your home this winter. Described as a "global talent competition that features acts from every genre imaginable, from every corner of the planet," the show will challenge contestants to not only wow US judges, but also break through the "wall of the world," featuring 50 of the world's most accomplished experts from every part of the entertainment industry. James Corden hosts, with Drew Barrymore, RuPaul, and Faith Hill serving as the American judges. (Photo via Monty Brinton/CBS)

Miracle Workers (TBS, February 12, 10:30pm): Daniel Radcliffe stars as Craig, a low-level angel in charge of handling all human prayers. When his boss, God (played by Steve Buscemi), starts slacking on his duties, Craig has to pick up the slack or risk the destruction of Earth. (Photo via Frederick M. Brown/Getty Images)

Proven Innocent (Fox, February 15, 9pm): Rachelle Lefevre (Under the Dome) stars as Madeline Scott, a lawyer in charge of a firm that overturns wrongful convictions. Madeline herself was convicted of murder when she was just 18, and although her sentence was later overturned, there's at least one person who still thinks she's guilty: harsh state attorney Gore Bellows (Kelsey Grammer), the man who initially put her behind bars. (Photo via Adrian Burrows/Fox)

Whiskey Cavalier (ABC, February 27, 10pm): After going through a heartbreaking split, FBI agent Will Chase (Scott Foley), AKA Whiskey Cavalier, is assigned to work with the tough-as-nails Francesca Trowbridge (The Walking Dead's Lauren Cohan). Their dynamic turns out to be just what he needs as they lead their department through life-saving missions, romance, office politics, and more. (Photo via ABC/Larry D. Horricks)

The Village (NBC, March 12, 10pm): The Village is a Brooklyn apartment building whose inhabitants have done something rare in a big city — they've formed their own family of friends and neighbors. Some of the characters you can expect to meet include Sarah (Michaela McManus, SEAL Team), a single mom and nurse; Gabe (Daren Kagasoff, The Secret Life of the American Teenager); Nick (Warren Christie), a war vet; and the building's "heart and soul," Ron (Frankie Faison) and Patricia (Lorraine Toussaint). (Photo via Peter Kramer/NBC)

The Fix (ABC, March 18, 10pm): Robin Tunney plays Maya Travis, a former LA district attorney who left town after prosecuting a famous actor for murder and losing the case. When that same actor becomes a suspect in another murder years later, she returns for a second chance at justice. (Photo via ABC/Eric McCandless)

Million Dollar Mile (CBS, March 27, 9pm): Tim Tebow hosts this athletic competition show from LeBron James, featuring contestants who must complete an obstacle-filled mile while at the same time facing attempted sabotage by elite athletes. There's a lot on the line with a $1 million prize — plus, who would want to let down LeBron? (Photo via Michael Yarish/CBS)

Abby's (NBC, Date/Time TBA): Natalie Morales (Santa Clarita Diet) is Abby, the proprietor of her own backyard San Diego bar, where cell phones are banned and you have to work your way up to a coveted seat. The feel-good, makeshift-family comedy comes from the hearts and minds behind The Good Place, so it's probably going to be pretty charming. (Photo via Justin Lubin/NBC)

The Red Line (CBS, Date/Time TBA): Noah Wyle stars in this drama about the shooting of a Black doctor at the hands of a white police officer, and the ways in which the tragedy ripples through both of their families. (Photo via Elizabeth Morris/CBS)