The Wizarding World of Harry Potter Is a Surprise Foodie Paradise 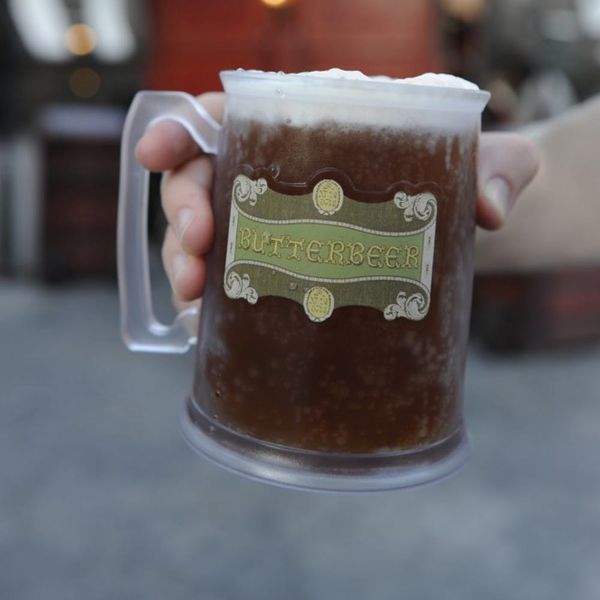 It’s here! It’s finally here! All you west coast Harry Potter fans can stop turning green with envy at your Floridian counterparts now that the Wizarding World of Harry Potter has come to Universal Studios Hollywood. Though the park officially opens Thursday, April 7th, there have been a few tech rehearsals, otherwise known as a “soft openings,” where guests are allowed to explore the park as part of a rehearsal for staff leading up to the real thing. However, if you have yet to visit the amazing realm of Harry Potter and everything *magical* you’re in for a treat.

When I visited the park during a tech rehearsal day, I was lucky enough to explore everything from the Hogwarts Express to Hogsmeade Village to Hogwarts Castle. I rode the 3D motion-based Harry Potter and the Forbidden Journey ride and even got the chance to try a Ravenclaw cloak on for size (my house according to Pottermore). But the most memorable takeaways from my opportune trip were definitely the delicious noms the wizarding world had to offer.

Aside from the stand-alone carts located throughout the village such as the Magic Neep and Butterbeer carts, the #1 place to grab a bite to eat in Hogsmeade is The Three Broomsticks.

The aged rustic tavern is where muggles and magic folk alike can enjoy authentic and delicious English meals such as Shepherd’s Pie (ground beef and vegetables, crowned with potatoes) and finish off with a yummy dessert like sticky toffee pudding.

For myself, I chose to go with the traditional Bangers & Mash (savory grilled English sausages with creamy mashed potatoes and minted peas) and even got a taste of the long-awaited Butterbeer *cue angels’ chorus*. And yup, it was just as amazing as I first imagined after reading it in the Sorcerer’s Stone. The best part? Guests can choose one of three different ways (frozen, iced or hot). Pro tip: go for the frozen Butterbeer! It’s like a butterscotch-y slush of pure deliciousness.

From all the shops lining Hogsmeade, Ollivanders included, I spent the longest time in Honeydukes, the confectionary shop known to boast Bertie Bott’s Every-Flavour Beans and Chocolate Frogs. I’ll admit it took me awhile to finally decide what I was going to leave with. TBH, I wanted everything from the Fizzing Whizzbees down to the bottled Pumpkin Juice. Another side note: I was completely blown away by the details — even the packaging! I did finally manage to leave with the two most popular sweets: Bertie Bott’s + Chocolate Frogs (I got Godric Gryffindor!). After a good number of hours, I bid the wizarding world adieu with only my sweets to keep me preoccupied until the next time. Alas, I have yet to try ear wax! (Thank goodness)

Because of the long-awaited opening, tickets to Universal Studios Hollywood for the opening day on April 7 are sold out, marking the first time ever that the theme park has had to halt online ticketing transactions. “We have been getting ready for this exciting day for the past five years and share the exhilaration with those guests who’ve made April 7th a sell-out day,” said Larry Kurzweil, President, Universal Studios Hollywood. “This incredible consumer demand speaks largely to the arrival of ‘The Wizarding World of Harry Potter,’ and the dramatic 75 percent transformation of Universal Studios Hollywood into an entirely new destination.”

You can purchase your tickets via EZ Rez™. Don’t wait — they’re selling like hot (Cauldron) Cakes! So what’re you waiting for? Snag yours now!