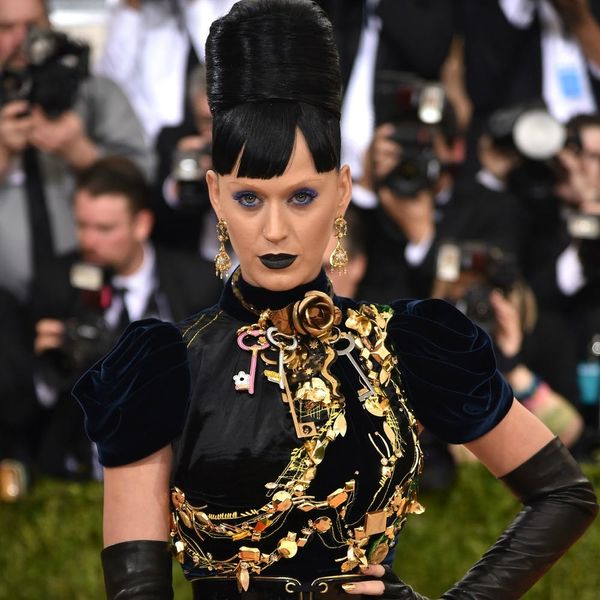 The most stylish night of the year has come and gone with the passing of last night’s Met Gala, and though we’re still recovering from all of the mind-numbing red carpet action (engagements! Baby bumps! Couples debuts! Oh, my!), it was fashion itself that had the biggest role to play in what turned out to be a rather magical evening. An original and thought-provoking theme (Manus x Machine: Fashion in an Age of Technology) paired with a mind-blowing VIP guest list had the stars not only turning out in droves for the occasion, but shining their very brightest. With no shortage of sensational looks to peruse, choosing favorites was no easy task, but we managed to narrow it down to 17 completely jaw-dropping looks. Read on to see who made our final cut!

1. Katy Perry: Katy Perry has been noticeably absent from the red carpet this awards season save for her Golden Globes bump-it, and now, we think we just might have an inkling as to why: She’s been saving all her gusto for this absolutely legendary Met Gala ensemble! Can we all just take a second to bow down to the regalness that is this velvet Prada extravaganza with padlock detailing? Almost unrecognizable with (bleached? shaved?) brows, intentionally severe hair and makeup and fingerless leather gloves, no one held a candle to Katy when it came to couture. (Photo via Larry Busacca/Getty)

2. Poppy Delevingne: While Katy was a shoe-in for the evening’s most-high fashion look, Cara’s big sis just may have been our overall favorite in this flapper-esque Marchesa creation. Futuristic? Check. Unique? Check. Completely out of this world? Triple check. (Photo via Larry Busacca/Getty)

3. Taylor Swift: Taylor Swift REPRESENTED as Met Gala co-chair, taking the event’s theme to the extreme and having a blast in the process. That Louis Vuitton dress! Those lips! The shoes! If this is the new Taylor, we can’t WAIT to see more of it. Nailed it! (Photo via Larry Busacca/Getty)

4. Rita Ora: They say looking good is the best revenge, and if Rita Ora has any misgivings about that whole Beyhive sitch (although we’re guessing not, considering she took a pic with Bey at the event), she certainly showed ‘em in this Vera Wang headturner. Boasting cutouts like we’ve never seen (check out those gams!), sheer side panels and a flowing metallic feathered bottom, this look is pretty much TDF. (Photo via Larry Busacca/Getty)

5. Zoe Saldana: Looking like a beautiful peacock, Zoe Saldana owned the red carpet staircase in particular with this colorful feathered Dolce & Gabbana number with exaggerated (and we do mean exaggerated!) train. (Photo via Larry Busacca/Getty)

6. Karolina Kurkova: Victoria’s Secret model Karolina Kurkova completely wowed in this Marchesa masterpiece. Beautifully ornate with its structural floral applique, this dress was nothing short of a work of art. (Photo via Dimitrios Kambouris/Getty)

7. Claire Danes: We love this look so much, we didn’t even care that Claire Danes’ Zac Posen gown appeared completely off-theme (no metal or machinery here, although the dress did include a hidden tech-y glow-in-the-dark element). The anti-machina in this real-life Cinderella fairytale princess frock (fit for a Disney wedding!), Claire’s look is a dream come true, outshining nearly all around her. (Photo via Dimitrios Kambouris/Getty)

8. Rachel McAdams: Second only to Katy in the couture department, Rachel McAdams was a total knockout in this Valentino getup. Emblazoned with lines from Dante’s Divine Comedy, this dress was truly one-of-a-kind (and those Taylor-approved vamp lips didn’t hurt, either!) (Photo via Larry Busacca/Getty)

9. Sienna Miller: We can’t take our eyes off the Gucci stunner Sienna Miller chose for the star-studded affair. Though perhaps less on-theme than some of our earlier picks, she does look superhuman here, so maybe it’s not so off the mark after all. (Photo via Larry Busacca/Getty)

10. Kate Bosworth: Just try telling Kate Bosworth there’s already a royal Kate on the circuit (and she’s on the cover of British Vogue, no less)! Looking like an absolute Queen in this Dolce & Gabbana number, Kate B. surely could’ve fooled us — she’s even got a crown of sorts! (Photo via Dimitrios Kambouris/Getty)

11. Kate Hudson: Not to be outdone, the other Kate (that’s Hudson, natch), also brought the heat in this geometric Versace smash with intricate cutouts on top and a dainty tulle bottom. (Photo via Dimitrios Kambouris/Getty)

12: Jourdan Dunn: Jourdan Dunn won us over with this space-agey Givenchy frock. Completely on theme (girlfriend even has silver hair), this was a fun alternative to the more classic pieces on the red carpet. (Photo via Dimitrios Kambouris/Getty)

13: Zoe Deutch: We were downright fascinated by this floral Dolce & Gabanna gown with its strategic floral print and its centerpiece heart, a sure nod to the evening’s premise. (Photo by Dimitrios Kambouris/Getty)

14. Nina Dobrev: Nina? Is that you, or Princess Belle? Either way, we’re utterly enchanted — Marchesa for the win! (Photo via Dimitrios Kambouris/Getty)

15. Nicole Kidman: McQueen can do no wrong, as Nicole Kidman was all too happy to prove in this ethereal, yet on-theme interstellar showstopper (that gauzy cape, though!). (Photo via Larry Busacca/Getty)

16. Hailee Steinfeld: Both budget-friendly and stunningly beautiful, the emerald hue of Hailee’s H&M gown alone was enough to set it apart from the pack. So chic! (Photo via Dimitrios Kambouris/Getty)

17. Blake Lively: Rounding out our list was the glowing (rumored and totally unconfirmed) mom-to-be, who positively lit the carpet aglow in Burberry. (Photo via Dimitrios Kambouris/Getty)

Do you agree with our picks? Let us know over @BritandCo!

Nicole Briese
Nicole is the weekend editor for Brit + Co who loves bringing you all the latest buzz. When she's not busy typing away into the wee hours, you can usually find her canoodling with her fur babies, rooting around in a bookstore, or rocking out at a concert of some sort (Guns N' Roses forever!). Check out all her latest musings and past work at nicolebjean.com.
Red Carpet
Style News
Red Carpet
More From Style News