We Got Game. DIY Yard Games, That Is. 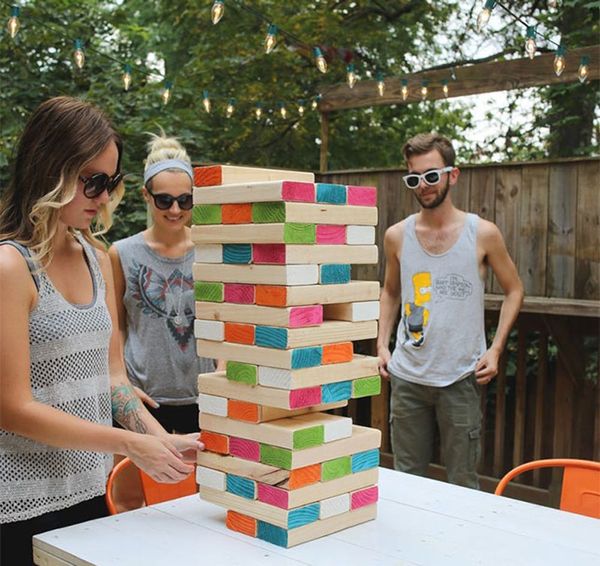 We hate to rub it in the faces of those still battling the cold, but spring has officially sprung in San Francisco and we’re itching to get outside and make the most of it. But rather than taking a stroll in the woods, riding our bikes around town or brown bagging it in the park (hey, don’t judge), we’ve decided to do something a little more playful and social. It’s called making our own yard games. And since we’re sure you’re going to want to follow suit once the snow melts, we’ve got a whole list of DIYs to take outside as soon as the temps hit sky high.

1. Painted Horseshoes: You guys. Is this the most beautiful horseshoe set you’ve ever seen in your life? If you say anything other than yes, we know you’re lying. (via Design Love Fest)

2. Ring Toss: You better believe we’re inviting these party animals to our next lawn games sporting event. (via And We Play)

3. Bean Bag Toss: May we present, the cutest and easiest game of bean bag toss that you’ve ever embarked on… and yet somehow, we still miss the target. (via Crafty Carnival Fun)

4. Designer Beer Pong Table: We’ve mentioned this patriotic playtime before. We’re mentioning it again and not so patiently waiting for the 4th of July… so we probably won’t actually wait until the 4th of July to break it out. (via Mr. Kate)

5. Cornhole: If by the time you’re done making the platforms, you find that you’re sick of DIY-ing, you can always buy the corn bags online. We swear we won’t tell your pals. (via DIY Network)

6. Big Bananagrams: Hey, nerds. It’s okay to get outside once and a while. You can even take your word games with you. (via Constantly Lovestruck)

7. Giant Jenga: You played regular Jenga. Then you hacked your very own version of drinking Jenga in college. And now you’re going big with giant Jenga, you little innovator you. (via A Beautiful Mess)

8. Gnome Lawn Bowling: Lawn gnomes now have a new purpose in life that they probably aren’t going to be too happy about. But really, how cute! (via Make)

9. Twister: Okay, sure. You could take your old contemporary-colored Twister mat out to the backyard, but that wouldn’t be nearly as pretty and hip as this one will be. (via Design Sponge)

10. Piñata Kit ($54): Probably one of the most fun things in the universe is banging open a piñata. Here’s a way you can make your very own without having to source all the bits and bobs. And if you wanted to fill it with plastic mini-bar bottles of booze, that would be alright with us too.

Got game in the great outdoors? Let us know what you’re doing yourself in the comments below.

Lex Monson
Alexis is the co-founder of Punkpost, the app that lets you send handwritten cards (yes, handwritten by a real human) in the amount of time it takes you to send a text message. The exclusive card collections are created by a community of artists and designers and hand letter pressed on high-quality cotton paper. Get the full experience by downloading the app from the iTunes Store.
Games
Home
Games
More From Home