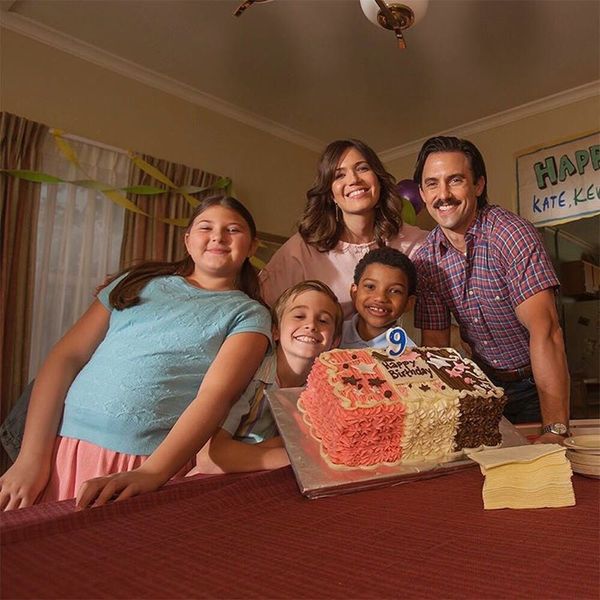 It’s not often that we’re totally in love with a show before the thing even airs, but ever since the first teaser for This Is Usappeared back in the spring of 2016, we knew this was going to be one of the best new shows of the year. And it has NOT disappointed.

Not only does it star Gilmore Girls‘ Jess — AKA Milo Ventimiglia — which would have been reason enough alone to be obsessed, but after just one episode and its HUGE twist ending, that was it. We were hooked, and the Pearson family was like our family.

This Is Us has already been renewed for seasons two AND three, which really speaks to just how much it resonates with people. It’s nothing if not an emotional rollercoaster, which is a huge part of the show’s appeal. If you don’t already read our weekly recaps, make sure to check them out, and if you need even MORE to tide you over ’til the next episode, here are just SOME of the endless moments from the show so far that keep us coming back for more (while sobbing big sopping piles of tears, natch). WARNING: This post contains spoilers!

1. When you connect all the dots. This Is Us is an earnestly emotional show, and while its vulnerability and rawness really resonates, it’s all of the jumping between the past and the present and the twists, turns and cliffhangers and the connections that brings that really keep us hooked.

2. When you learn The Big Three’s connection. For example, one of the show’s best twists remains the big ending of the very first episode — when we learn that Randall was actually adopted and that it was him, Kate and Kevin who Jack and Rebecca brought home from the hospital. Did you scream? We screamed.

3. When Rebecca and Miguel are all of a sudden together. In the second episode, Rebecca shows up to her son Randall’s house with “Grandpa,” and it’s NOT Jack, but his best friend, Miguel. WTF HAPPENED TO JACK? We needed to know.

4. When Kate introduces Toby to her dad and it’s an urn. This is when we find out that Jack died at some point and nope, can’t handle it. Next.

5. When Randall finds the letter. We’d already learned that Rebecca had actually met Randall’s biological dad in the past and decided she didn’t want him in Randall’s life. But when Randall discovers her secret and confronts her, we can’t handle what this means for their relationship.

6. Literally anything to do with Kate and Toby. From the moment they meet to their breakup and reconciliation to Toby’s medical emergency…

7. When we think Toby dies. The mid-season finale cliffhanger was a HEARTBREAKER. Toby and Kate had just gotten back together when he collapses from a heart attack and is rushed to the hospital. Then you had to wait like a MONTH for it to come back from hiatus. This show will NOT leave our emotions alone.

8.When the Pearson kids do The Big Three chant but as grown ups. BAWLING.

9. Literally any moment Jack and Rebecca are together. Though not perfect, these two have a loving and fun relationship, and it’s hard not to be totally smitten with their love. In the third episode, “Kyle,” they admit to each other that bonding with their adopted son Randall (then still named Kyle) had been very difficult, and they finally grieve the loss of their third biological baby. It’s beautiful and yep, we’re crying all over again.

10. Any time Jack is just being the best dad ever. There are so many amazing moments between Jack and his young children that make us ugly-cry. One that sticks out is in “The Pool” episode, when some girls were bullying Kate in her new Care Bears bikini and Jack gives Kate his “magic shirt,” reassuring her that she is perfect in his eyes.

11. Jack’s funeral. In episode 13, which just aired, we get our first glimpse at Jack’s funeral and are starting to learn more about his death. Are we ready for that? Nope. Not at all. But we’re in this for the long haul, and ready to find out what happened in the family as the season continues.

12. When Jack takes Rebecca to their old apartment. After Jack and Rebecca learned about Miguel and Sherry’s divorce, Jack doubles down on making sure the rough patches are only part of his and Rebecca’s marriage — not the end of the story. He rents out their old apartment (we’re willing to overlook the fact that apartments are never vacant and available for one-night rentals because it’s just TOO ROMANTIC), where they drink Champagne on the floor while reading their wedding vows. For just a second, everything is so perfect and okay, yep, crying again.

What’s your fave This Is Us moment so far? Let us know over @BritandCo!