This Is Us Season 1, Episode 13 Recap: Three Sentences 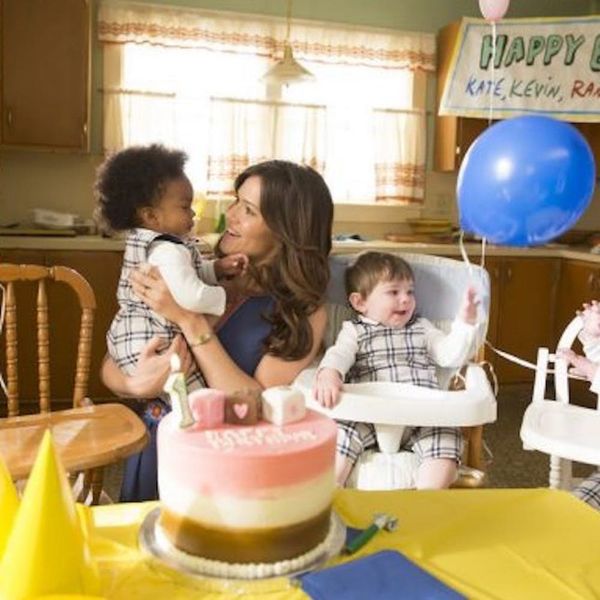 Happy birthday, Kate, Kevin, Randall and Big Daddy! After an episode that went rather in-depth about the Pearson family’s “Big Three,” this week’s flashback is focused on the kids’ 10th birthday. 10 is a big number: We’re talking double digits here! Which means that the kids are OVER their joint triplet birthday parties that routinely feature homemade cakes and pin-the-tail on the donkey. Kevin and Kate make this clear to their parents by calling their own family meeting, which they conveniently schedule during Mommy and Daddy’s cuddle time (look, all I’m sayin’ is that could’ve been a MUCH worse interruption).

Kate wants a Madonna party. Kevin wants a Princess Bride party, even though he was scared of the movie when he was nine. (I told you; 10 is a big number. So many things change!) Easygoing Randall doesn’t care one way or the other, but he does inform his parents that if you have a birthday party, you have to invite your entire class. It’s the rule. And man, these kids DO NOT PLAY AROUND. (Side note: Rebecca and Jack = #ALLTHERELATIONSHIPGOALS. Also, from the videos of previous years, we can see that Pearson birthday parties are messy and fun and kiiiind of put most birthdays I’ve had to shame, and I had some pretty darn good ones.)

While working on stuff for the party, Jack asks Rebecca if they can have another kid. “Remember what happened last time we tried to have a kid?” Rebecca asks. “We came home with three.” Girl’s got a point.

As for the actual parties, if previous Pearson parties seemed chaotic, these are even crazier. But, you know, that’s what you get with 45 kids in one locale. Kevin is running around with his best Mandy Patinkin impression (we always knew you had it in ya, Kev!) in one room. In another room, Kate’s dressed up as Madonna with all of her friends. But there are only three or so friends at Randall’s party outside, and Rebecca and Jack are clearly distressed. Randall’s okay with it, though — he’s a good kid. He knows that he has a few good friends that did show up, and that’s what matters. He’s not even bothered by the fact that Kevin and Rebecca have more guests than he does. RANDALL IS A GEM. And, because Randall is a gem, Rebecca seriously considers Jack’s earlier proposition. For a moment.

Kate’s not doing so well at her own party, though. She’s hiding out by herself because she thinks her friends like Kevin more than her. Jack does his best “dad-ing” — he jokes with her about her brother and makes her teach him how to vogue. But she still wants to be alone, so Jack respects that (Jack Pearson really is the best dad, y’all.)

The best dads in life will always vogue with you. #ThisIsUs pic.twitter.com/BOmdioJPs2

And as for Kevin? Well, he’s got the hots for Kate’s good friend Sophie. So much so that Jack finds out he basically wanted a party solely to impress her. As it turns out, Sophie likes him too: She even gives him a birthday card with a heart over the “I” in her name. THAT IS REAL LOVE. (No, really. Just you wait.)

At the end of the day, Jack and Rebecca are downright exhausted. Jack is upset he couldn’t make Kate feel better, and agrees they can’t have another kid right now. Their tiredness is interrupted by Kate, Randall and Kevin who are having a wrapping paper fight downstairs. Jack and Rebecca join in, and the night ends up as one big family affair, with the kids pulling out the old banner and pin-the-tail on the donkey after all. It would be great if the show didn’t end on another future glimpse of JACK’S FUNERAL, right? :(

The best ending to the best day. #ThisIsUs pic.twitter.com/ylgujEbeON

Kate discusses the bypass surgery she’s decided to have, only now… she doesn’t want to have it anymore, thanks to Toby’s heart attack. Her doctor suggests she try out a weight-loss immersion camp in the Adirondacks, and Kate gives her an emphatic no. But, she eventually relents, and her fiance Toby (HER FIANCE TOBY!!) drops her off. Kate gets the lay of the land, and is pretty much over it immediately when she finds out the camp favors emotional exercises over physical acts like going to the gym. “It feels like a cult,” she complains to Kevin when he calls. Anyway, then Kate meets Duke (Adam Bartley) and he’s basically a pushy annoyance. Kate’s not here for this.

Like her 10th birthday, Kate’s not doing well at fat camp. She walks out of a strange meditation/exercise session and gets in another annoying conversation with Duke. Somehow, he persuades her to go back and give the class another try, and this time, she gets into it. Oh, does she get into it! She gets emotional. She remembers moments in her life — her birthday, Jack voguing with her, the day her friends decided they didn’t want to be friends with her anymore… and Jack’s funeral. JACK’S. FUNERAL. (No, we’re not okay.) The worst part is, we still have no darn idea how or why or WHEN (though we assume from the shots that it has to be when the kids are in their teenage years, which hurts even more). Anyway, when all is said and done, Kate thanks Duke for pushing her. He thinks “this” is happening. Ha. HA. Okay.

Although Toby is pretty certain he can get along just fine in New York without knowing a soul (“If Macaulay Culkin can do it, so can I”), Kate enlists Kevin to be Toby’s wingman. Kevin takes Toby to a swanky bar, where he’s quick to point out that all the girls “look like Westworld hosts.” Kevin starts talking about his issues with women, and how he messed things up with both Olivia and Sloane. After his pep talk from Toby, Kevin has an epiphany that his REAL love is… none other than his ex-wife. Who was his childhood love. Who was SOPHIE (Alexandra Breckenridge). Yeah, apparently Kevin was married? Thanks for that curveball, This Is Us! He then shows up at her house and apologizes with a big movie-type speech and makes the grand gesture by telling her that she shouldn’t have gotten away. Sophie doesn’t know what to say.

The good news: William is off his chemo, and is experiencing what’s called “chemo boost.” William is feeling GOOD. The bad news: It’s really not a good time for this, because Randall is up for a big job opportunity. He’s sure he can do the work better than his colleague, but his day of work is interrupted when William shows up in all his chemo boost glory. Randall is easily persuaded into shopping with his dad, who wants to “meet his maker” by lookin’ good. This turns into Randall spending a majority of his day with his dad which is… actually not such a bad thing. William gets some designer sunglasses, then decides he wants an egg cream. (Side note, can we all just take a moment to appreciate that William understands REAL EGG CREAMS NEED FOX’S SYRUP? A man after my own egg-cream-loving heart.)

It takes them three different diners to find the perfect egg cream, and Randall’s getting agitated at the amount of time he’s spending away from the office. William makes him pull over so he can drink his egg cream, put on his sunglasses and get behind the wheel. See, William never learned to drive, and what better time to learn than RIGHT NOW, right? Luckily, Randall quickly realizes this is way better than his job.

William, you have no idea how cool you are. #ThisIsUs pic.twitter.com/o01M35sFxA

And now… gather round, readers! This week, we’re introducing “Pearson Points,” AKA a list of Jack Pearson’s “Best Dad Moments.” Each episode, we’ll rank the things that make Jack an awesome dad, and add ’em up. Sound good? We think so. So let’s award our first round of points!