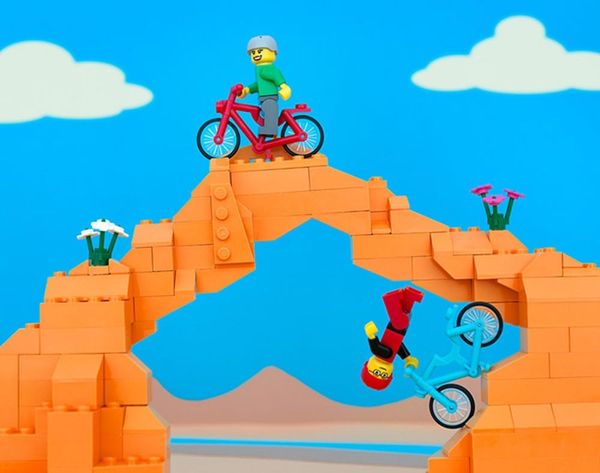 Just when you thought you had officially retired patriotic rally cries post-World Cup madness, photographer Jeff Friesen will have you chanting USA! USA! all over again at the sight of his project 50 States of LEGO. As the title suggests Friesen uses everyone’s favorite building blocks to create too-cute scenes of the land that spans from sea to shining sea.

You’ve never seen America like this before. Alaska’s majestic glaciers, Utah’s rocky national parks and Iowa’s vast + delicious corn fields are all playfully re-imagined at a tabletop scale. But Friesen makes his pictoramas even more delightful by including each state’s quirks + traditions into the LEGO-fied scenes, like Mississippi’s lip-smackin’ BBQ, California’s recycling obsession and Oregon’s free-range-certified food trucks. Even historical and cultural icons like Lady Liberty and Elvis make Brickhead appearances in their respective home state shots alongside the Johns and Janes that call America their home.

Friesen was first taken with LEGOs back in 2013 after his daughter June dubbed it her must-have toy of the year. (Can we just take a moment to give serious standing O to all the crazy creative dads out there?) After their first few playtimes, which according to Friesen always yielded “high-concept scenes,” Friesen started basing his projects on the 10 Canadian provinces before he moved on to replicate the melting pot of their neighbors to the South.

This isn’t the first time we’ve gawked at the project (oh, and don’t forget about Bricksey!), and it probably won’t be the last. Friesen has turned the 50 States of LEGO into a book that will be available online starting September 2 featuring all of the photos up on his website The Brick Fantastic plus 40 never-before-seen shots. Sounds like the perfect addition to your LEGO coffee table!

Are you feeling major state pride right now? What’s the coolest thing you’ve ever seen made out of LEGOs? Tell us in the comments below.